Proteins and Peptides
Proteins are 1 of the 3 primary macronutrients in the body and are synthesized from individual building blocks called amino acids (AAs). Amino acids are bound together by peptide bonds, which link the amino end of one AA to the carboxy end of the next AA, generating a protein's primary structure. The strand of AAs then undergoes additional folding, ultimately generating complex 3-dimensional structures. Proteins have a wide variety of functions, including catalytic, structural, regulatory, transport, storage, and immunologic functions. They are digested by proteases and peptidases secreted by the stomach and pancreas and absorbed as individual AAs in the small intestines through specialized transporters. There are countless medical conditions related to protein abnormalities, including abnormalities related to enzymes, receptors, membrane channels, hormones, accumulation of proteins, and autoimmune disorders.
read more 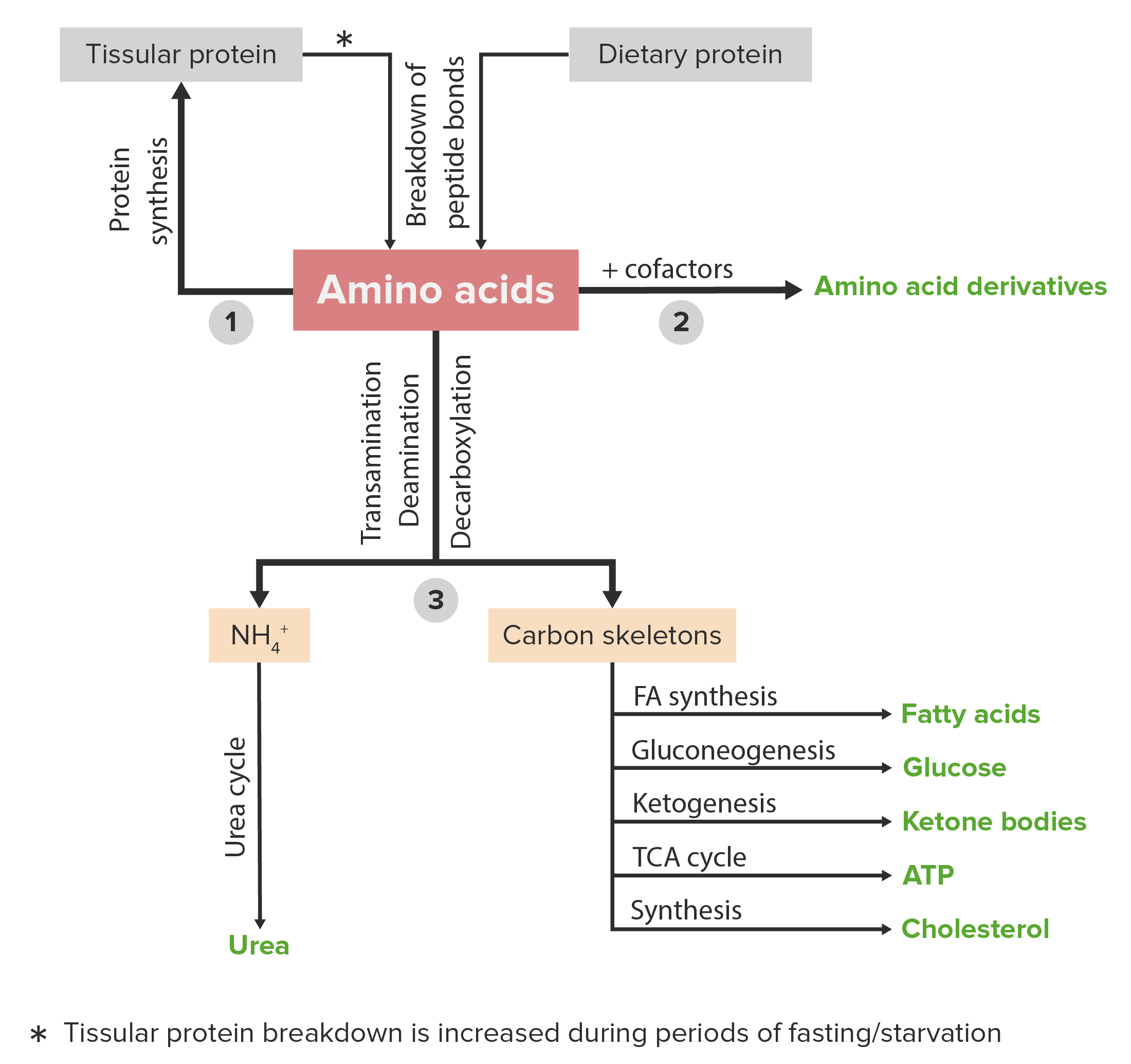 Catabolism of Amino Acids
Amino acids (AAs) can be acquired through the breakdown of intracellular or ingested dietary proteins. Amino acids can enter 3 metabolic routes within the body. They can 1) be recycled to synthesize new proteins; 2) combine with cofactors and substances to create amino acid derivatives; or 3) be catabolized into their functional groups and carbon skeletons. This process releases ammonium, which moves into the urea cycle and produces intermediates for energetic metabolic pathways.
read more
Load more
Share
Ask Questions
Take Notes
Download Slides
Report Mistake
Comments
show all Show less
My Notes
show all Show less
Learning Material 3
show all Show less
Report mistake
Transcript
0 of 0

00:01 Another important function the proteins perform and one of the most known functions that proteins perform, is that of catalyzing reactions. Catalysts of course can speed up reactions thousands of times and if we compare the speed with which a catalyst works, that's a chemical catalyst, and compare that to a biological catalyst like an enzyme in a cell, the remarkable difference in catalysis is mind-boggling. For example, a chemical catalyst can speed up the reaction 10,000 times, an enzyme can speed up a reaction over hundred and 80 quadrillion times. Now this is a really remarkable thing to think about. As we think of enzymes as catalysts, we recognize that the enzymes are doing some pretty remarkable things at the nanoscopic level, that are different and really make sense in a macroscopic world like we live. And this is partly illustrated on the figure on the screen. Consider the enzyme carbonic anhydrase for example. Carbonic anhydrase catalyzes a reaction that involves making carbonic acid in water. It has a turnover number associated with it of about 700,000. 01:06 What does that mean? Well what it means is that that enzyme is catalyzing the formation of 700,000 molecules of product every second. That's one molecule of enzyme. Now it is pretty hard to imagine in the macroscopic world doing anything one a second, let alone 700,000 per second. That's exactly what the carbonic anhydrase is doing. We see at the low end of the level that lysozyme is catalyzing about a reaction every two seconds but even that is pretty remarkable when we consider what all is happening in the catalytic process. 01:40 Well one of the questions people have is how can an enzyme do something that's so different from what a chemical catalyst does? And there are a variety of ways that people have tried to explain this. The most popular one that was originally taught and in fact still was being taught in many places, is that of the Fischer lock and key. The Fischer lock and key is very good at explaining how enzymes bind to substrate. It says that enzymes have a binding site that resembles the substrate, and the substrate binds to it. And that's pretty much as far as the Fischer lock and key model is concerned how it goes. Now the Fischer lock and key model is very good at explaining the binding process, but it's not very good at explaining the catalytic process. How does it happen? Well a more recent model, a more modern model or a modern perspective of this is the Koshland induced fit. The Koshland induced fit says that an enzyme has a site that the substrate can bind to, but it is only sort of like that substrate and you can see in the illustration on the right that the binding site of the substrate for the enzyme is not identical to the shape of the substrate. However, as the substrate comes into the binding site of the enzyme, the enzyme changes shape and it accommodates the substrate as you can see is happening in the slide moving to the bottom. This accommodating the substrate means that not only is the enzyme going to change the substrate, but the substrate is also transiently changing the enzyme. 03:07 Well why is that important? The reason that's important is because the enzyme's changing shape to accommodate the substrate, means that within the enzyme, there's actually some stresses or distortions that are actually happening to make this all process occur. This stress in the enzyme is then communicated back to the substrate, causing either mechanical or electronic or other kinds of stresses that cause the reaction to occur. As a result of these changes, the enzyme can catalyze a reaction, the product can be released and the enzyme go back to its original state. 03:42 Now Iâ€™d like to illustrate that in another way with a binding of the substrate as we can see here. 03:48 In this illustration we start at the top, with the enzyme shown in green and this enzyme has two substrates. We can see the two substrates as shown here, a molecule on the left, and a molecule on the right. They start out with the enzyme in a pretty much a wide open state, very much like my hand. In the bound state, the enzyme you can see has changed shape, much like if you put something into my hand, my fingers would clasp it, and that's exactly what has happened here. Well just like if you had put something in my hand and my fingers clasped it, I would bring those items closer together and squeeze them together in a way that was different than the way that they existed originally. The squeezing them together is what's causing the reaction, so the stress of binding the substrate has now produced a circumstance where the enzyme is making the reaction actually happen. When the reaction happens of course, we have molecules that start out as A and B, but they're now leaving as C and D because they've reacted. And when they're C and D, they no longer bind in the same way they did as A and B. What happens then? The enzyme lets go, and that's what happens below. So we see that the enzyme is actually changing its shape as a part of the catalytic process and this is a very magical part of enzymes, as it were.

The lecture Catalysis – Protein Functions by Kevin Ahern, PhD is from the course Biochemistry: Basics.

Which of the following statements about enzymatic catalysis is NOT true?

Which of the following enzymes, in the human body, act at the fastest rate?

What is the turnover number of an enzyme?

i like this lecture. way of representing and explaining is quiet good.

i like this lecture. way of representing and explaining is quiet good.