Tetracyclines
Tetracyclines are a class of broad-spectrum antibiotics indicated for a wide variety of bacterial infections. These medications bind the 30S ribosomal subunit to inhibit protein synthesis of bacteria. Tetracyclines cover gram-positive and gram-negative organisms, as well as atypical bacteria such as chlamydia, mycoplasma, spirochetes, and even protozoa. The oral absorption of tetracyclines is decreased with the ingestion of some medications and supplements (e.g., milk of magnesia) or food (e.g., dairy products) that contain polyvalent cations, such as calcium and magnesium. Adverse effects include photosensitivity, GI upset, and skin pigmentation in the case of minocycline. Tetracyclines suppress bone growth and discolor teeth in children and are contraindicated in pregnancy and breastfeeding. Of importance, 3 new tetracyclines were approved by the FDA in 2018, which may have a role in treating certain infections due to drug-resistant organisms.
read more 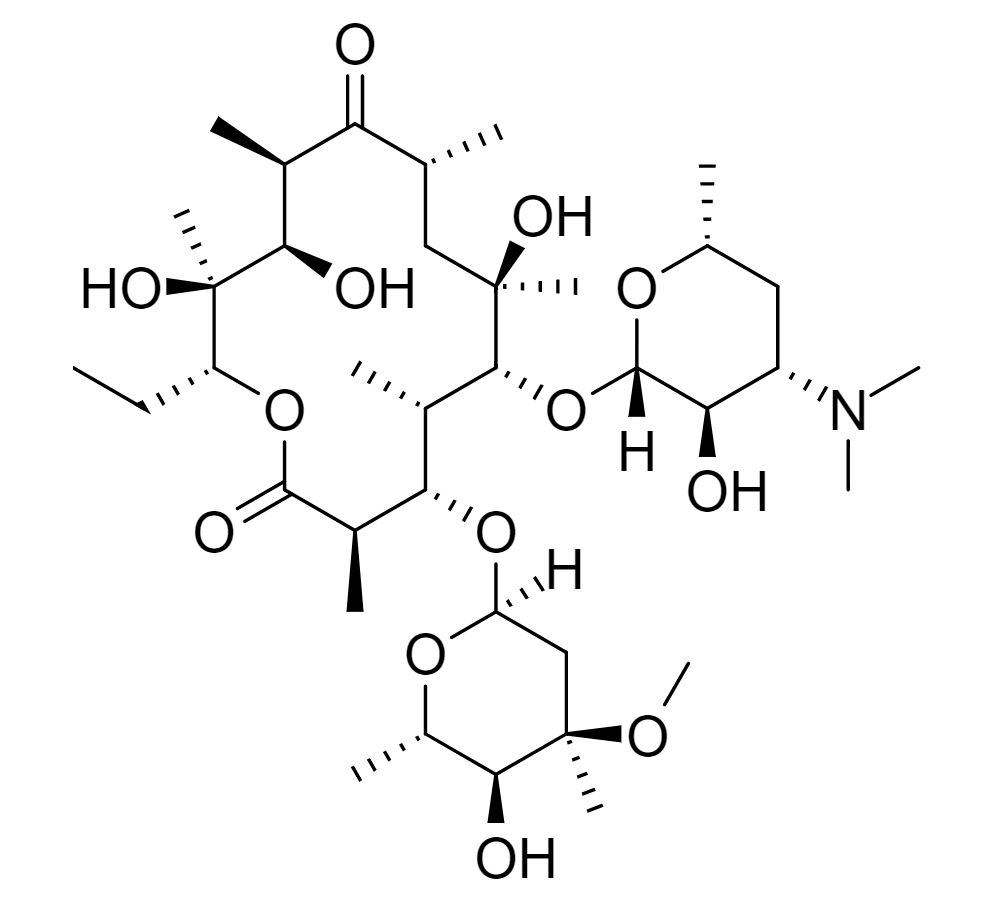 Macrolides and Ketolides
Macrolides and ketolides are antibiotics that inhibit bacterial protein synthesis by binding to the 50S ribosomal subunit and blocking transpeptidation. These antibiotics have a broad spectrum of antimicrobial activity but are best known for their coverage of atypical microorganisms. Common macrolides are erythromycin, clarithromycin, and azithromycin. Side effects include GI upset, QT prolongation, and hepatotoxicity. Resistance mechanisms include ribosomal methylation or mutation, inactivation of the drug through enzyme production, or removal of the drug through efflux pumps.
read more 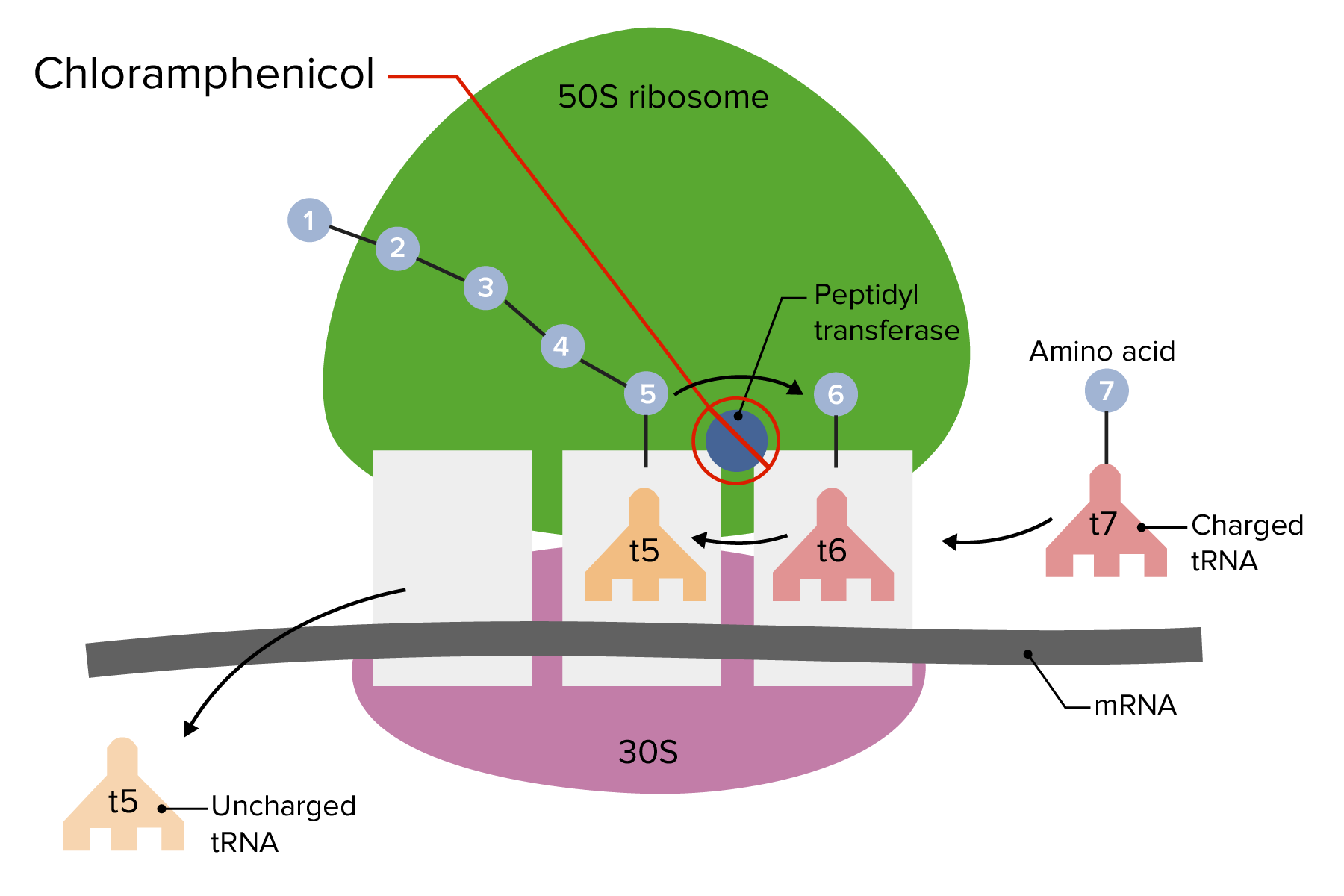 Chloramphenicol
Chloramphenicol, the only clinically relevant drug in the amphenicol class, is a potent inhibitor of bacterial protein synthesis by binding to the 50S ribosomal subunit and preventing peptide bond formation. Chloramphenicol is a broad-spectrum antibiotic with wide distribution; however, due to its toxicity, its use is limited to severe infections where another alternative antibiotic is not available (usually due to resistance issues). Adverse effects include optic neuritis, aplastic anemia, and gray baby syndrome.
read more
Load more
Share
Ask Questions
Take Notes
Download Slides
Report Mistake
Comments
show all Show less
My Notes
show all Show less
Learning Material 2
show all Show less
Report mistake
Transcript
0 of 0

00:00 Let's move on to another category of antibacterial agents, the Bacterial Protein Synthesis Inhibitors. 00:08 So the bacterial protein synthesis inhibitors are narrow spectrum agents. 00:15 They act either on the 50S subunit such as linezolid or streptogramins or lincosamines. 00:22 Or the broad spectrum agents that are like the macrolides. 00:26 and chloramphenicol. 00:28 Other broad spectrum agents that act on the 30S subunit include the tetracyclines, the aminoglycosides. 00:36 Now let's just quickly do some definitions. 00:40 Because we need to do this before we go on. 00:42 There's something called as post-antibiotic effect. 00:45 So this is an anti-ineffective effect that lasts after the elimination of the antibiotic from the body. 00:50 That's often because we have some kind of, I wouldn't say permanent but long lasting effect in this case on the 50 or 30S subunits. 00:59 Bactericidal means that it kills bacteria. 01:03 Bacteriostatic means that it just stops the bacteria from replicating but doesn't kill them. 01:09 So the bacteria are still alive but the numbers aren't increasing. 01:13 So the other immune mediated, killing of the bacteria can occur unimpeded. 01:19 The 70S ribosomal mRNA subunit is composed of a 50S and a 30S. 01:28 Okay, I know 50 plus 30 is 80. 01:32 And how come 50 plus 30 equal 70. 01:34 Don't worry about it, the point is that the 50S and the 30S make up 70S unit. 01:40 Time dependent agents. 01:43 So these are drugs that have increased killing activity with time. 01:48 This is different from the concentration dependent killing where the drugs have increased killing activity with concentration. 01:55 So there you have some basic definitions and we're going to be using them as we go forward in this lecture. 02:03 Let's go on to the 70S ribosomal unit. 02:10 The 70S ribosomal unit is made up of 50S and the 30S units. 02:15 Now, this is a hamburger. 02:17 Think of it is as a hamburger bun. 02:19 So 50S is top of the bun and the 30S is the bottom of the bun. 02:22 So the 30S is smaller and flatter. 02:24 The 50S is bigger and puffier. 02:26 Now how this works is that you have this charged transfer tRNA on the end there. 02:33 Bringing in the 7th amino acid. 02:36 You can see the 7 in there, that's the amino acid. 02:38 So the charged transferRNA and sits on top of the mRNA, or messengerRNA. 02:44 And the messengerRNA is the base that determines what the coding is going to be for the protein. 02:51 Let's pretend for a moment that this particular protein is, or I don't know a protein involved in metabolism. 02:57 There's a specific code that's coded by mRNA. 03:00 And it tells the transferRNA which amino acids to bring in. 03:05 As it goes through the hamburger, it's as if you had a slice of cheese through the hamburger buns, you get different coding. 03:13 And you have a very specific sequence that makes up the protein. 03:18 So the protein is the sort of the chain of blue circles there. 03:22 Kind of like a string onion coming out of the hamburger. 03:25 So that protein is very specifically configured based on the characteristics of the messengerRNA. 03:32 Now the unchanged, sorry uncharged transferRNA is then discarded and eventually becomes charged and then it grabs another amino acid. 03:43 Now, the drugs we're going to talk about act at different points in this 70S ribosomal unit. 03:50 So for example, chloramphenicol blocks the transpeptidation which is the joining of the two amino acids. 03:57 The macrolides also block transpeptidation but in a slightly different area. 04:03 The tetracyclines binds to 30S subunit and prevent binding of incoming transferRNA. 04:10 So they actually stop, you know transferRNA number 7 from joining. 04:15 Linezolid has a unique site that inhibits initiation complex formation. 04:21 So initiation complex is the very first reaction that brings the 30S and the 50S together. 04:27 And allows everything to start working. 04:29 On the other end of the production line there, the streptogramins block exit ports for polypeptides. 04:36 So new ones can't come in and overall translation is inhibited.

What statement about narrow-spectrum bacterial protein synthesis inhibitors is CORRECT?

Which class of bacterial protein synthesis inhibitors works by preventing the binding of incoming tRNA?

What best defines the term bacteriostatic?

Best class in protein synthesis inhibitors I have ever watched. Thank you!

Very nice lectures! Focuses on the need-to-know things that have clinical relevance.

Best class in protein synthesis inhibitors I have ever watched. Thank you!

Very nice lectures! Focuses on the need-to-know things that have clinical relevance.