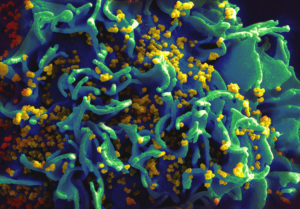 00:01 As we get older, things begin to go wrong, and the immune system is no exception to this. 00:05 Immunosenescence particularly affects T-cells. 00:10 The thymus shrinks by about 3% each year following puberty. 00:17 And therefore, there is a reduced production of naïve T-cells. 00:22 In infancy, the thymus produces T-cells with a mixture of different specificities. 00:28 The T-cell numbers in the peripheral pool are maintained by replication of circulating cells. 00:35 In early adult life, the thymus produces fewer T-cells. 00:42 Proliferation in the periphery maintains the size of the T-cell pool. 00:48 Replicative senescence related to the shortening of telomeres limits the number of times a cell can divide. 00:55 Cytomegalovirus-specific T-cells become dominant at the expense of other specificities during aging. 01:02 And the response to vaccines and to infection declines. 01:08 So in the elderly, nearly no new T-cells are produced by the thymus. 01:14 And this replicative senescence makes it harder for proliferation in the periphery to maintain T-cell numbers. 01:23 In addition, the T-cell pool has become very oligoclonal. 01:28 That means there are very few different clones of T-cells. 01:31 Their specificity becomes more limited as we age. 01:35 In fact as we age, neutrophils have a lower ability to produce reactive oxygen species, they have a lower ability to be chemotactically attracted to the site of the infection, and they have a reduced ability to phagocytose microorganisms. Dendritic cells have a reduced ability to co-stimulate for T-cell activation. 02:00 Macrophages again like neutrophils, have a reduced ability to produce reactive oxygen species, also to produce reactive nitrogen intermediates, the amount of IL-6 they can produce goes down, and the amount of prostaglandin E2, a pro-inflammatory substance goes up. 02:21 Natural killer cells have reduced cytokine production and a decreased ability to kill infected cells, in other words reduced cytotoxicity. 02:31 Antibody levels overall do not decline, but there is a reduced affinity of the antibodies produced, and also there are greater numbers of autoantibodies against self antigens that are produced. 02:44 Infection can be an important cause of secondary immunodeficiency. 02:54 So to just give you a few examples; Example of a parasite- malaria, a protozoan parasite. 03:01 In malaria, hemozoin which is produced from host hemoglobin upon infection with the Plasmodium species that causes malaria, this substance inhibits dendritic cell function. 03:17 An example of a virus - the measles virus. 03:20 Infection of dendritic cells leads to reduced T-cell responsiveness. 03:27 Example amongst the bacteria - Staphylococcus. 03:31 The toxic shock syndrome that you see in Staphylococcal infections is caused by a superantigen that leads to T-cell exhaustion. 03:41 A superantigen is a molecule that stimulates lots and lots and lots of different T-cell clones, not just the ones specific for the antigen, but many others as well. 03:52 And then finally of course, the Human Immunodeficiency Virus that leads to the Acquired Immune Deficiency Syndrome (AIDS).

Which of the following is associated with immunosenescence?

Approxiamtely how fast does the thymic epithelium shrink during adulthood?

Infection with which of the following pathogens may cause hemozoin?