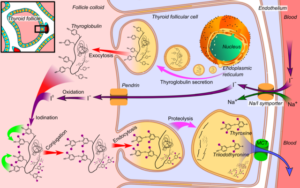 Precursor of Thyroid Hormones
Tyrosine is one of the amino acids that play a big role in a number of physiological processes. They are precursors for some hormones and neurotransmitters needed by the body for metabolic functions. In this article, the chemistry of tyrosine will be discussed. The article will answer how it is metabolized to produce the different hormones and neurotransmitters.
read more
Load more
Share
Ask Questions
Take Notes
Download Slides
Report Mistake
Comments
show all Show less
My Notes
show all Show less
Learning Material 2
show all Show less
Report mistake
Transcript
0 of 0

The lecture Tyrosine: Precursor of Thyroid Hormones by Kevin Ahern, PhD is from the course Amino Acid Metabolism. It contains the following chapters:

Which of the following is true regarding thyroid hormones?

Which of the following is true regarding thyroid hormone metabolism?

Which of the following is true regarding tyrosine catabolism dysfunction?

Which amino acid is the main precursor for thyroid hormones?

Which enzyme converts thyroxine into triiodothyronine?

Which of the following statements is not true?

Which of the following is not correctly associated?