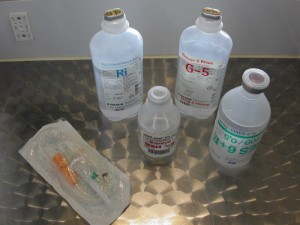 Types of Intravenous Fluids
Intravenous fluids are most commonly administered in acute and severe hypovolemic conditions. In the therapeutics, two classes of i.v. fluids are most commonly utilized: crystalloids and colloids; both have their own advantages and disadvantages. The effect of various clinical conditions on the volume of ICF and ECG can be best studied by Darrow-Yannet diagrams.
read more
Load more
Share
Ask Questions
Take Notes
Download Slides
Report Mistake
Comments
show all Show less
My Notes
show all Show less
Learning Material 2
show all Show less
Report mistake
Transcript
0 of 0

00:01 IV fluids, the first classification that we'll be dealing with will be called crystalloids. 00:09 And the reason that I paused here for crystal is because I want you to think of these electrolytes are being crystal and the reason I say that is all go ahead and introduce the second category that we'll discuss next and those would be colloids. And often times as soon as you get crystalloids and colloids confused, and there is really no need for that. Here the crystalloids, the crystals would be the electrolytes and we primarily are dealing with sodium and chloride as you can imagine. Now, these do not readily cross the plasma membrane and this is something that we have already discussed in reference to sodium chloride. For example, once again organization, you have ECF and ICF. The membrane that separates the ECF and ICF would then be your plasma or cell membrane and you know that electrolytes such as sodium and company do not cross it. Well potassium will, but that obviously is not brought into the discussion here whereas the membrane that separates the ECF, amongst ECF meaning to say the plasma compartment and also the interstitium is then separated by a capillary membrane and then here, of course, your sodium and chloride would readily cross. Hope that is clear. That is an organisation pattern that we have established now throughout the lecture series. Now when dealing with crystalloids, the .... have getting this fluid into the plasma or into the interstitium, overall what have you done? You have introduced the fluids into the ECF. 01:52 Now with that said, obviously the compartments that you want to replenish if need be when a patient has undergone hypovolemic changes or hypovolemic type of conditions, would be in fact the plasma compartment. But understand because of its cost effectiveness that saline which is a crystalloid including sodium chloride would be the easiest access point. As you said now, there is going to be a little bit of math involved here and it is important that you at least understand this much. I am going to give you the most complicated situation that you might then encounter here in your medical education. Obviously, when you go further into specialization there's going to be a lot more detail required of you, but let us just keep things at this point at the level where there is just enough where you can be successful as you walk into any ward and take any board. The crystalloid is distributed equally through the ECF. In the ECF, now the values that you want to use here technically would be 1/4 and we have talked about this plenty. One-fourth would be the plasma and then 3/4 of this would then be the interstitium. But overall we are only remaining where? Good. In the ECF. Examples, normal saline and lactate ringer or ringers lactate. Some of these crystalloid is all we're doing here. We haven't gone into albumin because that is a different category, right. So all we are doing here is looking at crystalloids thus we have normal saline and ringers lactate. So if you have a question, why isn't fresh frozen plasma here? That is because well we haven't gotten into colloids, which is our next discussion.

The lecture Types of IV Fluids (Intravenous Fluids): Crystalloids by Carlo Raj, MD is from the course Fluid and Electrolyte Balance.

Which of the following is considered a crystalloid?

Which of the following statements about crystalloid fluids is INCORRECT?

Which of the following statements about the differences between crystalloids and colloid fluids is CORRECT?

Which of the following properties is characteristic of crystalloids?

Which of the following is a crystalloid solution?