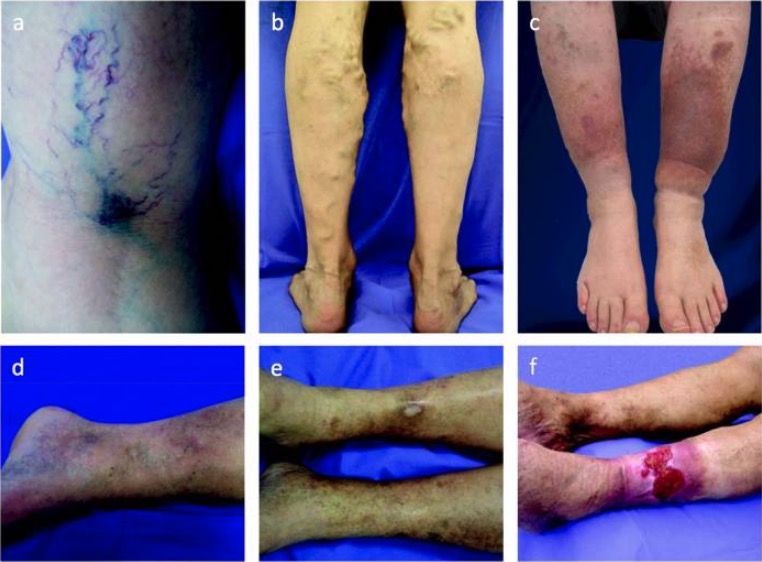 Chronic Venous Insufficiency
Chronic venous disease is a spectrum of disorders characterized by venous dilation and/or abnormal vein function in the lower extremities resulting from venous hypertension. "Chronic venous insufficiency" refers to the more severe forms of chronic venous disease. Skin changes typically distinguish chronic venous insufficiency from milder forms of venous disease (like varicose veins) and include skin pigmentation, stasis dermatitis, lipodermatosclerosis, and eventually, the development of ulcers. Diagnosis is usually based on physical exam findings alone, although venous duplex ultrasonography can provide additional information about the etiology, location, and extent of disease. The mainstay of management is compression therapy. A variety of surgical options also exist, including ablation, sclerotherapy, and valve repair. Venous ulcers are common as the disease progresses and are often very difficult to treat.
read more

Deep Vein Thrombosis
Deep vein thrombosis (DVT) usually occurs in the deep veins of the lower extremities. The affected veins include the femoral, popliteal, iliofemoral, and pelvic veins. Proximal DVT is more likely to cause a pulmonary embolism (PE) and is generally considered more serious. Ultrasound can visualize the thrombus and anticoagulation is the primary mode of treatment; the main objective is the prevention of development of a PE.
read more
Load more
Share
Ask Questions
Take Notes
Download Slides
Report Mistake
Comments
show all Show less
My Notes
show all Show less
Learning Material 2
show all Show less
Report mistake
Transcript
0 of 0

00:00 Let’s just review the venous-side events that relate to thrombosis once more. 00:06 Deep venous thrombosis is due to a thrombus – a blood clot – that forms within a deep vein. We can also have superficial venous thrombosis but that’s usually just a transient irritation and not as serious as the deep venous thrombosis. 00:25 Deep venous thrombosis often involves a substantial amount of clot so that, when it embolizes, it causes significant obstruction in the lung circulation. 00:36 The source of these emboli in the legs – we’re going to talk about some more subsequently in this talk – but it usually starts in the veins of the calf and then extends up into the veins of the thigh. 00:50 When the blood clot breaks off and travels to the lung as pulmonary embolism, if it blocks a major artery of the lung, that can cause immediate shock or decreased blood pressure in the patient. 01:07 But often these clots are small. They get out into the periphery and it’s only with repeated episodes of embolisation of clot to the lung that significant obstruction of the pulmonary circuit occurs. 01:20 The condition with deep venous thrombosis plus pulmonary embolism is often called venous thromboembolism or VTE. And it’s obstruction in the vein caused by a thrombus. But then pieces break free and are carried away with the blood flow into the lung. And if there’s enough of the pulmonary circulation that’s obstructed, as I said the patient can develop very serious illness including shock and this can be fatal. 01:50 Just to compare a little bit about what happens with thrombosis in the arterial and the venous system: Deep venous thrombosis can be asymptomatic. It can resolve without any problems but, when a blood clot breaks off and travels to the lung as pulmonary embolism then, as I’ve said, the patient can have a very serious illness. 02:14 On the arterial side, the major problems relating to thrombosis are either myocardial infarction or unstable angina. 02:21 With myocardial infarction, the thrombosis completely occludes the artery and cuts off blood flow beyond. 02:27 With unstable angina, often the atherosclerotic plaque plus some overlying thrombus doesn’t completely occlude the artery so the patient has chest pain at rest that comes and goes or pain that’s easily provoked when they do the most minimal exertion. 02:44 Again just to show you the difference between what happens when there’s a clot on the venous side versus a clot on the arterial side. 02:53 Venous side: DVT, pulmonary embolism, arterial-side myocardial infarction, unstable angina. 03:02 Now it turns out that, as in hypertension, DVT is often silent. And even pulmonary embolism can be silent. In fact, as you can see from this pyramid, the vast majority of patients have silent DVT or silent PE. And often it resolves without any therapy. 03:23 In a smaller percentage of patients, the DVT and the pulmonary embolism can be symptomatic. 03:29 And in a very small amount, it’s fatal. 03:32 So of course what we would like to do is identify the DVT or the PE when it’s silent and when the amount of pulmonary embolism has been very small so that we can prevent progression up the pyramid to the point where the obstruction causes symptoms or even is potentially fatal. 03:53 I mentioned before, where does deep venous thrombosis commonly develop? It commonly develops in the popliteal or superficial femoral veins – that is just below the knee and just above the knee. And that clot there, particularly the ones in the popliteal veins, can be quite small and may never embolize or, if they embolize, they may not cause much trouble. But as the clot develops – and what happens is it can of course continue to build – it may extend up into the common femoral vein and even into the iliac vein. 04:34 At that point, we’re dealing with a large volume of blood clot. If that large amount of clot breaks off and goes to the lung, we could see either fatal pulmonary embolism or shock. 04:49 You’ll notice that only a small percentage of clots are found in the popliteal vein alone, more in the superficial femoral vein. 42% in popliteal vein, both veins. Again only a small percentage in the common femoral but a substantial number get into the iliac and inferior vena cava – 35%. And those are the most dangerous ones. 05:12 We would like to discover the clots when they’re just down in the popliteal vein or in the superficial femoral, not when they develop in large volume up in the inferior vena cava or the iliac vein where, if they embolise, could be fatal.

The lecture Thrombosis: Examples by Joseph Alpert, MD is from the course Venous Diseases.

Which of the following is CORRECT about deep venous thrombosis?

Which of the following is TRUE about pulmonary embolism?