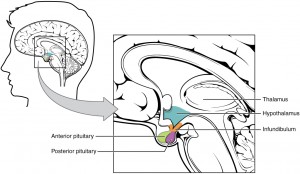 The lecture The Endocrine System – Biological Bases of Behavior (PSY, BIO) by Tarry Ahuja, PhD is from the course Individual Influences on Behavior. It contains the following chapters:

Which of the following lack(s) a physiological endocrine function?

A 5-year-old girl is diagnosed with rickets. Calcium levels were tested as part of the lab workup. Which of the following is the primary structure responsible for calcium homeostasis?

Which of the following produce(s) the hormone responsible for the fight-or-flight response?

What class of hormones acts by regulating DNA transcription?

Which class of hormones includes hormones produced by the adrenal medulla?