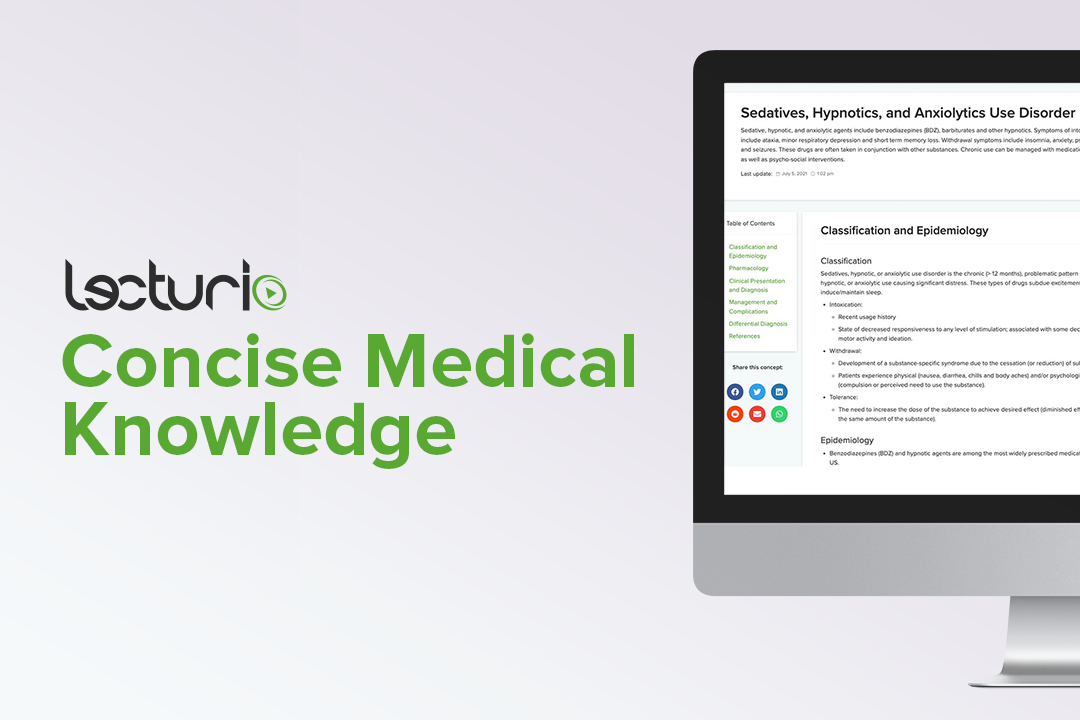 Sedatives, Hypnotics, and Anxiolytics Use Disorder
Sedative, hypnotic, and anxiolytic agents include benzodiazepines (BZDs), barbiturates, and other hypnotics. Symptoms of intoxication include ataxia, minor respiratory depression, and short-term memory loss. Withdrawal symptoms include insomnia, anxiety, psychosis, and seizures. These drugs are often taken in conjunction with other substances. Chronic use can be managed with medication taper as well as psychosocial interventions.
read more

00:01 Hi, welcome to the pharmacology course by Lecturio. This lecture and this course is about toxicology and we're going to cover some of the drugs of abuse that are common in our culture. 00:13 The first group of drugs that we'll talk about are the sedative hypnotics. 00:17 This includes the benzodiazepine, the barbiturates and the ethanol. 00:22 With respect to benzodiazepines, they often end in -lam or -pam. 00:27 So, rhohypnol is probably the most commonly abused of these drugs. It is no longer used in clinical practice. 00:36 It is often referred to as the date rape drug. It's also called a "roofie". 00:41 Chloral hydrate is a very old benzodiazepine that we sometimes use in senior citizens, but it is often abused in clinical practice. It's known as "sparkle" or "floral chloral" or "flower", which is a play on words of the name itself. 00:59 GHB, are also called "roofies", but they are called "roofies" incorrectly because they are different from rhohypnol. 01:07 GHB is often used as a club drug. You get euphoria, enhanced sensory perception and amnesia and it is also sometimes used in date rape. The other benzodiazepines are more clinically used and I've listed them here so that you can have them for reference. 01:26 In terms of how they affect the human body, they are used predominantly for anti-anxiety, and there's antidepressants as well. They may follow the dopaminergic method of addiction. 01:37 And benzos are often used with alcohol in the "date rape" phenomenon. 01:42 Depressant effects are potentiated by marijuana, opioids and antipsychotics. 01:46 And in terms of the symptoms, they are similar to ethanol with a rapid pulse and dilated pupils. 01:53 The antidote to all benzos is flumazenil. And it's often kept in code cards and it's often kept in addiction centers. 02:03 Withdrawal treatment is usually switching them to a longer acting benzodiazepine, and this gives them reduced seizure activity and it gives us an ability to gradually reduce the dose with a minimum side effects. 02:17 Diazepam is probably one of the most commonly used long acting agent to get people off of these short acting benzos. 02:25 Sometimes we give a beta blocker too. So, propranolol is sometimes used to reduce the sympathetic activity associated with benzo withdrawal. 02:34 Therapeutic withdrawal symptoms include weight loss, paresthesia and headaches and these also are treated with commonly over the counter pain medications and headache medications. 02:48 Barbiturates are generally thought of as more potent and more dangerous than benzodiazepines. 02:53 The short acting barbiturates like secobarbital are very very addictive. 02:59 In medical practice, it's replaced by benzodiazepines in terms of treating anxiety, but we still sometimes use barbiturates in anticonvulsant therapy. 03:08 And it's often used in euthanasia and in illegal interrogation. 03:12 Now, what's concerning about secobarbital is that it is very commonly abused by physicians and nurses. 03:19 So, if you start to see this kind of behaviour in a healthcare practitioner, start thinking about secobarbital. 03:26 Withdrawal treatment. Use a long acting benzodiazepine to reduce seizure activity and give a gradual reduction of dose. 03:34 So, the treatment is going to be exactly the same as benzo overdoses. 03:38 So, diazepam, also called valium, is a long benzo and I mentioned that to you before. 03:43 Once again, we'll use propranolol to reduce the sympathetic activity of withdrawal. 03:49 Now, one of the things that we have to be very aware of and we've talked about this in our pharmacology pharmacokinetics course is that it may induce CYP2C9. So, co-administration with codeine can actually have lethal effects of the codeine when patients also take barbiturates.

The lecture Sedative/Hypnotic Drugs: Benzodiazepines, Barbiturates and Ethanol – Drugs of Abuse by Pravin Shukle, MD is from the course Toxicology. It contains the following chapters:

Which of the following is generally used to reverse the effects of benzodiazepine overdose?

Which of the following is the most appropriate medication for the treatment of benzodiazepine withdrawal?