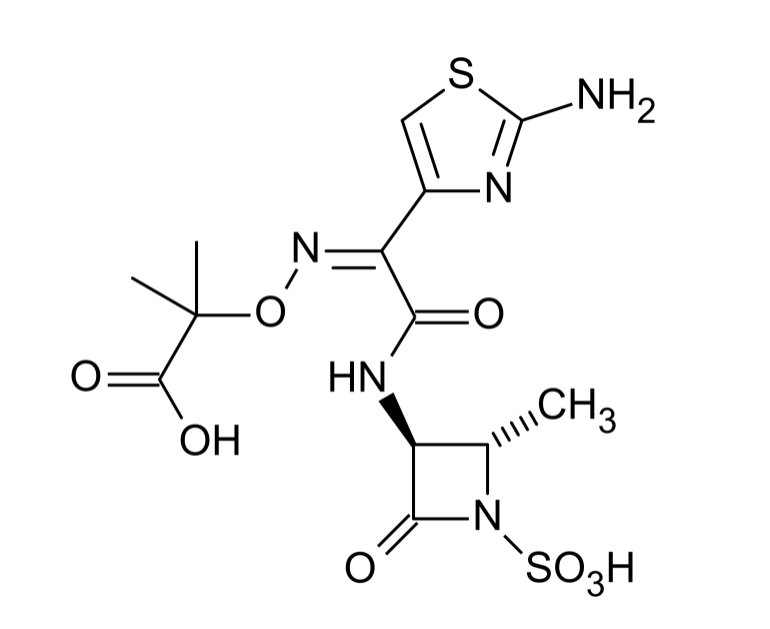 Carbapenems and Aztreonam
The carbapenems and aztreonam are both members of the bactericidal beta-lactam family of antibiotics (similar to penicillins). They work by preventing bacteria from producing their cell wall, ultimately leading to bacterial cell death. There are 4 available carbapenems, all ending in “-penem,” and 1 available monobactam, which is aztreonam. The carbapenems are all broad-spectrum antibiotics used for a variety of serious, often MDR and/or hospital-acquired infections (HAIs) that can occur throughout the body. Aztreonam has a narrower spectrum and is typically used for aerobic gram-negative bacilli infections in patients who have a serious beta-lactam allergy but require beta-lactam therapy, as there is no significant cross-allergenicity between aztreonam and the other beta-lactams.
read more
Load more
Share
Ask Questions
Take Notes
Download Slides
Report Mistake
Comments
show all Show less
My Notes
show all Show less
Learning Material 2
show all Show less
Report mistake
Transcript
0 of 0

00:01 Okay, so we've talked about the penicillins. 00:03 We've talked about the cephalosporins let's move on to the penems. 00:08 When you talk to your professors sometimes, they'll refer to penems as carbapenems but that's not quite technically correct. 00:15 Penems include both of the sulfapenems and the carbapenems. 00:19 The first of the sulfapenems is faropenem. 00:22 Faropenem is an orally active unsaturated beta-lactam antibiotic. 00:29 It's resistant to many different forms of extended spectrum beta-lactamases, so when we have agents that are failing because the bacteria is producing beta-lactamase, we can use this agent and it tends to work quite nicely. It has better chemical stability than most agents and the nice thing about this particular agent is we now have trials that show that in tuberculosis it was effective. 00:55 We start treating patients in our community acquired pneumonia clinics with this agent and we're starting to see some people who have pulmonary TB being treated with faropenem. 01:07 The carbapenems are probably quite familiar to you already. 01:12 The most popular and most well-known of the carbapenems is imipenem. 01:17 You've probably seen it used on your clinical rotations. 01:20 When I was a resident this drug was just coming in and we used to nickname it guerillacilin because it was so powerful. 01:27 It's chemically unique but it still has a beta-lactam ring so we sometimes worry about beta-lactamases. 01:33 However, it does have a low susceptibility to those penicillinases so we can take some comfort in that. 01:40 Unfortunately, it is susceptible to a different kind of enzyme produced by the kidney called dehydropeptidase. 01:48 It's administered with cilastatin which is an inhibitor of that enzyme so we will see it administered as imipenem cilastatin. 01:57 It's a wide ranging agent. We tend to use it against all kinds of organism that includes the gram positive cocci, the gram-negative rods, the anaerobic confections are often treated including intra-abdominal infections, and then of course it's active against pseudomonas and the Acinetobacter species as well, so you can see where in patients who are in the intensive care unit, let's say they're brought in with pneumo sepsis and they have a bleeding gut, imipenem is often used in this kind of a patient because we're really not sure what is going on in the patient so we wanna broad-spectrum powerful agent that has pseudomonas activity.

What best describes the pharmacologic structure of sulfapenems?

What statement about carbapenems is INCORRECT?