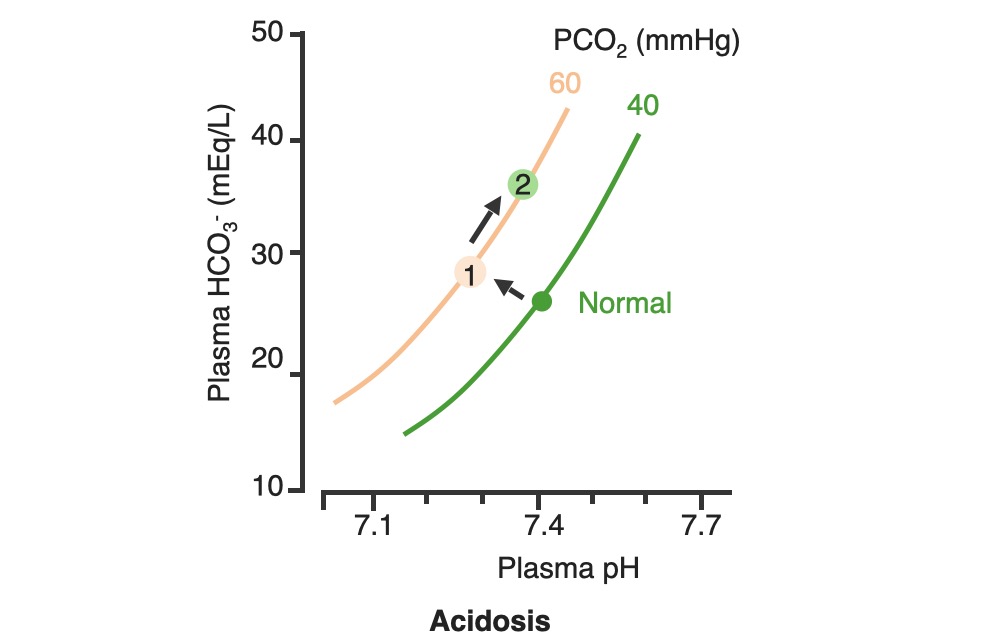 Respiratory Acidosis
The respiratory system is responsible for eliminating the volatile acid carbon dioxide (CO2), which is produced via aerobic metabolism. The body produces approximately 15,000 mmol of CO2 daily, which is the majority of daily acid production; the remainder of the daily acid load (only about 70 mmol of nonvolatile acids) is excreted through the kidneys. In the setting of hypoventilation, this acid load is not adequately blown off, and respiratory acidosis occurs. Renal compensation occurs after 3–5 days, as the kidneys attempt to increase the serum bicarbonate levels. Patients are often asymptomatic, or they may present with neuropsychiatric manifestations or mild dyspnea. Diagnosis is made with arterial blood gas measurement. Management involves treating the underlying etiology, stabilizing the patient, and avoiding respiratory sedatives.
read more 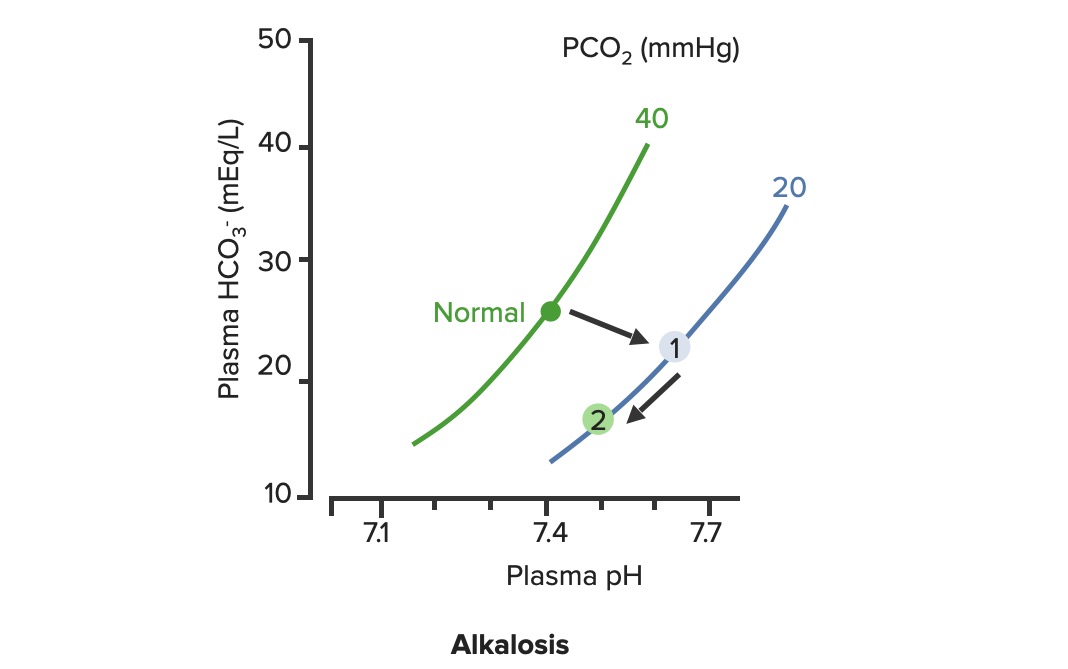 Respiratory Alkalosis
"The respiratory system is responsible for eliminating the volatile acid carbon dioxide (CO2), which is produced via aerobic metabolism. The body produces approximately 15,000 mmol of CO2 daily, which is the majority of daily acid production; the remainder of the daily acid load (only about 70 mmol of nonvolatile acids) is excreted through the kidneys. When hypoventilation occurs, excess carbon dioxide is blown off and respiratory alkalosis develops. The kidneys respond by decreasing serum bicarbonate (HCO3–) through increased HCO3– excretion or decreased excretion of H+. Patients present with an increased respiratory rate, dyspnea, light-headedness and potentially psychologic symptoms. Diagnosis involves a thorough history, an exam, and an arterial blood gas measurement. Management focuses on addressing the underlying abnormalities, stabilizing patients in acute distress, and potentially a small dose of short-acting benzodiazepines.  "
read more 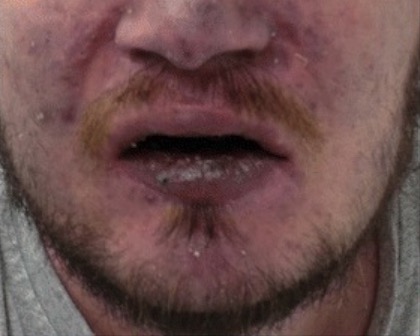 Respiratory Failure
Respiratory failure is a syndrome that develops when the respiratory system is unable to maintain oxygenation and/or ventilation. Respiratory failure may be acute or chronic and is classified as hypoxemic, hypercapnic, or a combination of the two. A number of etiologies exist, including diseases of the lungs, cardiovascular, and nervous system. Patients with respiratory failure may present with dyspnea, tachypnea, and altered mentation. The diagnosis is made with arterial blood gas and supplemented with laboratory and imaging studies to elicit an etiology. Management involves treating the underlying cause, supplemental oxygen administration, and mechanical ventilation for severe cases.
read more 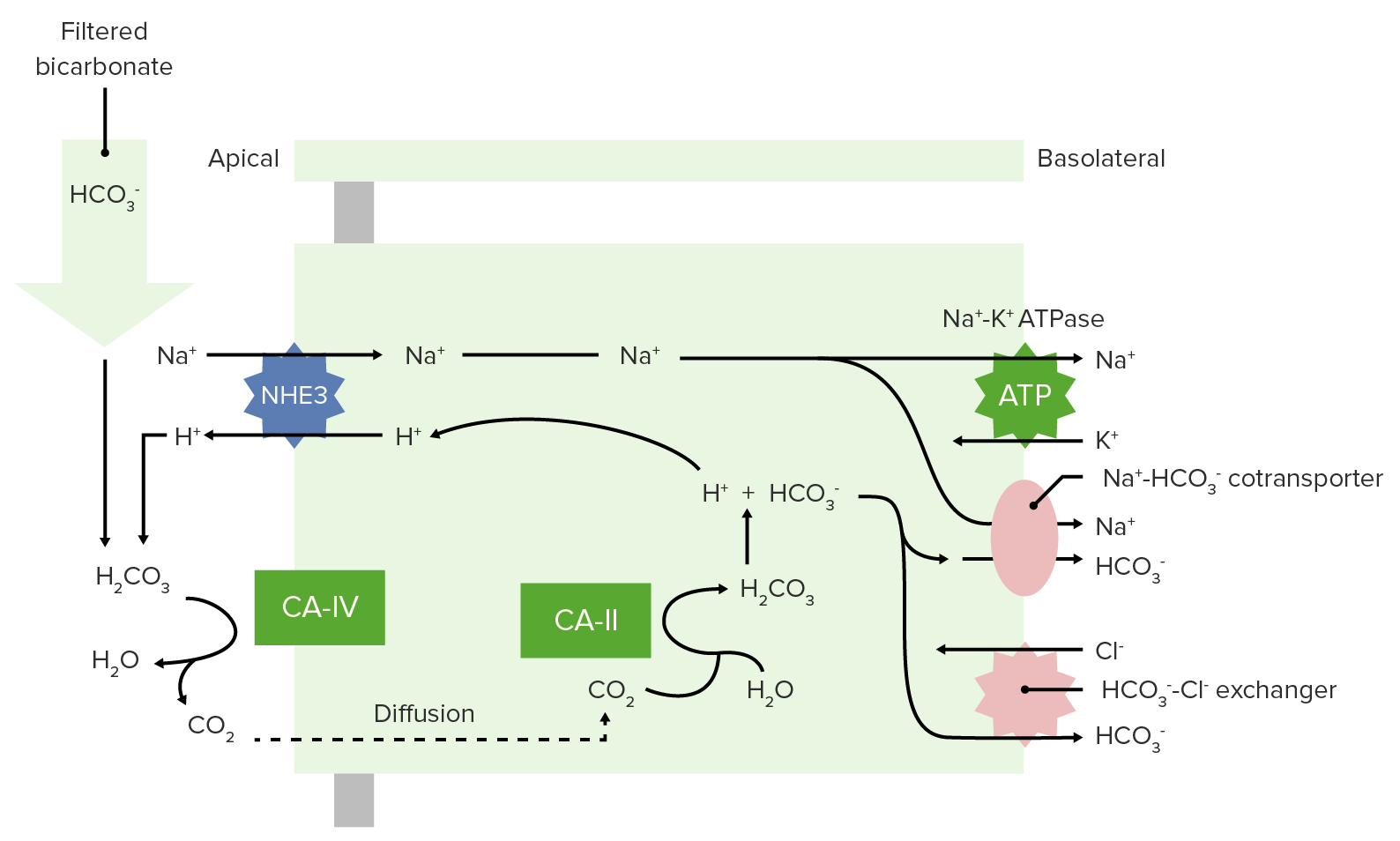 00:00 So, moving on now we're going to discuss a little bit about acid-base disorders and I'm coming to this really because of respiratory acidosis and type II respiratory failure. One of the major reasons why we do blood gases is not just to measure the PO2 and the PaCO2 but is actually to assess the acid-base balance of the patient. And if you have lung problems, there are two issues, you may have respiratory acidosis and that is a situation that occurs because when you underventilate the lung and you're not able to get rid of the carbon dioxide present in your blood, and that will lead to a low pH, a high PaCO2., and as it becomes compensated, as the body adjusts to the fact that it is unable to get rid of the carbon dioxide, then you will end up with the buffers that compensate the acidosis, increasing and we can see that in the blood gases by a high bicarbonate level and by positive base excess. The other respiratory problem that you get with acid-base balance is respiratory alkalosis, that is a problem of hyperventilation, you breathing fast, and that blows off your carbon dioxide and causes a respiratory alkalosis. 01:10 It is not a major problem, but it is one of the reasons why you will feel fainting if you breathe fast. And in fact, actually we often create a little bit of respiratory alkalosis in our patients when we're examining them because we ask them to take deep breaths when we're listening to their lungs. If they begin to feel dizzy, that's reflecting a little bit of respiratory alkalosis. I'm not going to discuss metabolic acidosis or metabolic alkalosis, I think the important one there is in fact the metabolic acidosis and we actually do see that in lung disease but that's a consequence of the severe lung disease causing hypoxia or if you have pneumonia, septic shock, and that leading to metabolic acidosis as the oxygen delivery to the muscles and peripheral tissues is impaired. 01:54 So, type II respiratory failure. We've mentioned type I, that's hypoxia with normal carbon dioxide, type II is respiratory failure associated with raised carbon dioxide. So it's defined as a high carbon dioxide, greater than 6, and, as I've just mentioned in the previous slide the higher the CO2, the more likely you are to have acidosis. Now that can be compensated. So for example, you may get somebody with an acute asthma attack, who is normally has got a normal PCO2, comes in to a hospital with a severe asthma attack, the CO2 is rising because they've almost got status ashtmaticus and may need ventilation. So they have a CO2 of 6, they will be quite acidotic because it's an acute event and compensation has not had time to occur. Now, in contrast, patients with COPD who may have a degree of type II respiratory failure chronically, they come into hospital, they can have a CO2 of 10, 12 even higher than that, and that pH may still be considerably higher than the patient presenting with acute asthma and a CO2 of only 7 and that's because of compensation. 03:08 And in that situation the COPD patients with a bicarbonate of 35, approaching 40 perhaps. 03:16 The big problem with type II respiratory failure is that oxygen can be dangerous and we see this repeatedly in patients presenting with COPD with an acute exacerbation, who have been given a high flow oxygen on the way into hospital. And that high flow oxygen unfortunately leads to an increase in the respiratory acidosis. The mechanism of that is that if you have type II respiratory failure, your ventilatory drive is actually taken over by the low oxygen level in your blood, so having a low oxygen keeps the ventilator drive going when you have type II respiratory failure. And if you give the patient too much oxygen and it comes up too high, you lose that ventilatory drive. The hypoxic drive for breathing is lost, and as a consequence you actually create a situation with a hypoventilation, the underventilation of the lungs, becomes more of a problem. As a consequence of that, the PCO2 will, PaCO2 will rise, and the pH will fall, and the respiratory acidosis will worsen. 04:24 So the underlying principle for the treatment of type II respiratory failure is to give them controlled oxygen supplementation, but aiming for a lower saturation than you would normally in somebody with type I respiratory failure. 04:37 A sort of safe PO2 of around 8 kPa where the risk of hypoxia causing a cardiac respiratory arrest is much lower than it would be, but still the POa2 is not in the normal range. And you do that by giving the patient a controlled oxygen. 04:56 Importantly if patients are receiving oxygen and they have type II respiratory failure, you need to monitor what's happening to the carbon dioxide level in the blood. 05:06 And to do that you have to repeat the blood gases and that will tell you whether the oxygen therapy is causing a rise in the CO2 and a fall in the pH and therefore it needs to be titrated downwards to a lower concentration of oxygen.

The lecture Patterns of Acid-base Disorders by Jeremy Brown, PhD is from the course Other Respiratory Disorders.

What is the cut off for PaCO2 usually seen in type 2 respiratory failure with hypoventilation?

Which of the following happens to the COPD patient when they are given high flow oxygen?

What is a possible end effect of giving high flow oxygen to the patient with type 2 respiratory failure?

Which of the following is the appropriate modality to provide respiratory support to a patient with type 2 respiratory failure?