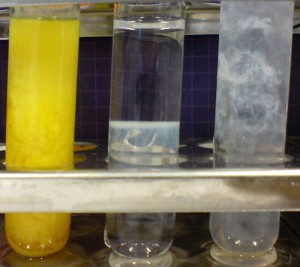 00:02 In the previous lecture, we were talking about acid and base chemistry, specifically we were talking about how you create acids, how you create bases and more specifically, the correlation between weak and strong and concentrated and dilute. 00:18 Now, what we’re going to be doing is carrying out revision exercise considering some of the more common ionic chemistry reactions, so the direct application of what you should have learnt in Module I. So. if we take neutralisation reactions as a starting point, it should come as no surprise that acids react with bases. And here we have an example of such. Sodium carbonate, Na2CO3 reacting in this case with hydrochloric acid to create a salt plus water plus carbon dioxide. Bear in mind, the driving force for this particular reaction is going to be the generation of water and also the carbon dioxide, in this case, which is a gas and obviously escapes. If we look at sulfites, it could also react with acids to form SO2 or sulphur dioxide gas, sodium sulfite, NaSO3, not to be confused with sulphate, which would be SO4, reacts with hydrochloric acid to, again, provide us with a salt plus water, in this case, a gas, sulphur dioxide. The reality is... is that the sulphur dioxide will actually partially dissolve in the water that you’ve generated and form an acidic solution of sulphurous acid. But, that’s beyond our terms of reference. 01:45 The neutralisation reaction for the first, the reaction of sodium carbonate with hydrochloric acid, can essentially be broken down into a number of different actual molecular events. 01:55 Note, you should be careful when using the term ‘molecule’ and ‘ions’ in the same sentence, since ions in their compounds are formed with the units and are never considered to be molecules. 02:07 However, as you can see, where we have hydrogen bound to carbon, bound to oxygen, there’s an element of molecular identity to these. So, let us start with the first step for this neutralisation reaction. The neutralisation reaction converts sodium carbonate in the presence of one equivalent of hydrochloric acid into sodium chloride, a salt and sodium hydrogen carbonate, NaHCO3. The complex ion -HCO3 or hydrogen carbonate has a formal charge of -1 whereas if you recall from Module I, Na exists in only two possible oxidation states, either 0 or +1. Hence, the reason why the stoichiometry there is 1 equivalent of Na+ to 1 equivalent of HCO3-. The NaHCO3 or sodium hydrogen carbonate then splits into Na+ and hydrogen carbonate in solution in and water, in this particular case. 03:15 This is broken down further into hydroxide and carbon dioxide and it’s the hydroxide OH- which then goes on to react with the second equivalent of hydrochloric acid resulting in the formation of water, which we know is an outcome of this reaction and another equivalent of sodium chloride. Hence, the reason why the equation, as given below, right at the bottom of the board is the fully-balanced equivalent of all of those events I’ve just discussed. Notice how on one side of the equation we have exactly the same components as we have on the other side. And that is absolutely essential when balancing those equations. Note also that remember what we said about the oxidation state in the previous module of certain atoms within the periodic table. 04:08 In group 1, they form +1 ions; in group 2, +2. 04:13 So, in this case, because sodium is in group one, it can only exist as Na+. That is why we need two Na+ in order to form a complete uncharged formula unit with the complex ion, carbonate or CO3(2-), which on itself carries a -2 charge. Thus, two times Na+, plus CO3, 2- results in a net charge of zero. Sulphides could also react with acids to form hydrogen sulphide gas, a rather smelly experiment in fairness since hydrogen sulphide really, really smells bad. Sodium sulphide, which is shown as the reactant in this equation reacts with two equivalents of HCl, hydrochloric acid. And knowing what I’ve just taught, being aware of what I’ve just discussed about the nature of sodium, you should be able to deduce that the oxidation state or the charge on the sulphur, in this case, must therefore be 2-. The driving force for this neutralisation reaction is the removal of ions from solution, to form either water or, in this case, hydrogen sulphide gas and is also results in the increase in entropy associated with the production of this gas.

The lecture Other Ionic Reactions: Introduction by Adam Le Gresley, PhD is from the course Ionic Chemistry.

Which of the following ions has an incorrect charge?

What is a neutralization reaction in chemistry?

Which of the following is NOT a balanced chemical reaction between an acid and a base?

Which of the following is NOT true regarding neutralization reactions?