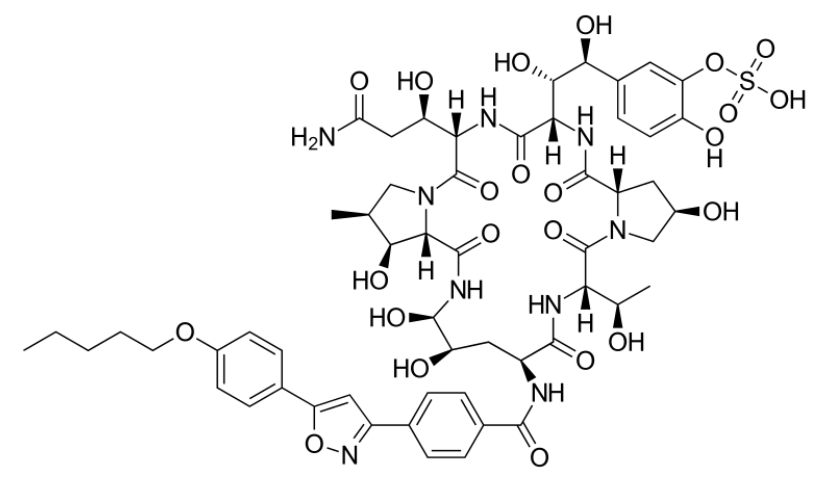 Echinocandins
Echinocandins are a group of fungicidal agents that target the fungal cell wall. Echinocandins inhibit β-glucan synthase, which in turn inhibits the production of β-glucan, a key structural component of fungal cell walls. The 3 primary drugs in this class include caspofungin, micafungin, and anidulafungin. Echinocandins are mainly used to treat Candida and Aspergillus infections in individuals who are critically ill or have neutropenia. Although echinocandins have a narrower spectrum of activity than some other antifungal classes, they are clinically useful because of their relatively low toxicity profiles and significantly fewer drug interactions than the azoles and amphotericin B. Resistance to echinocandins is generally uncommon, but is emerging in some strains of C. glabrata, usually through mutations that reduce the affinity of this drug to β-glucan synthase.
read more
Load more
Share
Ask Questions
Take Notes
Download Slides
Report Mistake
Comments
show all Show less
My Notes
show all Show less
Learning Material 2
show all Show less
Report mistake
Transcript
0 of 0

00:00 Let's move on to flucytosine. 00:03 Now flucytosine is a different class of medication. 00:07 It also an antimetabolite that's used in cancer chemotherapy. 00:11 It's eliminated in the urine. 00:13 So dose adjustments going to be necessary in patients who are, who have renal disease. 00:20 It is relatively narrow spectrum agent. 00:22 And it's used almost exclusively in cryptococcus neoformans infections. 00:28 The mechanism of action, it's actually included into the -- through the cell wall by a membrane permease. 00:39 And then that concentration inside the cell is actually increasing and accumulative. 00:44 It's converted by cytosine deaminase from flucytosine to 5-FU. 00:49 So 5-FU is 5 flourocytosine. 00:52 5-FU then blocks the production of thymidine through inhibiting thymidylate synthase. 00:59 So now you're starting to interfere with actual production of DNA fragments and RNA fragments. 01:06 When combined with amphotericin B or itraconazole, synergy occurs. 01:11 So you actually get a very strong combination effect with these two agents together. 01:16 In terms of toxicity there is a reversible bone marrow depression that you sometimes see, you can sometimes see alopecia as well. 01:26 So hair loss and of course liver dysfunction.

The lecture Flucytosine (5-Fluorocytosine/5-FC) – Antifungals by Pravin Shukle, MD is from the course Antimicrobial Pharmacology.

What toxicity is associated with flucytosine administration?

Which drug may be combined with flucytosine to create a synergistic antifungal effect?