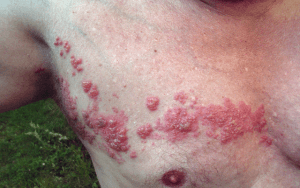 The lecture Neisseria Meningitidis (Meningococcus): Signs & Symptoms by John Fisher, MD is from the course CNS Infection—Infectious Diseases. It contains the following chapters:

What is the typical incubation period for Neisseria meningitidis?

A 19-year-old college student recently went hiking with his dormitory friends in the mountains of the southeastern part of America. He now presents to the emergency room with fever, malaise, and a full body non-blanching petechial rash. He is hypotensive and tachycardic. Lumbar puncture and blood cultures have been sent to the laboratory. Which of the following diseases are the most likely diagnoses to be considered?

What is the approximate case-fatality rate of meningococcus meningitis?

A 2-year-old child is brought to the emergency department for a one-day history of lethargy and poor feeding and episodes of vomiting. He had been tugging on his left ear for the past several days. He appears ill. On physical examination, he has a fever and is mildly tachycardic. Examination of the neck shows nuchal rigidity. Signs of otitis media are seen in the left ear. He does not have any rash. A lumbar puncture is obtained and appears abnormal on initial review. Which of the following organisms is most likely to be found in the cerebrospinal fluid?

A 72-year-old man is brought in from the nursing home for increased lethargy and altered mental status from his baseline. Caretakers note that he has not had any fevers, but hasn't been eating well and appears to be moving more slowly than usual and avoiding turning his head. He does not have any rash. Lumbar puncture confirms meningitis. Which of his symptoms is most predictive of mortality from this illness?

A previously healthy young adult is brought to the emergency department with confusion and a wide based gait after flu-like symptoms one week ago. An MRI shows abnormalities of the cerebellum. Spinal fluid shows pleocytosis. Which of the following conditions and etiologies are most likely?

Clinical anecdotes are a great supplement to an already helpful lecture

His anecdotes are amazing here. Makes the subject much more memorable.

Clinical anecdotes are a great supplement to an already helpful lecture

His anecdotes are amazing here. Makes the subject much more memorable.