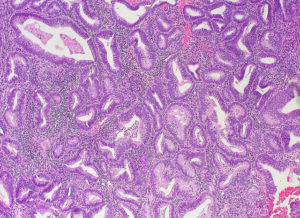 Adrenal Gland: Physiology, Pathology, and Pharmacology (Mineralocorticoids & Glucocorticoids)
Suprarenal glands are located on the superior pole of each kidney. Each gland has two distinct developmental origins that divide it into two regions. The catecholamine secreting medulla is derived from the neural crest and is made of chromaffin cells. The cortex is derived from the mesoderm and it consists of three layers: the catecholamine secreting zona glomerulosa, cortisol secreting zona fasciculata and the zona reticularis that secretes androgens.There are many common pathologies that can present, e.g., adrenal hypo-plasia, hyperplasia and adrenal tumors specific to each region.
read more
Load more
Share
Ask Questions
Take Notes
Download Slides
Report Mistake
Comments
show all Show less
My Notes
show all Show less
Learning Material 2
show all Show less
Report mistake
Transcript
0 of 0

00:01 Let's move on to the zona glomerulosa and mineralocorticoid function. 00:07 Now remember that when we are talking about mineralocorticoids or even corticosteroids, we are talking about using a steroid receptor. 00:15 If you remember from your pharmacology lectures way back at the beginning, when we were looking at receptors, there are five major types of receptors. 00:24 Steroid receptors are intracellular receptors and so the drug, because it's lipophilic can cross the membrane easily and that's how the medications or the hormones work. 00:37 Now, if the steroid binds to the receptor inside the cell, it has to send a message into the nucleus. 00:45 It does so through something called an MRE or mineralocorticoid response element. 00:51 This MRE is part of the DNA molecule. The MRE exerts its effects through DNA and you have production of certain enzymes. 01:02 Now the aldosterone agonists are part of the renin angiotensin system, and they have a very strong salt retaining activity just like androgynous mineralocorticoids. 01:13 So, aldosterone agonists are also considered mineralocorticoids as well as diuretics. 01:19 A good example of a mineralocorticoid is Florinef or fludrocortisone. 01:25 Structurally it's very similar to cortisol. It has moderate glucocorticoid activity and very strong mineralocorticoid activity. 01:34 It is involved and can be treating cerebral salt wasting syndrome, it can be used in Addison's disease, it can be used in this disease called POTS or paroxysmal orthostatic tachycardia syndrome. 01:47 And it's also sometimes used in geriatric orthostatic hypotensive syncope. 01:53 So, what we're doing here is we're retaining salt so that the blood pressures are a little bit higher and it prevents the drop in blood pressure that geriatric patients have when they stand up. 02:06 Spironolactone is a diuretic, we discussed it already in the hypertension section of pharmacology, but we also use it as its mineralocorticoid function to treat hirsutism. 02:20 So, it has mild androgen and mild mineralocorticoid activity. 02:27 Let's move on to the zona fasciculata. This is where glucocorticoid production is occuring. 02:34 Now, glucocorticoids also enter the cell as a free molecule. It doesn't need to be converted cause it's already lipophilic. 02:42 It binds to the intracellular receptor or other proteins, and then enters into the nucleus as a complex. 02:49 Now, instead of an MRE, it binds to a GRE or the glucocorticoid response element which is still also a portion of the DNA. 03:00 The GRE regulates gene expression and transcription for its various functions. 03:06 Now, when we use synthetic glucocorticoids in patients, we have side effects. 03:10 That metabolic effect can be gluconeogenesis, lipolysis and reduced subdermal fat. 03:17 Morphologic changes can have lipid deposits in certain spots such as the face, the neck, and the shoulder. 03:24 So I want to go over that just again so it's clear. Reduced subdermal fat refers to say the back in the skin, so people will have parchment like skin when they are given synthetic glucocorticoids for a long time. 03:37 People who are given synthetic glucocorticoids will have more fat in the face, shoulder and neck. 03:42 So, I say that they have a moon face, they have a round kind of full face, but they have thin parchment like skin. 03:52 There are some catabolic effects as well. Protein catabolism, and tissue wasting, and osteoporotic effects are all part and parcel of glucocorticoid excess activity. 04:03 So in other words, patients who are placed on synthetic glucocorticoids can have protein wasting and reduction of muscle mass. And osteoporosis is a major concern, and premature bone fracture is a major concern on people who are taking synthetic glucocorticoids for a long time. 04:23 Side effects can also be immunosuppressive as well. Cell mediated immunity can be affected by long term glucocorticoid use. 04:31 For example, lymphocyte dependant infections can become more rampant and so you have to be very careful of patients developing severe viral infections or increased susceptability to viral infections. 04:46 Renal function can be compromised. Remember cortisol is normally required for water excretion. 04:51 Anti-inflammatory effects, I wouldn't call it necessarily a side effect, it's actually the effect we are looking for. 04:58 There is often a dramatic suppression of multiple markers. That's often why we use synthetic glucocorticoids in high doses in the first place. 05:08 There is some neuropsychiatric issues. Excess cortisol causes giddiness and euphoria. 05:13 And synthetic cortisol derivatives can cause that same kind of behaviour change. 05:21 The prototypical synthetic glucocorticoid is prednisone. It has a long half life. It has quite good membrane pentration. 05:31 And it's often used in acute inflammation in most disease states. 05:35 It's often a steroid replacement therapy as well for people who have adrenal suppresion. 05:41 Dexamethasone is another synthetic glucocorticoid. It has an even longer half life than the original prednisone. 05:50 It has even better membrane presentation. It is often used in cancer chemotherapy as part of an adjunct to treatment regimen. 06:00 Triamcinolone, beclomethasone, budesonide are other glucocorticoids. 06:05 Beclomethasone is readily penetrating the respiratory mucosa so we often use it in pulmonary inhalers. 06:14 Let's take a look at glucocorticoid synthesis inhibitors. 06:18 Now this is a drug, or a set of drugs that we use to actually reduce excess endogenous cortisol production. 06:26 Now, interestingly enough ketoconazole, you might recognize this as antifungal medication. 06:31 We do use it in adrenal adenoma, breast cancer and prostate cancer. 06:35 And it is also used in hirsutism for the treatment of excess cortisol levels. 06:41 Metyrapone is another medication that we use in glucocoritcoid pharmacology. 06:47 It inhibits synthesis of cortisol. We actually use it more for diagnositic testing rather than actual therapy. 06:55 Other agent blocks conversion of cholesterol to the precursors of cortisol and others endogenous steroids. 07:02 It is used in steroid producing cancers to prevent excess steroid in the body. 07:09 Zona reticularis function and adreanal androgens has been covered in another lecture, so I won't go into too much detail here.

The lecture Mineralocorticoids and Glucocorticoids – Adrenal Pharmacology by Pravin Shukle, MD is from the course Endocrine Pharmacology. It contains the following chapters:

Which is the signaling pathway for mineralocorticoids and glucocorticoids?

Which of the following best describes the side effect profile of glucocorticoids?

What is the difference between prednisone and dexamethasone?

Ketoconazole does NOT have a therapeutic role in which of the following conditions?

Which of the following conditions does NOT improve with induction of mineralocorticoid activity?