Inflammation
Inflammation is a complex set of responses to infection and injury involving leukocytes as the principal cellular mediators in the body’s defense against pathogenic organisms. Inflammation is also seen as a response to tissue injury in the process of wound healing. The 5 cardinal signs of inflammation are pain, heat, redness, swelling, and loss of function. The major cellular response involves neutrophils and macrophages to phagocytose and lyse the injurious organism or repair necrosed tissue after injury. Inflammation can be pathologic if it is prolonged or when normal processes create an excessive response (such as with atherosclerosis). There are multiple mediators of inflammation that overlap with innate immunity when they respond to injurious stimuli. Inflammation can become chronic, resulting in the formation of granulomas, tissue damage, and the loss of organ function.
read more 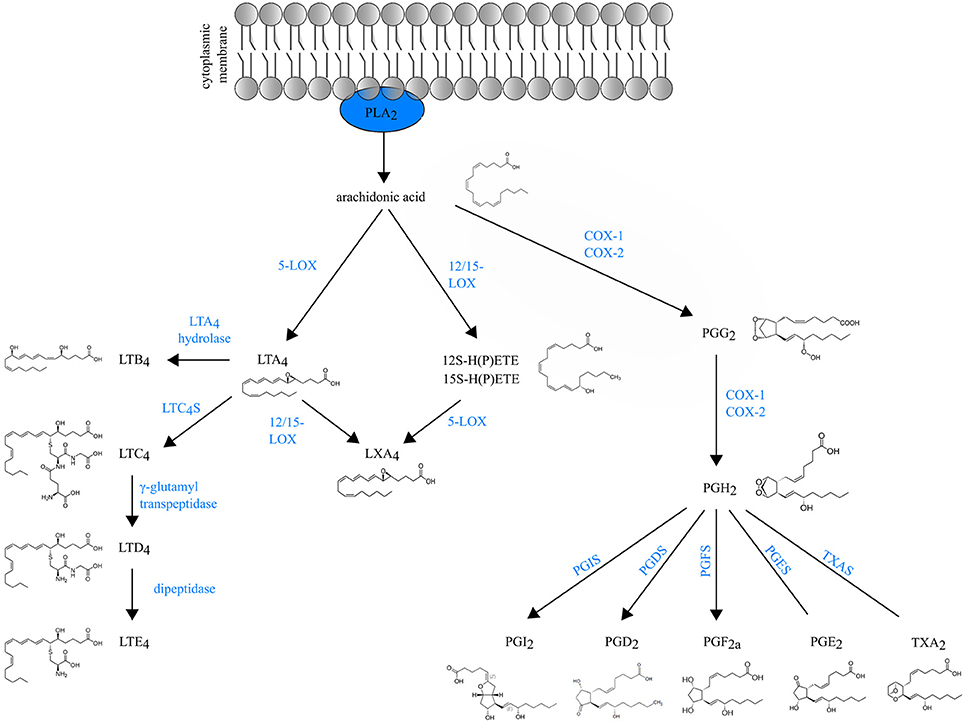 Eicosanoids
Eicosanoids are cell-signaling molecules produced from arachidonic acid. With the action of phospholipase A2, arachidonic acid is released from the plasma membrane. The different families of eicosanoids, which are prostaglandins (PGs), thromboxanes (TXA2s), prostacyclin (PGI2), lipoxins (LXs), and leukotrienes (LTs), emerge from a series of reactions catalyzed by different enzymes. The LTs and LXs are products of the lipoxygenase (LOX) pathway. The remaining eicosanoids are produced from the COX pathway, which involves 2 enzymes, COX-1 and COX-2. Eicosanoids are involved in various physiological and pathological processes. Thromboxanes cause platelet aggregation and are potent vasoconstrictors. Leukotrienes mediate allergic responses, while LXs have anti-inflammatory activities. Principal actions of PGs include vasodilation, smooth muscle contraction, and inflammation. Prostacyclin, a member of the PG family, has a potent vasodilatory effect. Both biologic actions and inhibitions of eicosanoids are mechanisms used in pharmacologic agents for various medical conditions and desired clinical effects.
read more
Load more
Share
Ask Questions
Take Notes
Download Slides
Report Mistake
Comments
show all Show less
My Notes
show all Show less
Learning Material 2
show all Show less
Report mistake
Transcript
0 of 0

00:01 So Leukocyte Mediators. 00:03 We have proteases. We've talked about that. 00:06 Reactive Oxygen Species. We've talked about that. 00:09 Very briefly, let's talk about Platelet Activating Factor or PAF It's made from membrane phospholipids. 00:16 It didn't causes not only vasodilation increased permeability, but also platelet activation, hence the name. 00:24 It's also an important chemotactic agent. 00:27 Cytokines and we've talked about cytokines giving you a definition talked about some of them. 00:31 Remember the CXC chemokines are part of cytokines but cytokines like interleukin-1 and tumor necrosis factor are also going to be important mediators. 00:42 And then finally, arachidonic acid metabolites. 00:46 And we're gonna spend a bit of time talking about those because those are really important and we have good drugs for those. 00:53 The arachidonic acid metabolites include prostaglandins, leukotrienes, and lipoxins. 00:59 So let's look at these very briefly. 01:02 The AA or Arachidonic acid metabolites are 20-carbon polyunsaturated fatty acids, they usually have four double bonds in this 20 carbon chain. 01:13 They are released from the nuclear membrane, interestingly enough, by the activity of cytosolic phospholipase A2. 01:21 We care about that because things like steroids will have important anti-inflammatory agent by blocking this release of arachidonic acid metabolites. 01:32 Steroids have other effects, but that's one of the things that it does. 01:36 So Arachidonic Acid Metabolites. 01:38 Once we release the 20 carbon polyunsaturated precursor, it is then acted on by number of enzymes in different cell types. 01:48 And there is going to be a major pathway that involves a molecule, an enzyme called cyclooxygenase, abbreviated COX. 01:55 And this is an important pathway because it's pro inflammatory. 01:59 And we can block it with nonsteroidal anti-inflammatory drugs. 02:05 So we can inhibit cyclooxygenase (COX) we things like aspirin, and things like naproxen. 02:13 So we can block this. 02:14 We have really good drugs, and it's very profoundly anti-inflammatory for those of you who have ever taken an aspirin or naproxen or any of those other nonsteroidals. 02:26 There is a separate pathway. 02:28 And we'll show this schematically in just a second. 02:31 The lipoxygenase pathway, and this is going to make leukotrienes which are going to have vasoactive effects. 02:36 They're going to change vascular permeability, and vasodilation. 02:40 But they're also going to be chemotactic. 02:43 And finally, lipoxins. 02:46 So you remember one of those truisms that I told you a long time ago, for every pro there's an anti? Well, at the same time that we're making pro inflammatory mediators like prostaglandins and leukotrienes. 02:58 Similar pathways in parallel are using arachidonic acid to make things like lypoxins, which are anti-inflammatory. 03:06 So it's a beautiful kind of yin and yang counterregulatory pathway. 03:12 Alright, let's get down into some details, because again, we have important molecules, and these molecules may have important inhibitory molecules. 03:23 And moreover, cyclooxygenase, and downstream molecules occur over and over and over again in your clinical care of patients, but also on board exams. 03:35 So arachidonic acid release from the nuclear membrane is then acted on by various enzymes, and the first one we're going to talk about is COX or cyclooxygenase. 03:45 And it makes a variety of downstream mediators. 03:48 These are not important yet. 03:50 I'll get you to the important one in a minute, but they're progressively acted on, and modified to make slightly different structures. 03:58 From cyclooxygenase, we can get prostacyclin, also abbreviated PGI2. 04:05 This is going to cause vasodilation and inhibit platelet aggregation. 04:10 So this is actually an anticoagulant prostacyclin. 04:16 So in the endothelial cells, the final pathways prostacyclin. 04:20 But I can take the same precursor prostaglandin H2. 04:24 And in platelets, I'll make thromboxane A2. 04:28 Same precursors, different cells with different enzymatic activities with completely opposite results. 04:36 Prostacyclin (anticoagulant), Thromboxane A2 (procoagulant) it causes vasoconstriction and it promotes platelet aggregation. 04:46 So again, Yin and Yang, a pro and an anti involving this same pathway. 04:54 Further down, we can also get PGD2 and PGE2. 04:59 These are other kinds of metabolites that happen in other cells and different enzymatic activities. 05:04 And these are pro inflammatory. 05:05 They're going to cause vasodilation, and increased vascular permeability. 05:10 Okay, so that's just one example. 05:11 They're actually, there are many other branch points. 05:13 This is simplified, believe it or not. 05:17 We can inhibit with COX inhibitors, COX-1 and COX-2. 05:20 there are different isoforms in different tissues. 05:23 But basically, aspirin and indomethacin will inhibit cyclooxygenase. 05:28 And then we don't get all of those effects. 05:31 We don't get the same procoagulant or anticoagulant effects. 05:34 We don't get the same inflammatory mediators. 05:37 That's why aspirin is so good at treating inflammation. 05:43 Okay, so that was one pathway, we've now grayed that out. 05:45 We're gonna go another pathway. 05:48 So mainly through the lipooxygenase pathway. 05:50 So a different enzyme in a different pathway. 05:54 And we're going to make now the leukotrienes. 05:57 These are in general pro inflammatory, and pro chemotactic. 06:01 So you can see that the molecules again, don't memorize the names of the words, just let the entire kind of feeling flow over you. 06:13 So some of these are involved in chemotaxis. 06:16 And some are involved in pro inflammatory processes vasoconstriction, bronchospasm, increased vascular permeability. 06:24 So mainly so far, we've been talking about pro inflammatory outcomes from arachidonic acid. 06:31 well, remember that we also have this other pathway making lipoxins And these are going to be anti inflammatory. 06:40 They're going to inhibit neutrophil, adhesion, and chemotaxis. 06:44 So these pathways are really important in driving a variety of inflammatory mediators and driving a number of the inflammatory processes. 06:55 And it's worthwhile kind of at least having a conceptual framework. 06:58 to think about them. 07:01 At that point, now, we've covered how we get inflammatory cells like neutrophils into the sites of injury, what they recognize when they get there, how they know what's a friend and what's a foe, and then how they eat them, and degrade them, and kill them, and some of the mediators that they make. 07:20 So that was a lot, but a very important set of concepts and even details that are going to you're going to encounter every day in your clinical lives.

The lecture Leukocyte Mediators: Arachidonic Acid Metabolites by Richard Mitchell, MD is from the course Acute and Chronic Inflammation.

Which enzyme is responsible for releasing arachidonic acid from the nuclear membrane?

Which of the following has anti-inflammatory properties?

Which of the lipoxygenase pathway products is involved in chemotaxis?

What is the mechanism of action of non-steroidal anti-inflammatory drugs?