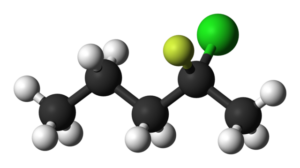 00:00 Right, identifying an enantiomer, is problematic and the reason for this being that, with the exception of the biological interactions that I showed you earlier on, where one will give rise to one biological response and one enantiomer will give rise to another biological response, there are chemically and physically no real differences between the two. They would boil at the same temperature, they will melt at the same temperature, they will undergo the same reactions and this is problematic. 00:30 However, as I said before, enantiomers can rotate the plane of polarised light in equal degrees, at opposite directions. Also as I said, the enantiomer which rotates the plane of polarized light to the right is given the denotation of plus, and the enantiomer which rotates the plane of polarized light to the left is given the designation minus. 00:56 Bear in mind, and I do stress this because it can get confusing. This is an experimental observation of what an individual molecule does to the plane of polarised light. Plus means it rotates it to the right, negative means it rotates it to the left. But there is no correlation between what is experimentally observed, and what we have just assigned under Cahn-Ingle-Prelog Rules. So you can actually have something which you designate as being rectus which actually rotates the plane of polarised light to the left. It’s counterintuitive, but it is something you need to be aware of. A racemic mixture, i.e. a mixture containing two enantiomers, equal concentrations, will not rotate the plane of polarized light at all. They will cancel each other out. 01:46 Something else to bear in mind, and this has been exploited on several occasions from a medical perspective. When trying to isolate one particular enantiomer from a mixture, from racemate, and that is that enantiomers react differently with other chiral compounds, mostly because they form diastereomers as we will see. This and the other ways of doing it, also consider for example, separation of chiral molecules on a chiral column, but this can be quite expensive. And now I want to draw your attention to the idea of asymmetric synthesis. As I said before because chemically and physically two enantiomers will have a similar properties, it is very difficult to separate them. Possible by reacting them with other chiral molecules where the diastereomers will have different physical and chemical properties. But there is another way of doing it, and this is where I want to draw your attention to some Nobel prize winners for this particular area. One of them William S. Knowles, who came up with the enantiomeric selective synthesis of levodopa used in the treatment of Parkinson’s Disease. Also, Ryoji Noyori responsible for the enantiomeric selective synthesis of carbapenem. Carbapenem is a very important beta-lactam based antibiotic as you may be aware. In fact it is one of the broadest spectrum of all of the beta-lactam antibiotics and is generally considered the last line of defense in the treatment of gram negative bacterial infection. 03:20 And finally Prof. Barry Sharpless who used the first asymmetric catalysis synthesis for the development of Paclitaxel which is a very important anticancer drug.

The lecture Identifying Enantiomers & Synthesis of Chiral Compounds – Stereochemistry by Adam Le Gresley, PhD is from the course Chemistry: Introduction.

How can a scientist differentiate between two enantiomers of a compound?

A racemic mixture does not rotate the plane-polarized light. Why?

During chiral synthesis of drugs, which features are kept in mind?

(1) 5,0 of 5 stars
Perfect!
By Daniel C. on 19. July 2019 for Identifying Enantiomers & Synthesis of Chiral Compounds – Stereochemistry

Excellent and precise to the point. I loved it. Thank you Dr. Gresley.

(1) 5,0 of 5 stars
Perfect!
By Daniel C. on 19. July 2019 for Identifying Enantiomers & Synthesis of Chiral Compounds – Stereochemistry

Excellent and precise to the point. I loved it. Thank you Dr. Gresley.