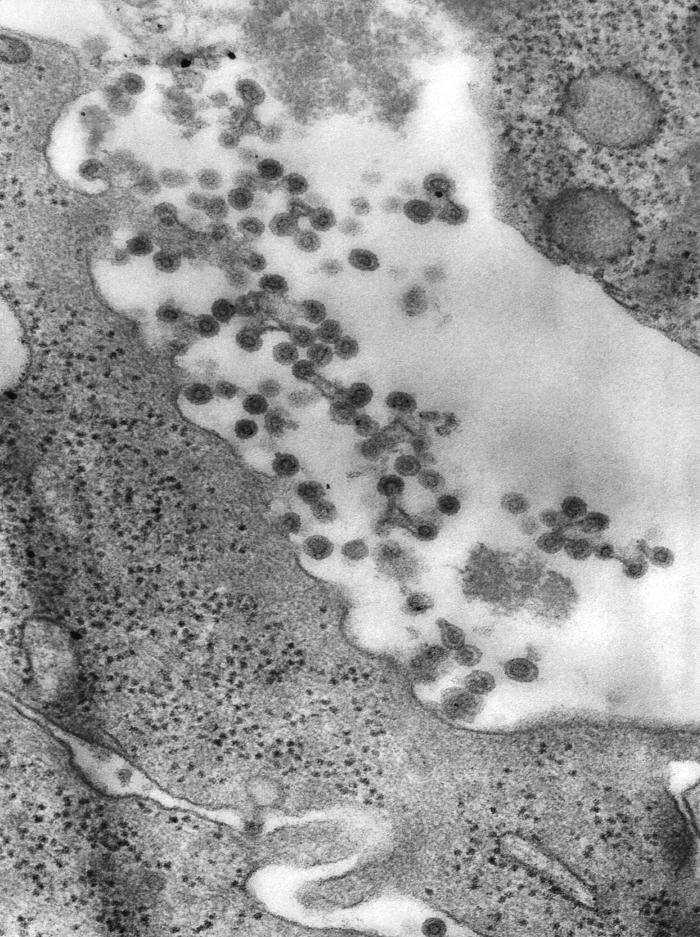 Rubella Virus
Rubella (also known as German measles or three-day measles) is caused by a single-stranded, positive-sense RNA virus of the Togaviridae family and the Rubivirus genus. Rubella only infects humans and spreads prenatally via vertical transmission or postnatally via droplet contact. Congenital rubella is particularly devastating and is associated with a classic triad of symptoms: cataracts, cardiac defects, and deafness. Infection in children and adults may be mild and present with constitutional symptoms along with a viral exanthem resembling the measles virus. Diagnosis is made clinically and confirmed with serum virus detection and serologic studies. Treatment is supportive and may be targeted depending on the organ system involved. Prevention is achieved through childhood vaccination with the measles, mumps, and rubella (MMR) vaccine.
read more

00:01 This will present as prematurity, hepatosplenomegaly, being small for gestational age, having a small head, microcephaly, which is similar to toxo, or having seizures. 00:05 HIV is also on at increasing prevalence in pregnant women in the United States and worldwide. 00:14 Sometimes people feel like HIV is getting less frequent in the United States because we’re doing a better job of providing condoms. 00:21 But remember, the patients with HIV now are getting excellent care in the U.S. 00:26 and they aren’t dying and they may go on to get pregnant. 00:29 So actually, the rates in pregnant women are going up. 00:33 Thus, transmission rates are important to keep track off. 00:38 A patient is more likely to acquire transmission of HIV in utero if the mother’s viral load is high. 00:48 On average, if the mother is not aware of her disease or is not treated, which is one in four HIV positive Americans. 00:58 A quarter of those babies will go on to acquire HIV. 01:01 However, if we find out the mother is positive just at the time of delivery, we can intervene with the baby and provide HIV medications and reduce that transmission rate to 6%. 01:14 And if we’re aware of mom’s status while she’s pregnant, we can drop that all the way down to less than 2%. 01:21 So undiagnosed babies with HIV really don’t need to occur if we’re routinely screening pregnant women, but it does happen. 01:32 And undiagnosed babies usually present a little bit later on in life with opportunistic infections or failure to thrive. 01:41 So all women need to be routinely tested during pregnancy, all of them. 01:46 Rich or poor or black or white, it doesn’t matter. 01:50 We need to test every one for HIV. 01:53 Routine screening of infants at birth for mothers who are not tested, further prevents infection in two ways. 02:03 First, it dramatically raises the rate at which women get tested and it then catches those babies who are missed and reduces their risk of infection from 25% to 6%. 02:15 And rapid testing is effective in infants. 02:18 So we can check real quick. 02:21 If a mother is exposed, we should test the infant with quantitative PCR at regular intervals to wait and see if this child turns positive. 02:31 Remember that even if the baby doesn’t have HIV and the mother does, that baby may have a positive antibody test as long as 18 months after delivery because mom’s antibodies can persist in the baby because of transplacental spreads for a long period of time. 02:51 How do we treat babies? We give them HAART therapy. 02:55 We do that for confirmed, infected infants. 02:59 During delivery, we will give mothers AZT and that can reduce transmission. 03:04 Also, if a mother is known to have a high viral load, we may proceed directly to C-section to reduce risk to the infant. 03:13 Exposed infants will get AZT orally for six weeks after birth. 03:18 And infants will get trimethoprim sulfamethoxazole prophylaxis until the HIV status is known to be negative. 03:29 Let’s switch gears one more time to rubella. 03:32 Rubella is rare in the U.S. because we have a vaccine, the measles-mumps-rubella vaccine, which is a great vaccine. 03:40 Rubella is an RNA virus. 03:43 And primary infection is not such a big deal. 03:47 Patients will get a low-grade fever, they’ll get headache, maybe conjunctivitis, maybe cough and congestion And they will get a classic rash. 03:55 Here’s a classic rash of a patient with rubella. 04:00 But it’s not really the primary infection that we’re worried about in children. 04:04 What we’re worried about is the other getting a primary infection while the infant is inside them. 04:12 So if a mother acquires the disease while she’s pregnant, the infant can be born stillborn. 04:20 Stillborn babies are reasonably common with congenital rubella. 04:26 Or they may have a triad of symptoms. 04:28 So the classic triad of rubella is cataracts, like we can see here, deafness and cardiac defects. 04:38 So eyes, ears, and heart. 04:41 In addition to this triad, infants may be born with blueberry muffin spots. 04:47 This is a commonly tested question. 04:50 These muffin spots are different than the rash I showed you in the previous patient. 04:54 That was just acquired rubella. 04:57 This is congenital rubella and they develop these blue lesions in their skin. 05:02 These blue lesions are because there is actually extramedullar hematopoiesis going on in the skin in these infants. 05:12 Let’s switch gears now to congenital CMV or cytomegalovirus. 05:17 This the most common congenital infection in the United States. 05:21 Fortunately, the majority are asymptomatic. 05:25 But 10% will have symptoms at birth. 05:28 This will present as prematurity, hepatosplenomegaly, being small for gestational age, having a small head, microcephaly, which is similar to toxo, or having seizures. 05:39 They may also have late symptoms, which include hearing, vision loss, developmental delay or a seizure disorder. 05:49 So early symptoms are fairly non-specific except they do have microcephaly and then later symptoms, they can develop hearing and vision loss, developmental delay and seizures.

The lecture HIV and Rubella (German Measles) by Brian Alverson, MD is from the course Neonatology (Newborn Medicine). It contains the following chapters:

What is the best way to reduce HIV transmission in newborns in the US?