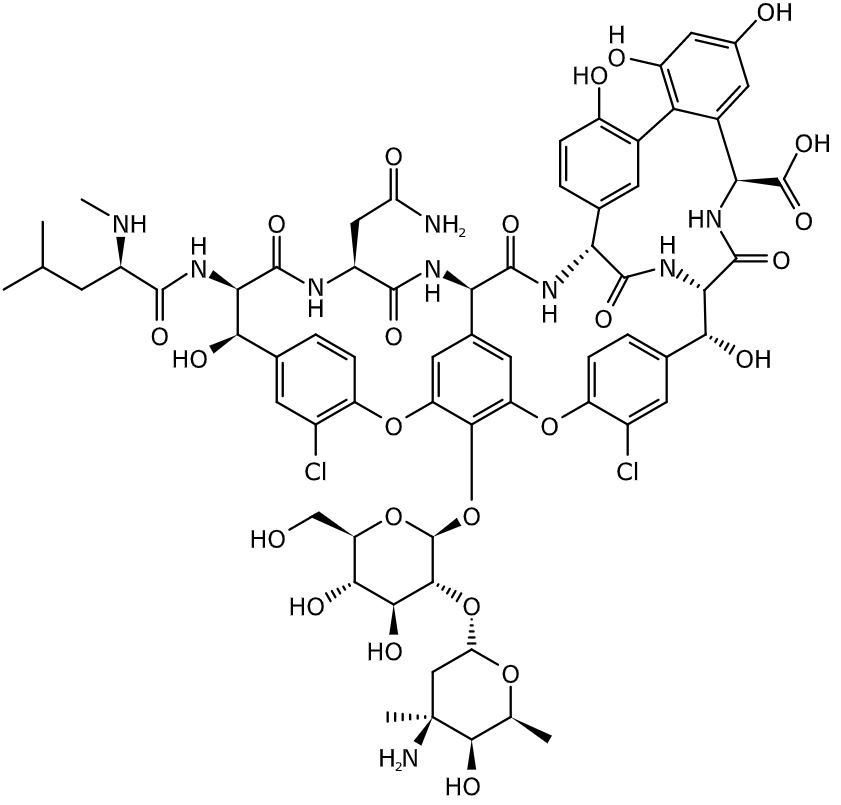 00:01 We also have some glycopeptide antibiotics, the most commonly known of the glycopeptide type antibiotics is vancomycin and I've mentioned it in some of my other lectures. 00:11 Vancomycin is a bacterial glycoprotein. It binds to the peptidoglycan in the cell wall itself. 00:20 It binds to the alanine terminal and it acts as a stop function in cell wall synthesis. 00:26 One of the downsides of this particular agent is that if the agent has an altered alanine terminal on its NAG, it will now allow vancomycin to bind therefore, in these particular bacteria who have a decreased affinity for vancomycin, they tend to be Vancomycin-resistant? Now, vancomycin is limited to serious infections only. 00:51 It's a very powerful agent, it has some side effects that I'll mention later and it's a large molecule. 00:58 Because it's such large molecule it does not cross the blood-brain barrier very well. 01:02 It is often used intrathecally in certain serious spinal infection so people with really severe spinal or central meningitis or spinal meningitis, we end, they're resistant to therapy and they are really, really, sick we can actually inject it directly into the spine in a buffered solution and treat the infection quite well. 01:26 Now, we can use this drug orally but as I said before it doesn't really cross the blood-brain barrier and it also doesn't cross the gut-barrier either. 01:36 It stays in the gut so it makes sense that the only place we're gonna use it as an oral agent is in infections of the gut itself. 01:45 An example is an enterococcus-mediated infection. 01:48 Now one of the down side is that we're now starting to see vancomycin-resistant enterococci. 01:54 Vancomycin has some toxicity issues. 01:57 You can get something called Red Man Syndrome. 02:00 I want you to remember this, rather sexist term, it is always on exams. 02:05 I am gonna guarantee you that it's gonna be on your test. It doesn't matter if you are writing your USMLE or if you are writing an infectious disease exam, Red man syndrome, on your exam, vancomycin. 02:17 Red man syndrome is essentially a severe cutaneous reaction where you have tremendous flushing people turn a bright red and it's often because of histamine release. 02:27 You will also get other side effects in this medication including phlebitis, ototoxicity, and some nephrotoxicity as well. 02:34 Teicoplanin is another drug in this drug class. 02:38 Teicoplanin is even more complicated than vancomycin in structure and in fact, when you take a look at the structure here on the slide, you will see that there's a red R way up in the corner, that R can be many different groups, it could be a whole chain of structures so it's not just what you are seeing on the screen here today, it's actually a much more complicated molecule than what Iâ€(Trademark)m showing you. 03:03 Now teicoplanin is used in prophylaxis, it's not really used in a lot of clinical practice. 03:09 It's used for treatment of methicillin resistant staph aureus and methicillin resistant enterococcus faecalis. 03:17 It's also used for the treatment of pseudomembranous colitis and in clostridium difficile diarrhea. 03:25 Alright, we're almost done. I have one more to show you. 03:29 Let's take a look at this drug. This is called bacitracin. 03:32 Bacitracin is very commonly used in the prevention of certain types of infections and we often will use it as a prophylactic measure on the wards. 03:40 It's a bacterophenol inhibitor. 03:42 It's used in the topical treatment of certain types of infections and it's used in decontamination syndromes. 03:51 It's used in staph colonization of the skin, so sometimes you'll see dermatologist using it for particularly bad superficial infections. 04:02 One of the problems with bacitracin taken intravenously or parenterally is that it causes nephrotoxicity and because of that and because we have other agents that can do the job just as well, we tend not to use it intravenously or what we call parenterally. 04:20 We prefer instead just to use it on the surface of the skin and you'll see it often used on the wards when you have an MRSA outbreak. 04:30 Okay, that's it, well done good luck on your exams, you're gonna do well.

Which statement regarding vancomycin is false?

Which statement is false?

Why is bacitracin NOT used parenterally?