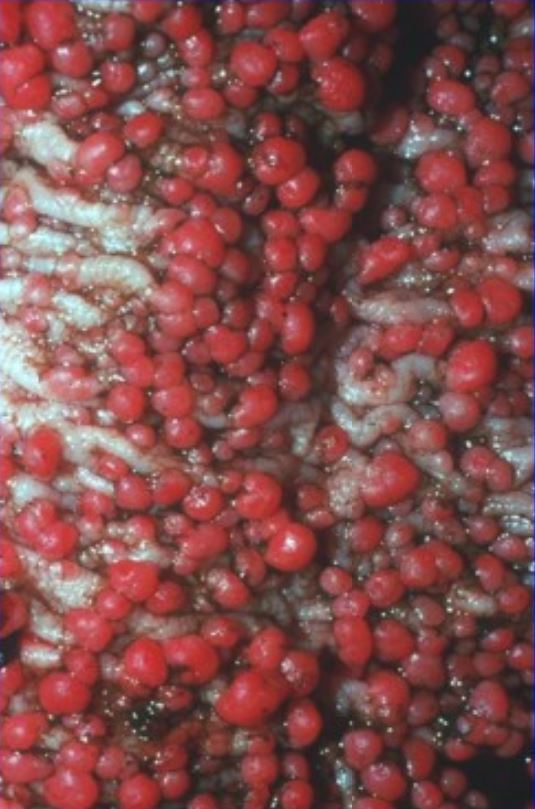 Familial Adenomatous Polyposis
Familial adenomatous polyposis (FAP) is an autosomal dominant inherited genetic disorder that presents with numerous adenomatous polyps in the colon. Familial adenomatous polyposis is the most common of the polyposis syndromes, which is a group of inherited or acquired conditions characterized by the growth of polyps in the GI tract, associated with other extracolonic features. These syndromes are caused by mutations in specific genes associated with tumor suppression or cell cycle regulation. All patients with FAP will develop colon cancer by age 35–40 years if left untreated. Management is with a surveillance program and colectomy.
read more 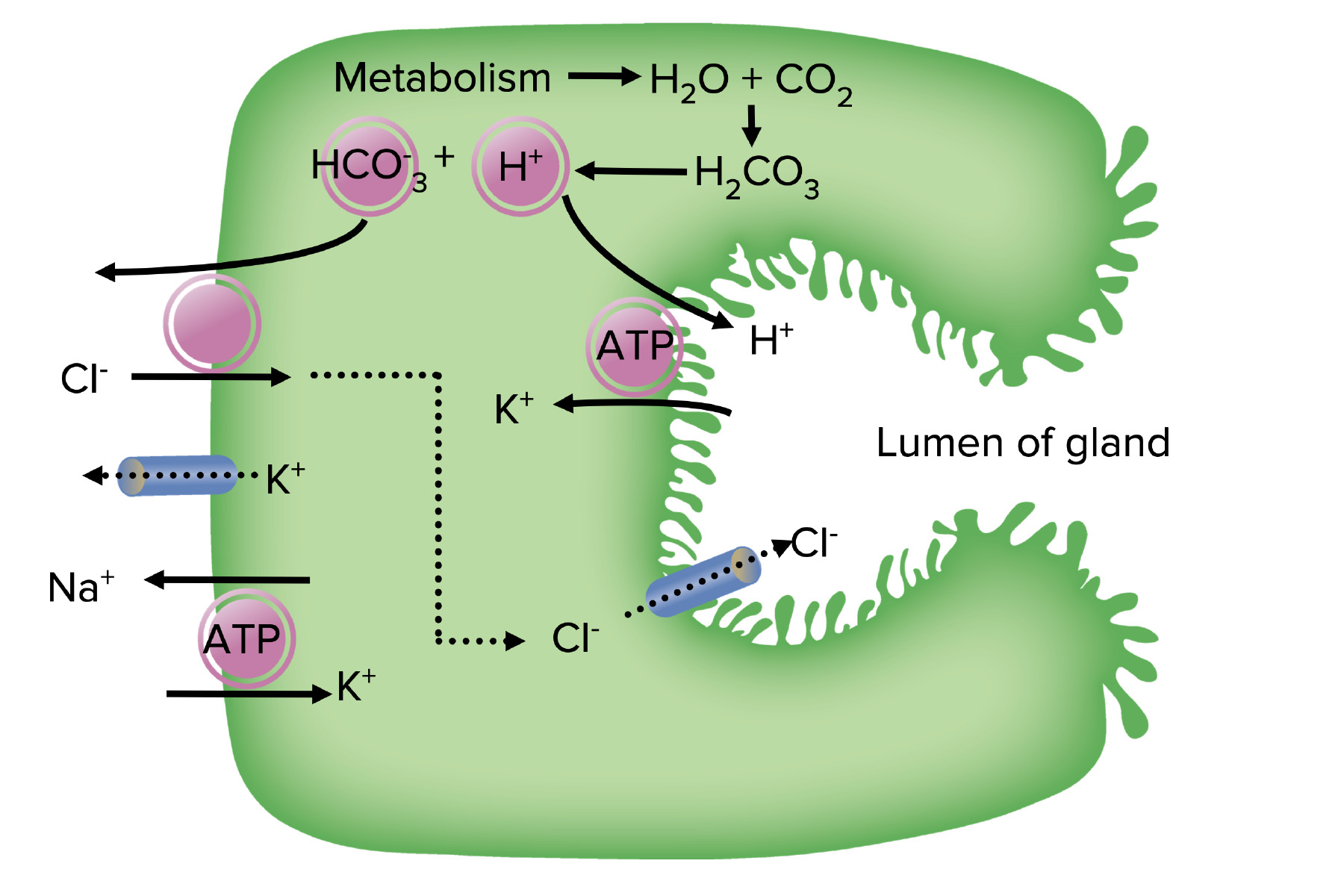 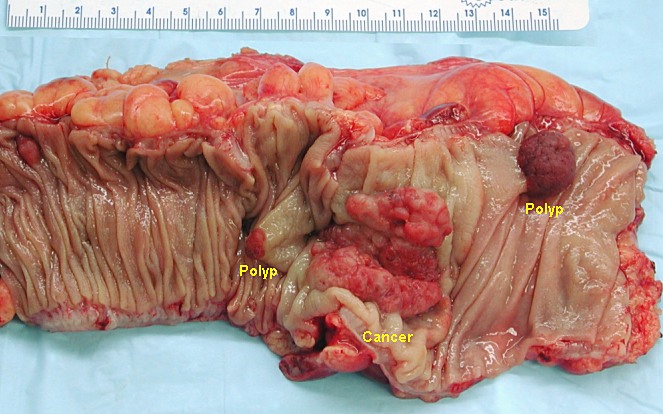 Colon Polyps
Colon polyps are growths of mucosal tissue in the colon, the most common site of polyps in the GI tract. Polyps can be classified as neoplastic or nonneoplastic and may be associated with genetic syndromes. Hyperplastic polyps are nonneoplastic and are the most common type overall, whereas adenomas are the most common type of neoplastic polyp and have the potential to progress to cancer. For most people without hereditary syndromes, colon cancer screening should begin at age 50 (at age 45 for Black individuals) and in adolescence for those with the rare familial adenomatous polyposis (FAP) syndrome. Diagnosis is by biopsy, and management includes frequent surveillance in people with adenomatous polyps or screening every 10 years in the general population until age 75.
read more 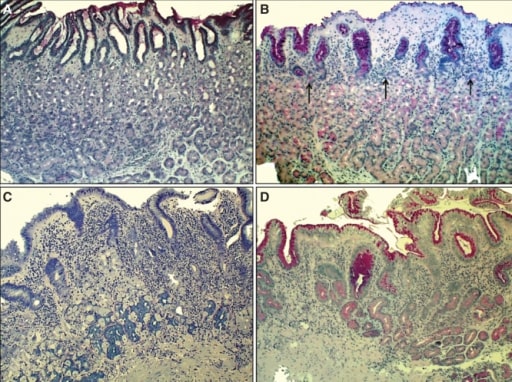 Gastritis
Gastritis refers to inflammation of the gastric mucosa. Gastritis may occur suddenly (acute gastritis) or slowly over time (chronic gastritis). Gastritis may be asymptomatic or with symptoms, including burning abdominal pain (which either worsens or improves with eating), dyspepsia, nausea, and vomiting. The most common etiologies for gastritis are Helicobacter pylori infection and autoimmune disease. Chronic gastritis is a risk factor for gastric cancer. Management involves the use of proton pump inhibitors with antibiotics (in case of H. pylori infection), avoidance of offending agents, and replacement of associated deficiencies.
read more
Load more
Share
Ask Questions
Take Notes
Download Slides
Report Mistake
Comments
show all Show less
My Notes
show all Show less
Learning Material 2
show all Show less
Report mistake
Transcript
0 of 0

00:00 Let's talk about gastric polyps. Histologically divided as hyperplastic polyp associated with adjacent injury, Adenomatous polyp associated with atrophic gastritis. Adenomatous polyp considered pre−malignant. Any time that you have a polyp, you never leave it behind. Same concept applies to your colonic polyps. When we do our colonic polyps, we’ll be doing our tubular and our villous. The tubular has less of a chance of going on to malignancy but it still could, and you never leave a polyp behind. Here, the same concept. 00:42 Hyperplastic and fundic polyps are not pre−malignant. Hyperplastic and fundic polyps, not so much. 00:51 The adenomatous polyps, however, more so. But in general, you always remove a polyp.

The lecture Gastric Polyps by Carlo Raj, MD is from the course Stomach and Duodenum Diseases.

A 52-year-old man comes to the physician's office for a regular checkup. He feels healthy and has not seen a doctor in years. A diagnostic colonoscopy is performed and shows a polyp of about 2.2 cm in size. What is the NEXT step in the management of this patient?

A 65-year-old woman with a family history of colon cancer comes to the clinic for a colonoscopy. The colonoscopy reveals multiple hyperplastic polyps in her colon. What advice should you provide about the polyps?

Thank you so much for the lectures. This is pretty thorough and easy to understand.

Thank you so much for the lectures. This is pretty thorough and easy to understand.