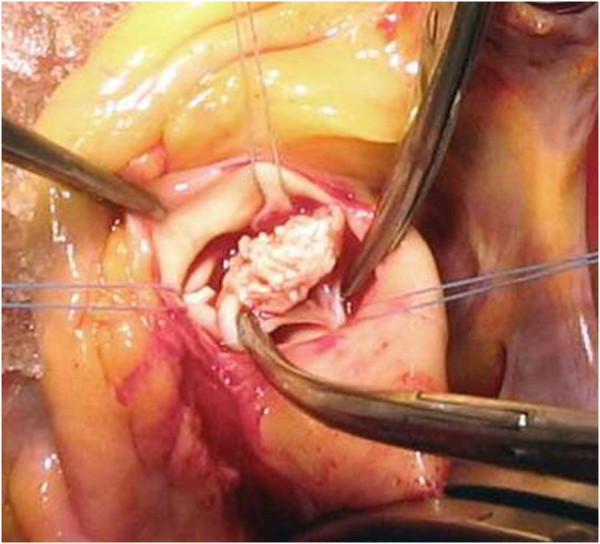 00:01 Let's talk about infective endocarditis. 00:03 So, this is a microbial infection of the heart valves or the mural endocardium. 00:08 And most commonly, it's going to be the valves. 00:11 So, we kind of break it down into two general flavors: acute infective endocarditis and subacute. 00:21 Acute infective endocarditis can be caused by highly virulent bacteria. 00:27 Highly virulent bugs like Staphylococcus aureus that elaborate a number of proteases that are quite destructive. 00:35 In most cases of acute infective endocarditis, the heart valve is previously normal. 00:40 Okay, I'm going to emphasize this. These are usual things. They are not absolute. 00:45 So, when a heart valve is normally previously normal, the tissue destruction tends to be very aggressive and rapid. 00:52 And in most cases, you cannot treat them with antibiotics. 00:56 You're going to need to surgically remove the infected valve and put in a new valve. 01:00 And overall, given all these features of acute infective endocarditis, the mortality rate is much higher. 01:06 For the other flavor, subacute infective endocarditis tends to be lower virulent bugs such as a Strep. viridans. 01:14 This is a group-based streptococcus that normally lives in most people's oral pharynx, and its only real claim to fame is that it can stick to an abnormal valve surface. 01:24 So, it can stick to a rheumatic valve, for example. 01:27 But it's not particularly aggressive. It doesn't make a lot of proteases. 01:30 So, it tends to be kind of a kinder, gentler bug if you think about it, but it does have that one capability of sticking to abnormal valve surfaces. 01:39 So, usually, again, usually, in subacute infective endocarditis, the valve is previously deformed and usually due to rheumatic valvular disease. 01:48 The tissue destruction is relatively low, and in many cases, we can treat this and cure this with a long course. 01:56 That says four to six weeks of antibiotics. 01:59 And because it's a lower virulence bug and the damage is less, the mortality rate is much lower. 02:06 So, that's kind of how we think about acute versus subacute, but there will be many cases where there is an overlap, and it doesn't neatly fit into one or the other category. 02:15 So, again, kind of looking at this, healthy valves. 02:19 If you have a healthy valve and you have an endocarditis, it's very likely to be Staph. aureus. 02:24 Very likely, but not always. And we'll talk about some other ones. 02:28 If you have a previously damaged or abnormal valve, it's more likely to be Strep. viridans or a low virulence bug of that ilk. 02:35 And if you have a prosthetic valve, you've had a previous valve replacement for whatever reason, the most common early, in the pre-operative period, bug, is a coagulase-negative staphylococcus. 02:49 That is the Staphylococcus epidermidis for example. 02:52 That is a contamination that occurred during surgical procedure and with bacteria sitting on now a foreign body. 03:01 Other causes of infective endocarditis, and this one is a kind of a mnemonic that you just need to remember. 03:09 The HACEK, H-A-C-E-K, are kind of low virulence bugs that don't grow very well. 03:17 They tend to be rather fastidious, and we have to do special tricks in order to make the diagnosis of those particular bugs. 03:23 So, Heamophilus, Actinobacillus, Cardiobacterium, Eikenella, and Kingella. HACEK. 03:33 So, those are a series of bugs that can cause endocarditis. 03:37 Again, less common than what was on the previous slide. 03:39 And then, you can also have completely culture-negative endocarditis. 03:44 10% or more of cases may never culture out the bug, and then you're stuck with trying to figure out well, what would help? What antibiotic do I treat them with? This can be due - the culture-negative endocarditis can be due to prior antibiotic therapy, some bugs are rather fastidious, and you can't isolate them, or they're deeply embedded organisms within the enlarging vegetation that we'll talk about in the next few slides, and it may be very difficult to get any significant number in your blood cultures.

The lecture Definition and Etiology – Infective Endocarditis by Richard Mitchell, MD is from the course Valvular and Hypertensive Heart Disease.

What structure, other than cardiac valves, may be infected by microbes in infective endocarditis?

Which of the following is a true statement regarding the differences between acute and subacute infective endocarditis?

Which species of bacteria is typically the cause of acute infective endocarditis in prosthetic valves during the perioperative period?

Which of the following bacteria species is NOT a HACEK organism?