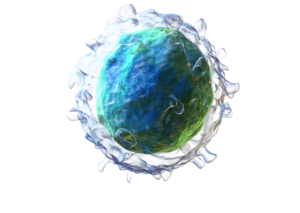 00:01 Chemokines can be grouped into four different family. 00:06 They are essentially chemotactic cytokines. 00:10 But that’s not the only thing they do, they don’t just act as chemotactic factors, they have multiple other effects as well. 00:18 The four families are defined based upon the arrangement of cysteine amino acids in their structure. 00:27 So the C family chemokines just have a single cysteine that forms a disulphide bond. 00:35 And there are quite a few members of this family. 00:39 One example is a chemokine called lymphotactin or XCL1, to give it its alternative name. 00:49 The CC family of chemokines have two cysteine residues that are next to each other. 00:57 So two adjacent cysteine residues. 01:00 And an example of a CC family chemokine is RANTES or CCL5. 01:09 CXC family chemokines have two cysteines that are separated by a single amino acid. 01:15 It really doesn’t matter which amino acid that is. 01:17 It can be any amino acid, that’s what the X represents here, that they have a cysteine, then another amino acid, and then a cysteine; CXC family chemokines. 01:27 An example of a CXC family chemokine is interleukin-8. 01:33 Interluekin-8 is a member of the interleukin cytokines that has chemotactic activity. 01:39 It can also be designated as CXCL8. 01:45 And then finally, the fourth member of the chemokine family is the CX3C family. 01:52 And here, you probably guess by now, they have a cysteine, then three amino acids, can be any three amino acids; and then another cysteine. 02:03 So two cysteines separated by three amino acids. 02:07 An example of a CX3C family chemokine is fractalkine or CX3CL1. 02:17 Chemokines form a chemotactic gradient. 02:21 So they’ll be produced in response to a stimulus. 02:25 And the place where they’re being produced, they’ll be at their highest concentration. 02:30 And then further away from that location, the concentration will decrease. 02:34 So the lymphocytes move on the concentration gradient. 02:39 In order to do that, they need to detect the presence of a chemokine. 02:44 So they have chemokine receptors on their surface. 02:49 And the chemokine receptors are typically members of a 7-transmembrane receptor family that are linked to G-proteins. 03:00 So they have a rather convoluted transmembrane sequence that passes through the cell surface membrane seven times. 03:07 And just underlying the cell membrane is a G-protein consisting of three units - alpha (α), beta (β) and gamma (γ). 03:16 And when the chemokine binds to its receptor, a signaling event is initiated leading to cell activation and migration of the cells up the chemokine gradient.

The lecture Chemokines – Lymphocyte Recirculation and Homing by Peter Delves, PhD is from the course Adaptive Immune System.

RANTES (regulated upon activation, normal T cell expressed and secreted) is classified as which of the chemokine family groups?

Which of the following best describes the CXC chemokine family?

Which of the following best describes the migration of lymphocytes via their chemokine receptors?