Cells of the Innate Immune Response 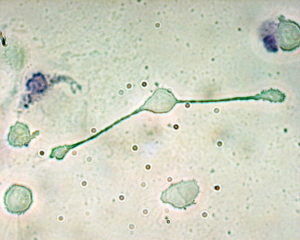 00:01 We’re going to look at the cells of the immune system. 00:04 Hematopoiesis occurs in the bone marrow, where there are self-renewing, multipotent, hematopoietic stem cells. 00:14 This means that these cells produce more stem cells, in other words they’re self-renewing and they’re multipotent. 00:21 They can become many different cell types. 00:25 And in order to develop into these different cell types, they can differentiate down one of two different pathways. 00:34 Those that develop down the myeloid pathway of cell differentiation will ultimately become either erythrocytes - red blood cells, or they’ll produce the megakaryocytes that produce ultimately the platelets. 00:52 Or a variety of cells of the innate immune response which we’ll be discussing very shortly. 01:00 Alternatively, hematopoietic stem cells can develop down the lymphoid pathway of cell differentiation. 01:08 And cells that go down this pathway will develop into the cells of the adaptive immune response or into natural killer cells, which are mostly cells of the innate response and other types of so called innate lymphoid cells. 01:26 So let’s have a look at the different cell types that are produced that will contribute towards innate immune responses. 01:37 The major white blood cell in the circulation, in fact account for around about 70% of circulating white blood cells is the neutrophil. 01:47 And these are involved predominantly in phagocytosis. 01:53 Monocytes which are found in the blood and macrophages which are derived from monocytes but found in the tissues are also phagocytic cells. 02:04 Dendritic cells, whilst being phagocytic, their main function is the activation of T-cells. 02:16 There is another cell type called the follicular dendritic cell, which is an entirely separate cell type from dendritic cells despite their similar name. 02:25 These cells have involved in the activation of B-cells. 02:31 Eosinophils, basophils and mast cells are specialized for the production of inflammatory mediators. 02:42 And then finally, regarding cells of the innate immune response, natural killer cells and other innate lymphoid cells have a variety of functions. 02:53 But the natural killer cell’s main function is to kill infected cells whereas other types of innate lymphoid cells have a diverse range of functions. 03:05 In fact this group of cells, these innate lymphoid cells are a relatively recently understood population of lymphocytes and they are very much a active area of immunological investigation, trying to tease out their precise properties.

The lecture Cells of the Innate Immune Response by Peter Delves, PhD is from the course Immune System: Overview and Cells. It contains the following chapters:

Which of the following cells mainly develops from common lymphoid progenitors?

Which phagocytic cells circulate in the bloodstream in order to reach distant sites of infection?

Author of lecture Cells of the Innate Immune Response

Absolutely AMAZING lecturer!! I was able to understand all the basics of immunology with just one watch! Great enthusiasm and clear explanation. Thank you Dr Peter Delves.

Absolutely AMAZING lecturer!! I was able to understand all the basics of immunology with just one watch! Great enthusiasm and clear explanation. Thank you Dr Peter Delves.