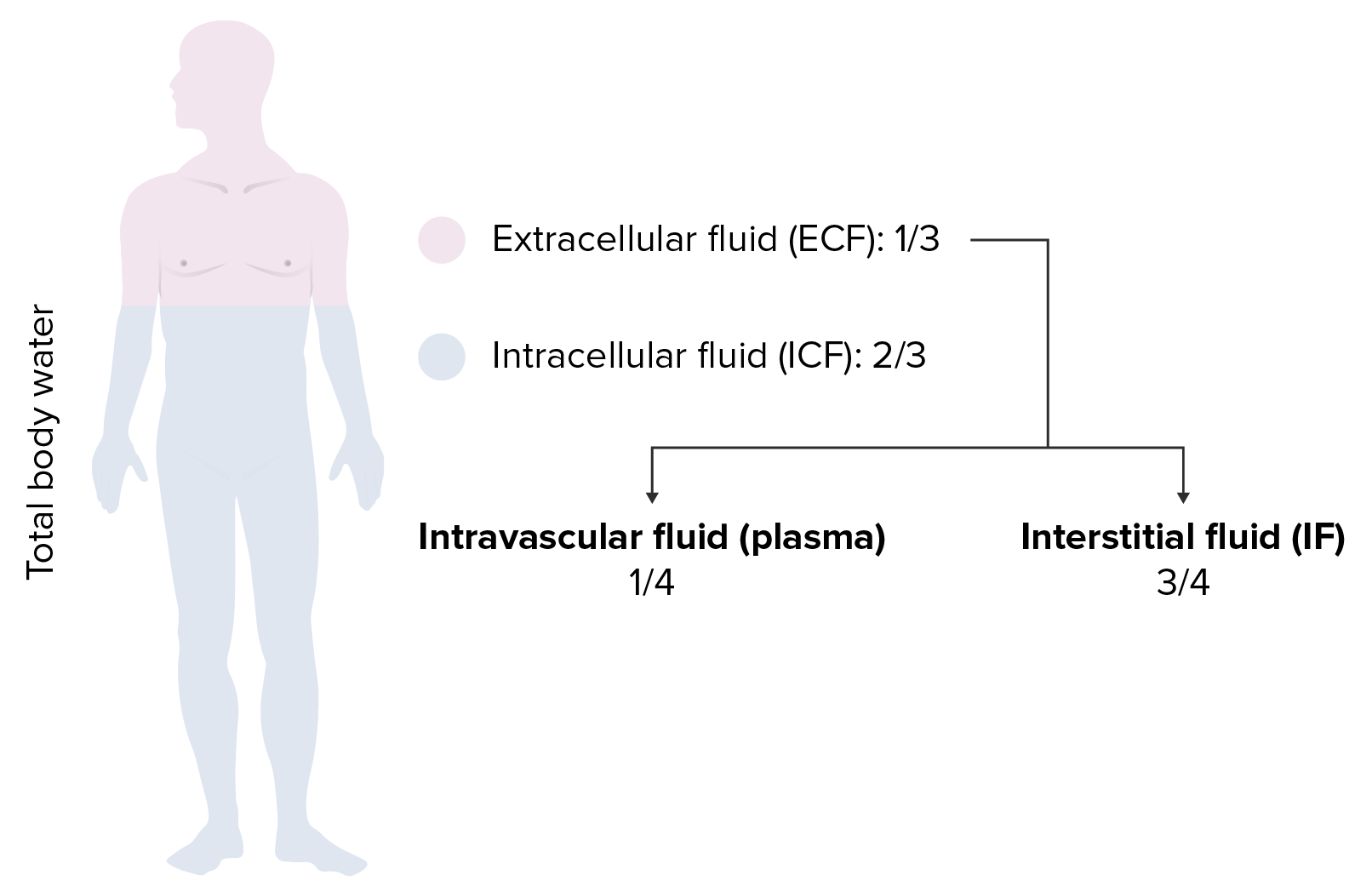 Intravenous Fluids
Intravenous fluids (IVFs) are one of the most common interventions administered in medicine to approximate physiologic bodily fluids. Intravenous fluids are divided into 2 categories: crystalloid and colloid solutions. Intravenous fluids have a wide variety of indications, including intravascular volume expansion, electrolyte manipulation, and maintenance fluids. Crystalloids and colloids have different general compositions, which affect distributions through the body’s fluid compartments and guide clinical use. Crystalloid solutions are typically used for patients who are hypovolemic, dehydrated, or have ongoing fluid losses. Colloidal solutions may be used in cases of low oncotic pressure. Providers should choose fluid types based on the clinical scenario and best available evidence. All recipients of IVFs should be closely monitored to determine the goal and status of the fluid therapy.
read more 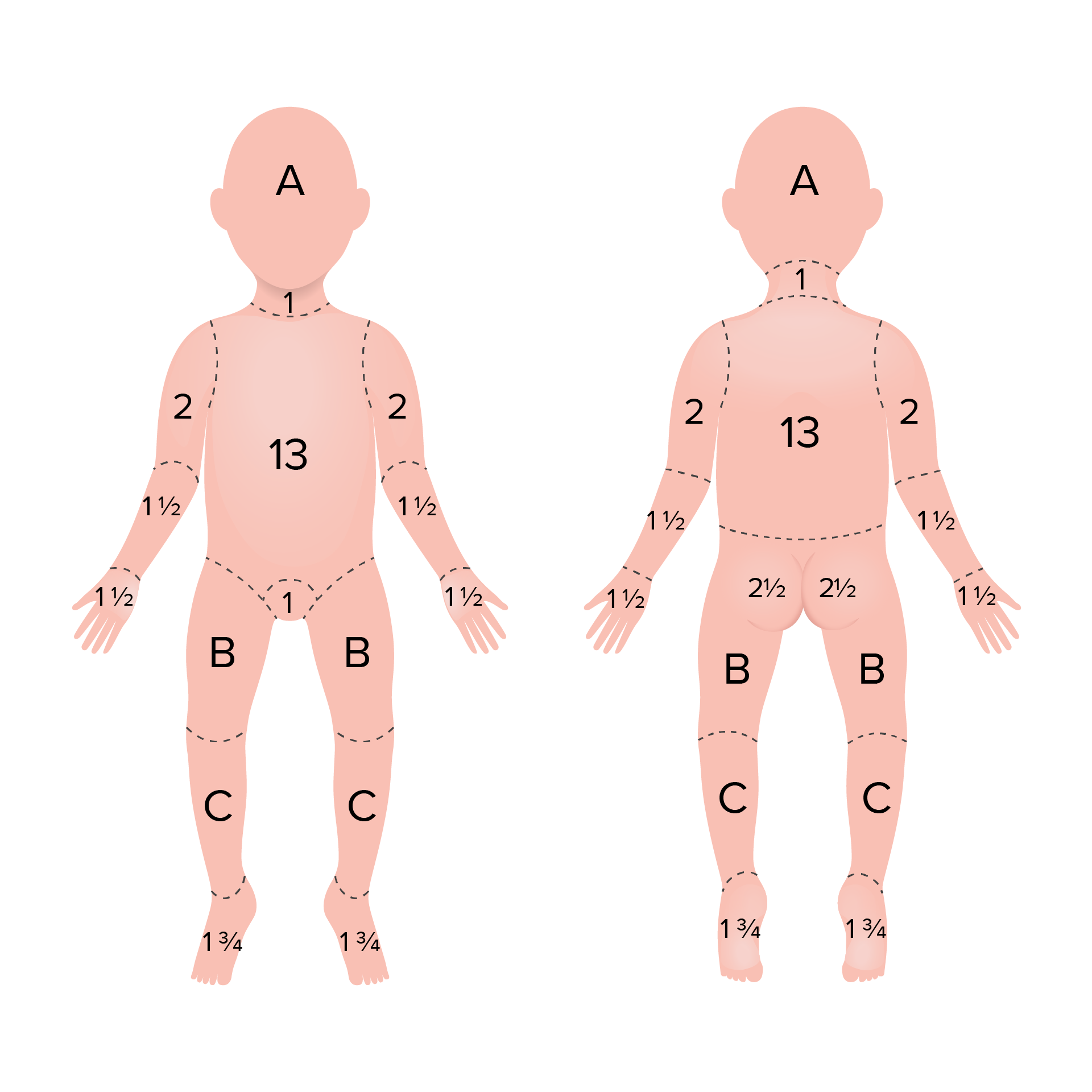 Burns
A burn is a type of injury to the skin and deeper tissues caused by exposure to heat, electricity, chemicals, friction, or radiation. Burns are classified according to their depth as superficial (1st-degree), partial-thickness (2nd-degree), full-thickness (3rd-degree), and 4th-degree burns. Management is greatly dependent on the extent of surface area affected and the depth of the burns. Management involves fluid resuscitation, adequate analgesia, and appropriate wound care with the goal of preventing opportunistic infection.
read more 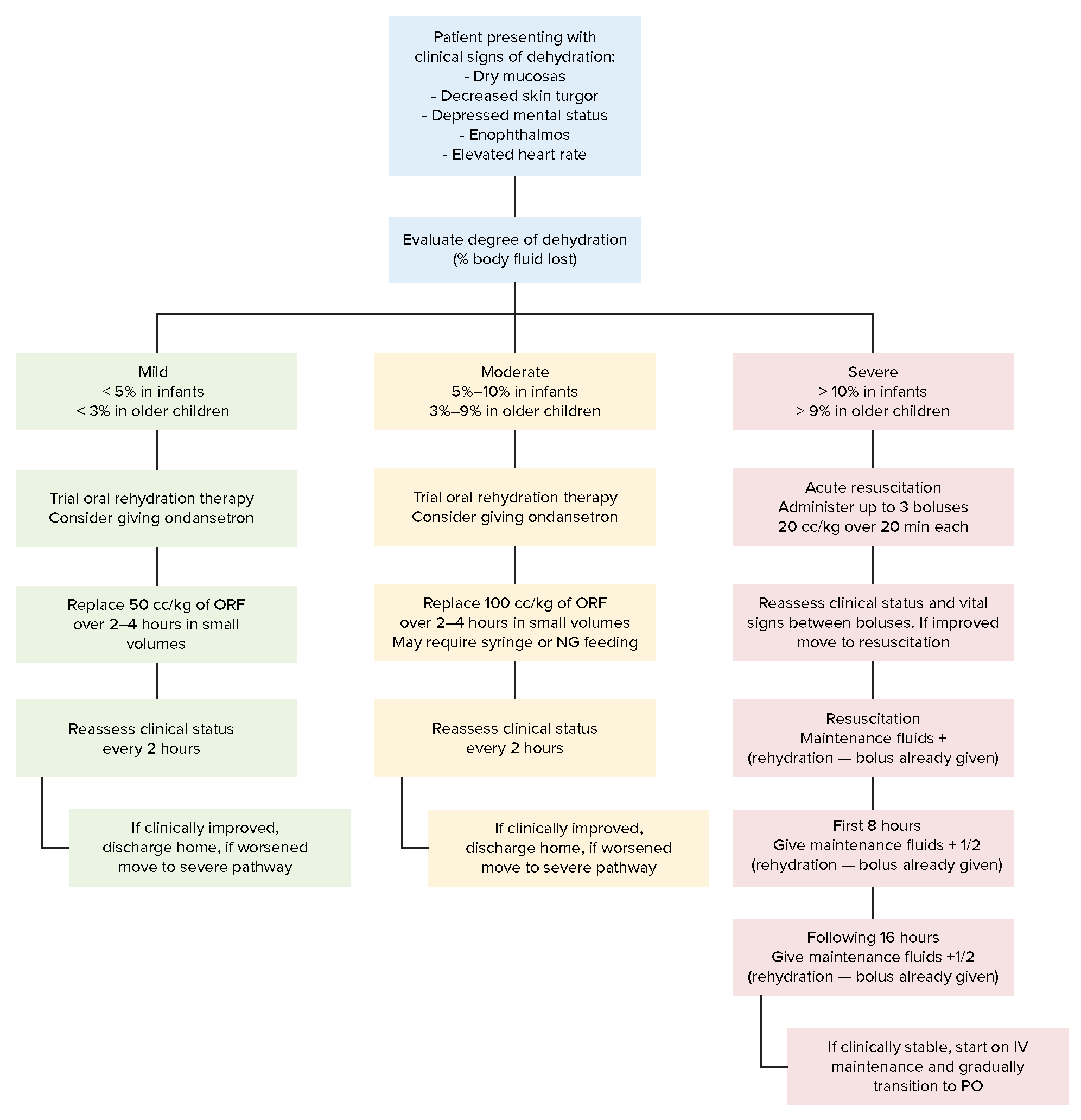 Fluid Replacement Therapy in Children
Children are particularly vulnerable to developing dehydration because they have higher insensible water loss and more elevated metabolic rates than adults. In addition, children's inability to communicate their needs compounds with large losses of fluids (e.g., diarrhea, vomiting), putting them at even higher risk. Dehydration is defined as a decrease in total body water, and can be characterized as mild, moderate, or severe. Fluid replacement treatment is based on severity. Clinicians must be prepared to administer optimal rehydration therapy in addition to the other required measures for the causal illness. When treated promptly, dehydration starts to resolve clinically within the first few hours.
read more
Load more
Share
Ask Questions
Take Notes
Download Slides
Report Mistake
Comments
show all Show less
My Notes
show all Show less
Learning Material 2
show all Show less
Report mistake
Transcript
0 of 0

00:01 In this lecture, we’ll discuss burns in children. 00:05 When you see a child with a burn, it’s important to identify the severity of that burn. 00:10 You should identify the thickness or type of burn, how extensive it is across the skin, where it’s located on the body, how long they were exposed to whatever it was that burned them, and the timing of the presentation, was there a delay between when they had the burn and when they showed up, which can be important especially in child abuse. 00:33 So let’s also talk about associated symptoms to burns. 00:39 Just because a patient is presenting with a burn, it doesn’t mean there isn’t something else going on that you might need to take care of right away. 00:47 Example would be a patient who has smoke inhalation injury, which you should think about in any patient who was in a fire. 00:56 You might think of carboxyhemoglobinemia also because that can cause problems with delivery of oxygen to peripheral tissues and you might want to check their hemoglobin electrophoresis. 01:09 Also, we don’t think of this, but it’s fairly common in house fires, patients may get cyanide poisoning. 01:17 This can happen because of the burning of plastics inside the house can release cyanide. 01:23 And lastly, if a patient has an electrical burn, consider the possibility of internal electrical injury especially in lightning strikes for example, but it can be in other electrical injuries as well. 01:34 So you need to assess for that as well especially looking at things like the muscles for CPK, the heart with an EKG. 01:41 They can also rhabdomyolysis, they can get anemia. 01:45 A variety of things can happen and you want to check those. 01:48 So let’s think about burn thickness. 01:52 In particular, we break things down into superficial, partial thickness or full thickness burns. 01:59 You can think of these as first, second and third degree burns. 02:03 Let’s start with first-degree burns or superficial burns. 02:08 These are generally only involving the epidermis. 02:11 They’re usually very red and they’re typically very painful. 02:16 So this is that red lesion after you’ve just touched something that was a bit too hot. 02:21 So here’s an example of a superficial burn. 02:24 In this case, this person got too much sun exposure. 02:27 You can see it’s very red. 02:29 But there’s not really any blistering happening or anything like that. 02:32 Next, we can break superficial partial thickness and deep partial thickness as two different categories of partial thickness burns. 02:43 These are second degree burns. 02:44 So in superficial partial thickness, this goes into the dermis, but that’s about as far as it goes. 02:51 These patients will blister because of disruption of that dermal layer. 02:57 They’re often red, moist, and edematous and they also will be painful. 03:03 So here’s an example of a superficial partial thickness burn. 03:09 It’s painful. 03:10 There’s an area where the blister has actually ruptured off. 03:13 Once the blister ruptures off, there is then an increase risk for superinfection. 03:19 If there’s intact skin, we don’t want to pop those blisters. 03:23 These weren’t caused by infection. 03:26 Remember blisters from infection, we want to pop. 03:29 Blisters from trauma or burns, we don’t want to pop. 03:33 So we’re going to leave them intact if we can. 03:36 If they’ve ruptured, you might put a topical antibiotic or something along those lines onto the burn to prevent any superinfection. 03:44 Moving on to deeper partial thickness burns, these involve most of the dermis, they can become pale or white in their nature. 03:56 They’re not blistering anymore and they’re a little bit ironically less painful as you’re starting to injure some of the nerve endings in that skin. 04:05 So here’s an example of a deep partial thickness burn, this patient has substantial sloughing of skin. 04:12 This is an infection risk and this is perhaps less painful, although it looks certainly worse than the previous one or it can still be painful. 04:22 So keeping in mind that we’re going to give pain control and pain therapy as needed for these patients. 04:28 Last is the full-thickness or third-degree burn. 04:33 This is typically a leathery burn. 04:35 It’s often charred if it was done by flames. 04:38 It’s generally painless, so they’ve really injured their nerves as well. 04:44 And these routinely scar or scar severely after they heal. 04:50 So here’s an example of a deep partial thickness burn, you can see these has gone well down into the dermis and has caused substantial damage. 05:00 This has substantial infection risk and generally is less painful but much more severe and will probably scar.

The lecture Burns in Children by Brian Alverson, MD is from the course Pediatric Emergency Medicine. It contains the following chapters:

Which of the following is appropriate for prevention of infection in burn wounds?

Author of lecture Burns in Children