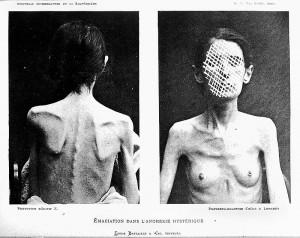 Anorexia, Bulimia, Binge-Eating: An Overview of Eating Disorders
Eating disorders like anorexia nervosa, bulimia nervosa, and the binge eating disorder are common diseases. Exact knowledge of the pathogenesis and symptoms of these diseases, which mostly affect young women, is crucial for a correct diagnosis and treatment. This article will help you to correctly diagnose the different eating disorders in both the second state exam and in professional life later on.
read more
Load more
Share
Ask Questions
Take Notes
Download Slides
Report Mistake
Comments
show all Show less
My Notes
show all Show less
Learning Material 2
show all Show less
Report mistake
Transcript
0 of 0

00:01 Let's move on now to talk about some of the other eating disorders starting with bulimia. 00:06 The life time prevalence is 1%, females are more affected than males, and the median age of onset is about 18 years old, so again, in the teens. 00:15 Diagnostic criteria incur recurrent episodes of binge eating, eating in a discrete period of time within a 2 hour period, and a sense of lack of control. 00:27 There's a recurrent inappropriate compensatory behavior to prevent weight gain and binge eating and inappropriate compensatory behavior both occur on average. 00:39 Bulimia includes recurrent episodes of binge eating and then eating in either a discrete period of time within any 2 hour period with a sense of lack of control. 00:52 There are recurrent inappropriate compensatory behaviors to help prevent weight gain and the binge eating and inappropriate compensatory behaviors can both occur. Their self-evaluation that's unduly influenced by body, shape, and weight, and the disturbance does not occur exclusively during episodes of anorexia. 01:14 Patients with bulimia actually tend to have an average body weight. 01:19 The major difference between bulimia and binge eating is that there is compensatory behavior influenced by guilt and a perception of appearance. So, what's the best treatment for bulimia? Well, it's individual psychotherapy, CBT, group therapy, and also pharmacology can help such as SSRI's which are usually the first-line agents. 01:44 So, what's the difference between bulimia and anorexia? Well, in bulimia, patients find their symptoms ego-dystonic. 01:52 In other words, they find their symptoms to be very distressing. 01:55 Whereas in anorexia, patients find their symptoms ego-syntonic, they're not distressing at all. 02:01 And in bulimia, patients are actually more likely to go to the doctor and ask for help. 02:07 Whereas in anorexia, patients are very reluctant to get help from their doctor. 02:12 Let's talk about Pica now. This is a repeated eating of actually non-food substances. 02:18 Things like chalk, clay, cloth, dirt, and eating behavior is inappropriate to the patient's developmental level, and it's not culturally supported or a social norm. 02:30 If the eating behavior occurs in the context of another mental disorder such as autism or schizophrenia or during a general medical condition, then that will better account for it. So, it's very important that you rule out things like other mental disorders and general medical conditions. 02:48 It's also important to note that pica is very different from self-injurious behavior. 02:54 So the difference is that somebody who has pica is eating non-food substances that can't actually harm them severely, things like chalk or dirt. 03:05 Whereas somebody who's making a suicidal gesture, is actually ingesting something that could cause extreme injury, something like batteries, knives, needles, so something that could be extremely and acutely dangerous. 03:20 Let's talk about rumination disorder. So this is repeated regurgitation of food which may be re-chewed, re-swallowed, or spit out. 03:30 Regurgitation of food is not due to a general medical condition such as esophageal reflux disease. 03:37 The regurgitation does not occur solely during the course of avoidant or restrictive food intake disorder. And if the eating behavior occurs in the context of another mental disorder or general medical condition, then that's going to be the more likely diagnosis. 03:55 So, you need to make sure to rule these things out and make sure that the severity of the eating behavior warrants additional, clinical attention when it is due to something like a general medical condition. 04:10 Now let's talk about unspecified feeding or eating disorder. 04:15 The diagnosis unspecified feeding or eating disorder applies to patients with symptoms of a feeding and eating disorder that cause significant distress or impair psychosocial functioning but it doesn't meet the full criteria to be a specific eating disorder. We've reviewed now some of the eating disorders. 04:37 You know a little bit about their diagnosis and a little bit about how to approach that patient and manage them.

The lecture Bulimia, Pica and Rumination Disorder by Helen Farrell, MD is from the course Control Disorders. It contains the following chapters:

Which of the following NOT a diagnostic criterion for Bulimia nervosa?

Which of the following statements regarding eating disorders is TRUE?

A 7-year-old girl is brought in by her mother complaining that she has been eating small pebbles for the past 2 months, even after the mother’s repeated attempts to stop her. What is the most likely diagnosis in this patient?

Which of the following disorders features repeated regurgitation not associated with a medical or psychiatric condition?

The content of what was ingested may indicate if the consumption of non-food objects is due to pica or self-injurious. Which of the following would elevate your suspicions of self-injury?