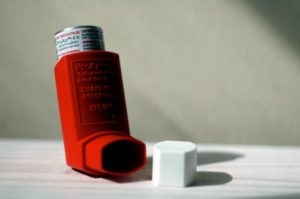 Antiasthmatics (Antiasthmatic Drugs) — Definition and Classification
Asthma is a chronic airway hyperresponsiveness (with acute exacerbations), which is widespread all over the world in both children and adults. In most cases, it is in response to environmental stimuli. The main pathological changes are bronchospasm, edema and mucosal plugging, and the symptoms are wheezing, cough and breathlessness. Asthma therapy is directed against bronchospasms or inhibition of inflammation in general or their mediators such as leukotrienes. The most common drugs used are inhaled β2 agonists and inhaled corticosteroids.
read more
Load more
Share
Ask Questions
Take Notes
Download Slides
Report Mistake
Comments
show all Show less
My Notes
show all Show less
Learning Material 2
show all Show less
Report mistake
Transcript
0 of 0

00:01 So, let's talk about bronchodilators. Now bronchodilator action is limited to taking that constricted inflammed airway and opening it up. The drug binds to the beta 2 receptor in the lung and it stimulates cyclic AMP in smooth muscle cells. 00:17 Those smooth muscles relax in the bronchial muscle and you get dilatation. 00:23 Now, obviously you're not fully treated because those airways are still kind of thick, aren't they? Short acting beta agonists generally last less than 6 hours such as albuterol. 00:35 Long acting beta agonists or LABAs act over 24 to 48 hours sometimes 12 hours. These are salmeterol, formoterol and so on. 00:45 Those drugs are used once or twice a day. Now, there is a drug specifically indicated for COPD that is also in the beta agonist list but we are going to leave that alone for now. 00:58 Toxicity of bronchodilators is pretty rare. You can sometimes get tachycardia or tremor and sometimes you can get hyperexcitibility, but as I said, because these are inflammed agents, you're not really going to have a lot of symptoms. 01:13 Methylxanthines are purine derivatives. Now caffeine is a methylxanthine. 01:18 So, when you think about effects and side effects, think about caffeine on your own body. 01:23 Theophylline is the prototypical respiratory methylxanthine. These drugs act by inhibiting phosphodiesterase. 01:32 And PDE3 activates bronchodilation. When you have these drugs on board, you may also increase diaphragmatic strength. 01:44 Two cups of coffee can actually cause bronchodilation so you can understand that these drugs may be quite potent. 01:52 The side effects are the same as drinking too much coffee. Gastrointestinal distress usually manisfested by cramping. 01:58 Tremor and insomnia. A toxicity of these agents can be arrhythmia and high blood pressure. And vomiting is also a potential side effect. 02:08 The antidote for these medications is beta blockers because you want to block the effects of hyperadrenergic states. 02:16 The next class of drugs are the muscarinic agents. The prototypical drug is ipatropium which is sold commonly as Atrovent. 02:25 When you look at the colour of puffer, its universal colour is going to be green or a green cap. 02:30 This agent will block muscarinic receptors in the airways. This prevent bronchoconstriction caused by vagal discharge. 02:39 So they may not be particularly effective if they have already constricted. 02:44 They may be used both in children and in adults. And these agents have no anti-inflammatory action. 02:52 The toxicity is minor atropine like effects so the toxicities are almost non existence. 02:58 They do not cause tremor and they do not cause arrhythmia which distinguishes these drugs from the beta agonists.

The lecture Bronchodilators by Pravin Shukle, MD is from the course Respiratory Pharmacology.

What is the mechanism of action of bronchodilators?

Which of the following is NOT an effect of beta-agonists?

Which common food product causes effects that are similar to those of methylxanthine?

slow and broken .... lectures must be energetic n lively and 1 hour long at least

slow and broken .... lectures must be energetic n lively and 1 hour long at least