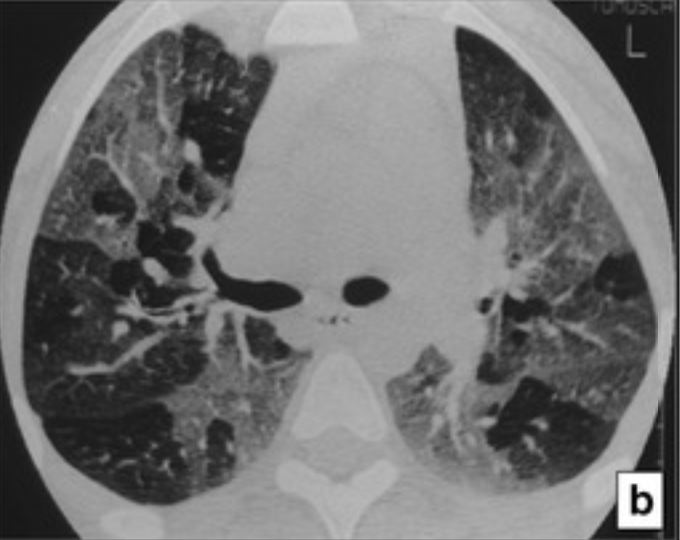 00:01 So let’s got back to this case, we have this 16-month old, who really has the symptoms of bronchiolitis: copious runny nose, fever, decreased oral intake. 00:11 What are we going to do? And specifically, how do you know isn’t asthma? This question will come up on the in-patient wards or in the office quite frequently. 00:22 Is this asthma or is this bronchiolitis? What’s going on? So let’s look deep into this question and say, well, what is the primary difference between asthma and bronchiolitis? Here we have a depiction of an airway, of a bronchiole inside a child’s chest. 00:43 The red is the smooth muscle surrounding that bronchiole and the green is the mucus that is accruing. 00:50 Classically, in asthma, we have a constriction of the smooth muscle, which is causing that narrowed airway. 00:58 Alternatively, in bronchiolitis, we have not so much constriction of the smooth muscle, but an accrual of a large amount of mucus. 01:06 You can see why these two patient would look from the outside exactly the same-- they both have a narrowed airway, they both have wheezing. 01:16 In one case it’s caused by mucus, in the other case it’s caused by smooth muscle constriction. 01:22 So a patient comes in and you’re asking yourself is this asthma or is this bronchiolitis/ You may just have to make your best guess. 01:31 Typically, children with asthma are going to be over two years of age compared to bronchiolitis, where they’ll be under three years of age, so there is that little bit of overlap. 01:43 Keep in mind, in children under two years of age, you’ll probably presume this is bronchiolitis and miss a few cases of asthma and that’s okay because steroids are not effective under two years of age and because albuterol does in no way shorten the length of hospitalization or the length of disease. 02:03 In children with asthma, they’re more likely to present with recurrent wheeze. 02:09 These children have come back in over and over again and often their triggers involve more than colds. 02:15 Children with asthma are usually over two years of age and they also might have triggers like cats or dust or cockroach dander, whereas, in children with bronchiolitis, they really have only wheeze with colds and they always have runny nose when they’re wheezing. 02:33 Albuterol usually helps children with asthma get better, so asthmatic children will respond well to albuterol, they’ll feel better immediately afterwards, whereas, in children with bronchiolitis, some do respond a little bit, but most don’t respond at all. 02:48 Keep in mind, there’s a lot of subjectivity to whether they’ve responded to albuterol. 02:53 It’s always better to observe for yourself than to listen to someone’s report. 02:58 Sometimes people will report a response because they really want one to have happened and there wasn’t actually much of a response. 03:07 So you have a patient there and you’re suspecting bronchiolitis. 03:11 What test should you get? Most people don’t like the answer. 03:16 The answer is probably nothing. 03:19 So a CBC or a complete white count does in no way distinguish between viral and bacterial disease. 03:26 This is even true of patients with pneumonia. 03:29 If you have a flagrant pneumonia, a CBC is not a good test to get. 03:34 It does not distinguish between viral and bacterial disease. 03:38 So there’s no rule for a CBC in bronchiolitis, where there really is not likelihood of bacterial disease. 03:46 A chest x-ray is not indicated in bronchiolitis, and you may say, “But wait a second, what if I’m missing a pneumonia?” True, but the problem is, is that the false positive rate of chest x-rays is so high that if you would get chest x-rays in patients with bronchiolitis as a routine phenomenon, you actually drive up antibiotic use without actually benefiting your patients. 04:13 So it causes antibiotic resistance in the community, but it doesn’t actually help anyone. 04:18 In a patient where you suspect pneumonia, a focal consolidation, for example, on auscultation, where you can’t hear any breath sounds at one spot and that’s persisting, of course, you might get an x-ray if they’re going to be hospitalized. 04:32 But in the vast majority of bronchiolitis patients, you should not get a chest x-ray. 04:37 Electrolytes are often gotten in these children, but they are really no better than a good history and physical at determining how dehydrated a patient is. 04:46 We do often admit these children simply for the dehydration as opposed for the respiratory distress.

The lecture Bronchiolitis: Diagnosis by Brian Alverson, MD is from the course Pediatric Pulmonology.

What is the best test to diagnose bronchiolitis?

Which of the following statements is true about the difference between asthma and bronchiolitis?

What is the age of a typical patient presenting with bronchiolitis?