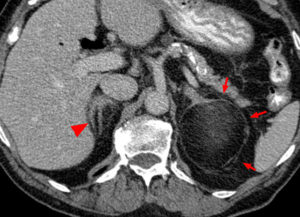 Imaging of the Adrenal Gland Lesions
Several benign or malignant lesions can affect the adrenal glands. These abnormalities include benign adenomas, other benign tumors, malignant tumors, hemorrhage, metastasis and adrenal gland hyperplasia. The finding of an adrenal gland lesion might be incidental in many cases, i.e., an incidental adrenal adenoma on an abdominal computed tomography scan ordered for an unrelated issue. The diagnosis of a mass as an ‘adrenal incidentaloma’ has become increasingly problematic leading to a shift in terminology by radiologists. Thus, modern day adrenal masses are only classified as benign, malignant or indeterminate depending on various features. Most adrenal lesions are benign adenomas. However, malignancy must be ruled out via various imaging modalities such as CT scan, PET scan and MRI.
read more
Load more
Share
Ask Questions
Take Notes
Download Slides
Report Mistake
Comments
show all Show less
My Notes
show all Show less
Learning Material 2
show all Show less
Report mistake
Transcript
0 of 0

00:01 In this lecture we will be discussing common abnormalities of the adrenal glands. 00:05 Let's first review the location and appearance of the adrenal glands on a normal CT. 00:11 So as you recall they are upside down "Y" shaped structures, that are located just anterior and superior to the kidneys. 00:19 You can see them both pointed out here and you can see the kidneys on both sides right here, just as adjacent to the adrenal gland anteriorly is the inferior vena cava and then a portion of the liver on the right. 00:33 So the two most common adrenal abnormalities or an adrenal adenoma which is a lipid field structure and you can see a pathological specimen here. 00:41 It appears very homogeneous and appears to be full of fat. 00:44 Metastases are the second most common abnormality and these as you can see on these pathologic specimens are actually very heterogeneous appearing. 00:53 So adrenal adenomas are usually asymptomatic, they're seen as low-density adrenal masses and they're most commonly an incidentaloma or an incidental finding seen on a CT that's performed for another reason. 01:06 They contain intracytoplasmic lipid and they must be differentiated from a metastasis or pheochromocytoma because the latter two will need treatment while in adrenal adenoma doesn't need any further follow-up or treatment. 01:20 So there are certain specific imaging criteria for adrenal adenomas. 01:23 On a non-contrast-enhanced CT they must measure less than 10 Hounsfield units. If you have an MRI then they have to show significant loss of signal on the out of phase MRI, So if you remember when you compare in phase and out of phase MRI things that contain lipid will lose signal on the out of phase MRI. 01:42 However, you can also have what's called a lipid poor adrenal adenoma. 01:47 So if their lipid poor then they won't meet the above criteria and in this situation you have to perform a multiphasic or adrenal protocol CT. So this is an initial contrast enhanced scan and it's followed by a delayed scan that's performed at about 10 to 15 minutes, and then based on this you can calculate the relative percentage washout from the lesion. 02:07 So this is an example of the formula that we use. 02:10 The information that you would need are the Hounsfield units of the lesion on the enhance study, and the Hounsfield units of the lesion on the delayed study and you can plug these into the formula. 02:19 So the relative percentage washout refers to the amount of contrast that washes out of the lesion on the delayed phase imaging when compared with the enhanced imaging. 02:28 If the RPW is greater than about 40% then the lesion is considered a benign adenoma. 02:33 So let's take a look at this axial CT image. 02:36 You can see that the patient has bilateral masses within the adrenal glands. 02:41 So on this we don't actually have the Hounsfield unit measurements, but just taking a look at this image you can see that the lesions appear low density. 02:50 So if you compare with the density of the liver and you compare with the density of the spleen, the lesions are lower in density, indicating that they likely contain fat. 02:58 So this are actually incidental bilateral adrenal adenomas that we found on this non-contrast CT. 03:03 When we did the Hounsfield unit measurements the right measures zero and the left measures negative five. 03:09 So this fits one of the criteria of a lipid rich adrenal adenoma. 03:12 This patient doesn't need any further treatment or any further follow-up, these are just benign incidental findings. 03:18 So the, an adrenal metastases is the most common malignant mass of the adrenal gland. Metastases can come from the lung, breast, GI tract, melanoma, kidney and thyroid most commonly. 03:35 So adrenal metastases are usually larger than adenomas, their density is most often greater than 10 Hounsfield units. 03:42 Although, occasionally they can present with areas of necrosis that measure lower Hounsfield units. 03:47 The key feature though is that on post contrast imaging they demonstrate very heterogeneous enhancement, rather than the homogeneous enhancement that you would see of an adrenal adenoma. Also, they often demonstrate delayed washout so with an adrenal adenoma, we have greater than 40% washout on the delayed phase imaging, while with an adrenal metastases you wouldn't have that much the washout would be even later than the delayed phase imaging. 04:11 Adrenal metastases usually are T1 hypointense and T2 hyperintense on MRI. 04:19 So these are also best evaluated on a multiphasic or adrenal protocols CT. 04:24 So usually we start off with a non-contrast study, and then we have a standard portal venous phase, and then 10 to 15-minute delayed phase. 04:32 So let's take a look at an example, this is a non-contrast CT image through the level of the adrenal glands, we then have a portal venous phase image, and we have a 10-minute delayed image. 04:45 So a standard adrenal phase CT and you can see on the non-contrast images it appears somewhat hypodense, the lesion then becomes heterogeneous on the portal venous phase and remains equally heterogeneous on the delayed phase. 05:00 So it demonstrated about 33 Hounsfield units on the non-contrast CT, which doesn't qualify for the characteristics of adrenal adenoma. 05:09 On the enhancement phases we have heterogeneous enhancement which persists on the delayed phase imaging. 05:15 So it doesn't meet the criteria for relative percentage washout of an adenoma. 05:19 This was actually biopsied under CT guidance and it was found to be metastatic renal cell carcinoma. 05:26 So in this lecture we've talked about the differences between an adrenal adenoma and adrenal metastases, which are the two most common lesions that are found within the adrenal gland and we've also come up with certain characteristics that will help you differentiate between the two.

The lecture Adrenal Abnormalities by Hetal Verma, MD is from the course Abdominal Radiology. It contains the following chapters:

Which of the following is NOT related to the imaging findings of adrenal metastasis?