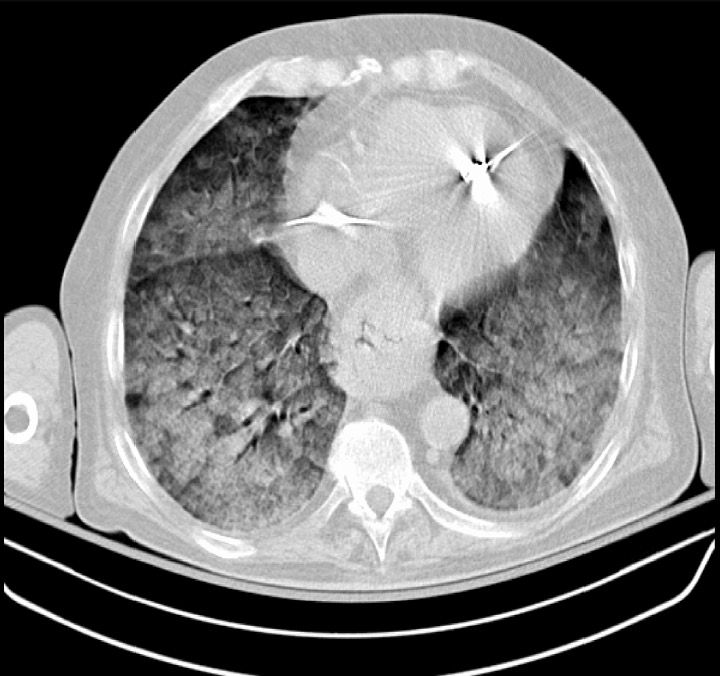 00:00 So ARDS, now this is a disorder of an over activation of the inflammatory response and this occurs for multiple different reasons. 00:09 It was first recognized in Vietnam, where American soldiers with gunshot wounds were developing bilateral infiltrations in their lung and hypoxia. And that was the first time that ARDS was identified, and that's trauma as a cause. But it doesn't have to be a traumatic cause, it could be in any sort of inflammatory problem where it's in the lung or distal to the lung, will cause a systemic inflammatory response. And that affects the lungs directly by through the body's own immune reaction. The cytokines they release, the activation of the neutrophils, the activation of the coagulation cascade leads to bystander damage to the respiratory endothelium and epithelium. And, as a consequence of that, you get leaked fluid into the alveoli, and that's called noncardiac pulmonary oedema, and that causes a rapid fall in the oxygenation level. You also can get proliferation of the epithelial and fibroblast cells, and that, as a complication of ARDS can result in lung fibrosis. 01:19 So what are the causes of ARDS? As we mentioned there are multiple causes, we can divide those into lung causes, pulmonary, direct lung injury leading to ARDS causing more widespread lung injury, or extra-prolonged causes, something happening elsewhere in the body that leads to lung injury, which was otherwise not affected. So the pulmonary cause is mainly pneumonia aspiration but also occurs in environmental problems, if you had a near drowning or smoke inhalation. The extra pulmonary causes, where we mentioned severe trauma, gunshot wounds, road traffic accidents, but also extensive surgery is probably one of the commonest causes of ARDS and any sort of extensive surgery done in hospital could potentially lead to ARDS as a complication. Sepsis outside of the lungs, so septicemia due to a previous surgery or whatever could also lead to ARDS. Acute pancreatitis, drug overdose are also common causes of ARDS. The clinical presentation is basically a rapidly developing, breathlessness and hypoxemia. And the patient remains hypoxic despite receiving high flow oxygen and if you do the X ray, it will show bilateral airspace shadowing as you can see on this chest X ray. Both lungs are affected and it's quite hard to find any part of the lung, which is normal. Importantly, this is oedema of the lungs unexplained by cardiac cause. So the wedge pressure, the pressure of the pulmonary vessels is usually normal So how do we treat ARDS? Well, it's a severe disease and essentially the treatment is intubation and ventilation until the lungs can recover from the inflammatory insult that's occurring and this may be in a few days, but actually often can take weeks. There is, as yet no effective drug therapy for ARDS, although multiple different agents have been tried. And unfortunately, it's often goes hand-in-hand with other severe systemic upset problems such as septic shock and multiorgan failure is common with hypotension, renal failure etc. The overall mortality, perhaps 50% is a bit high, is probably lower than that now with the more effective ventilation mechanisms that we have and it can be complicated, as I've mentioned already by lung fibrosis during the recovery period.

Which of the following is NOT a characteristic finding in a patient with ARDS?

Which of the following cells play a key role in the pathogenesis of ARDS?

Which of the following is the most common extrapulmonary cause of ARDS?

It is very a good job as he able to simplify difficult concepts. I really love the way he explains each points. Thank you so much.

It is very a good job as he able to simplify difficult concepts. I really love the way he explains each points. Thank you so much.