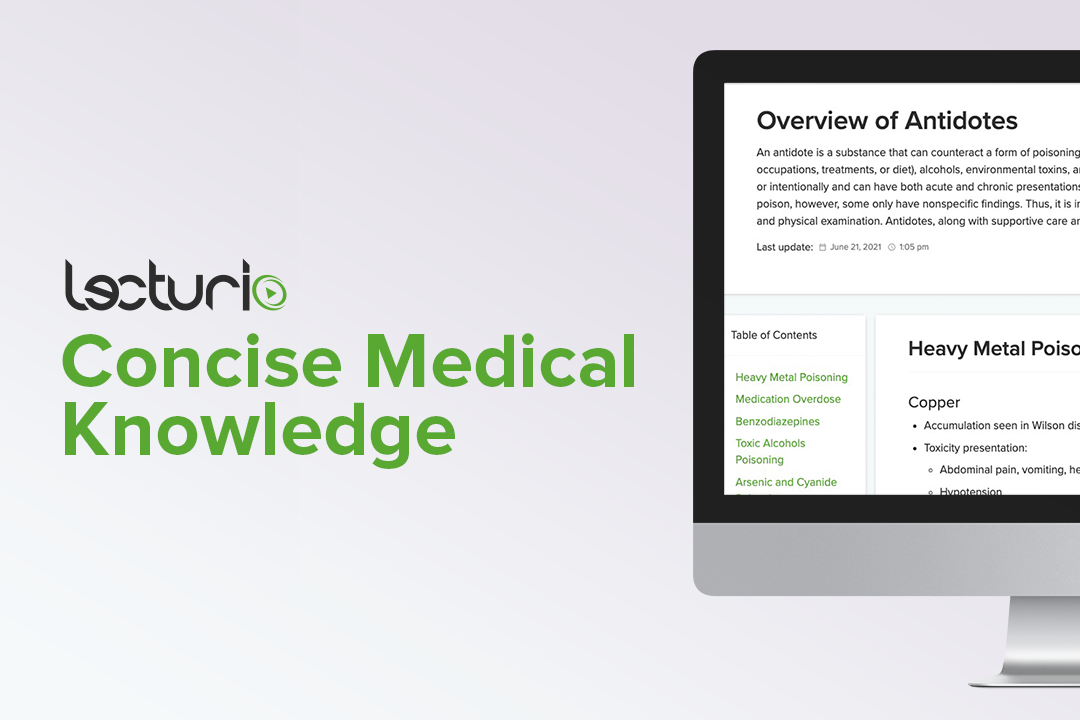 Overview of Antidotes
An antidote is a substance that counteracts poisoning or toxicity. Substances that can cause poisoning include heavy metals (from occupation, treatments, or diet), alcohols, environmental toxins, and medications. An increase in the concentration of these substances to toxic levels can occur accidentally or intentionally, resulting in both acute and chronic presentations. Some substances can be detected using specific laboratory tests, whereas the detection of others relies on nonspecific findings. Thus, it is important to recognize substance poisoning by history, individual risk factors, and physical examination. Antidotes along with supportive care and monitoring are part of the management.
read more

Acetaminophen
Acetaminophen is an over-the-counter nonopioid analgesic and antipyretic medication and the most commonly used analgesic worldwide. Despite the widespread use of acetaminophen, its mechanism of action is not entirely understood. However, acetaminophen is believed to exert its effects through indirect and reversible inhibition of cyclooxygenase (COX)-1 and COX-2. The effects are generally limited to the CNS. Acetaminophen is primarily metabolized by the liver; therefore, an overdose can lead to life-threatening hepatotoxicity. In adults, limiting the total acetaminophen dose (from all sources and routes) to < 4000 mg/day is highly recommended. Contraindications to acetaminophen use include hypersensitivity, severe hepatic impairment, or severe active hepatic disease.
read more 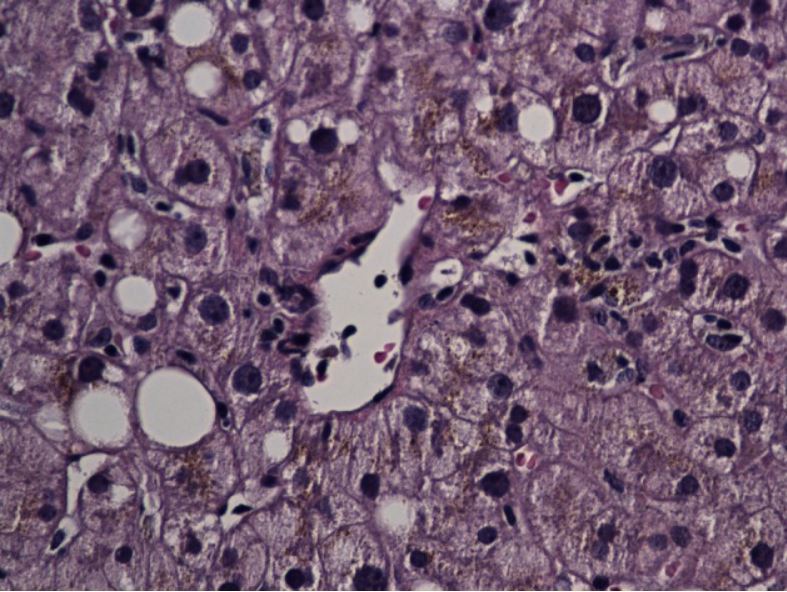 Drug-induced Liver Injury
Drug-induced liver injury (DILI) is the most common cause of acute liver failure (ALF). Hepatotoxic drugs can cause injury to the hepatocytes directly in a predictable dose-dependent way or through idiosyncratic reactions (which may be mediated by immune or non-immune processes). The injury mechanisms can have the following effects: hepatitis, cholestasis, vascular lesions, or overlapping changes. The presentation can be acute or chronic, with severe toxicity manifesting as fulminant liver failure. The diagnosis of DILI requires a thorough history and laboratory tests including liver function tests (LFTs) and drug levels, if available. Management consists of discontinuing the drug, supportive therapy, and monitoring for complications. Acetaminophen, 1 of the most common causes of DILI, has a specific treatment, N-acetylcysteine (NAC).
read more
Load more
Share
Ask Questions
Take Notes
Download Slides
Report Mistake
Comments
show all Show less
My Notes
show all Show less
Learning Material 2
show all Show less
Report mistake
Transcript
0 of 0

00:01 Let’s move on to Tylenol toxicity or acetaminophen toxicity. 00:06 This is incredibly common. 00:08 We see it all the time and we frequently see it in adolescents who are attempting suicide. 00:14 It can also happen as a result of too frequent dosing in young infants who have fever with overly concerned parents. 00:22 So typically, a dose of acetaminophen may be toxic if more than 150 mg per kilo has been given or in young children if they’re getting repeated overdoses. 00:37 Tylenol, when it gets into the body, first burns through the body’s glutathione. 00:42 So glutathione is in our system, in our liver, and it’s allowing the liver to degrade the toxic phenomenon that is acetaminophen. 00:53 Once that glutathione is used up, the acetaminophen then starts causing liver toxicity. 00:59 So we can tolerate small doses, not large doses. 01:03 It typically occurs in patients who have ingested a large dose of medication or infants who are getting small doses or even normal doses at too frequent interval for too long the period of time. 01:18 So patients usually have abdominal pain and nausea when they take too much Tylenol. 01:24 We are going to use nomogram to determine if treatment is indicated. 01:29 So here’s the nomogram, so typically what we do is we draw a level of Tylenol level and we look in the plasma and see what is the Tylenol level. 01:41 We estimate when the most likely time of ingestion was. 01:45 If a patient was alone between again 8 and 11 p.m., we’re going to guess that it was at 8. 01:52 We want to imagine the worst case scenario and then we will draw how many hours out and will plot a point, the level and how many hours out from when they ingested the drug. 02:03 If the dot is above the line, we will treat. 02:07 If the dot is below the line, we will not treat. 02:10 Different nomogram looks slightly different, I would urge you to find one and look online and you can see how we do it. 02:16 The key thing here though is that for an infant who has been ingesting this over a period of time, we can’t use the nomogram. 02:23 This is because the patient over, say, the first day of use was using up their glutathione levels, now an appropriate dose could cause liver toxicity. 02:33 So the nomogram is only for a one time overdose, more consistent with adolescent. 02:40 So if you plot them on a nomogram or in infants' cases, they are just having bumped LFTs and you’re worried about Tylenol toxicity, we’re going to treat them with IV n-acetyl-cysteine. 02:53 N-acetyl-cysteine allows for the degradation of Tylenol without needing the glutathione that the patient doesn’t have anymore. 03:02 So we’re going to treat typically for a full course, it usually lasts around 18 hours and then we will track those Tylenol levels and watch them come down. 03:12 So we will also get liver enzymes typically after day two, because getting them originally at the time of admission to the hospital may lull you into a sense of security. 03:24 Remember, those LFTs don’t typically spike until day two or day three after the ingestion. 03:31 If they are going up, early transferal to a transplant center is critically important because we need to get those patients on a liver transplant list as soon as we can. 03:43 So let’s switch gears again to another type of overdose which is when patients have overdoses related to their anticholinergic receptors. 03:50 So, the cholinergic receptors or the acetylcholine receptors are all through the body and have different responsibilities. 04:02 Typically, we see anticholinergic response to overdoses of very particular medications, but one of them is very common and that’s Benadryl or diphenhydramine. 04:13 Sometimes, we see patients overdose on diphenhydramine because this is commonly what’s in the closet, that would be adolescents or children get into it and overdose. 04:21 We can also see anticholinergic response to patients who overdose on other drugs like tricyclic antidepressants or meds such as glycopyrrolate which are used for some patients for drying out the mucous membranes. 04:38 Okay. 04:39 The muscarinic receptors are responsible for sweating, salivating, intestinal motility, urinary excretion, pupillary constriction and decreased heart rate. 04:50 The nicotinic receptors are responsible for the sympathetic ganglia and the neuromuscular junction and the CNS receptors are responsible for memory, cognition and of course motor coordination. 05:03 So we have to remember that all of these receptors can be affected in an anticholinergic response. 05:10 So there’s a mnemonic for anticholinergic side effects which many of us like to use, we probably seen and heard before which is "blind as a bat." These patients will have dilated pupils, remember it’s anticholinergic. 05:24 "Red as a beet," they will have vasodilation in the skin resulting in erythroderma. 05:29 "Hot as a hare," they will be hypothermic. 05:32 "Dry as a bone," they will have dry mucous membranes especially in the mouth. 05:36 "Mad as a hatter," they will often have mental status changes. 05:40 "Bloated as a toad," they may have urinary retention or intestinal ileus, so their abdominal distension may be there. 05:47 And "the heart runs alone" means they have some tachycardia. 05:51 So if we see that pattern of symptoms, that’s a sign that a patient may have overdosed on something like Benadryl. 05:59 So what do we do for anticholinergic toxicity? Well, again, activated charcoal is important if it’s within an hour of ingestion and if it’s a young patient, who won’t take the charcoal, drop an NG and put it in there for them. 06:14 We can give benzodiazepines for the agitation. 06:17 And in severe cases, we may administer physostigmine which is an anticholinesterase and could boost the acetylcholine present in the neuromuscular junction and in other junctions between nerves.

The lecture Acetaminophen Toxicity in Children by Brian Alverson, MD is from the course Pediatric Emergency Medicine. It contains the following chapters:

Which of the following is an anticholinergic side effect of a drug overdose?

Which of the following is most accurate regarding the decision to treat patients with acetaminophen toxicity?

What is the drug of choice for the treatment of acetaminophen toxicity?