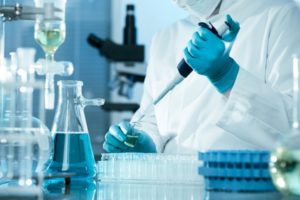 Definition and Function of Enzymes
With the help of catalysts, chemical reactions are accelerated and the entire human metabolism is thereby brought in momentum. Everything about the various biocatalysts and their classification can be found here.
read more
Load more
Share
Ask Questions
Take Notes
Download Slides
Report Mistake
Comments
show all Show less
My Notes
show all Show less
Learning Material 2
show all Show less
Report mistake
Transcript
0 of 0

00:00 Now zymogens come in many forms and synthesizes zymogens for many reasons. 00:06 On the last slide, I showed some of the individual zymogens that are proteases and there are actually quite a few proteases that are synthesized in an inactive form; because, proteases are pretty strong and can cause some big problems. 00:22 But not all of them are, in fact, involved in digestion. 00:26 One group of those it’s very interesting are those that are blood clotting proteins that you can see near the bottom. 00:31 Blood clotting is a process that's controlled by a cascading system like I described and that cascading system starts with a simple action. 00:42 That is then amplify through many steps and that amplification causes ultimately the formation of a clot. 00:49 Well, to make enough proteins sufficient to clot blood and organize them and do that before the person dies of bleeding. 00:59 That takes quick action and that's why that cascading affect that I mentioned is really important. 01:05 Another group of proteins that are synthesized as zymogens in the inactive form are shown on the right. 01:12 And the second of those is also interesting because it's involved in catalyzing the reversal of the process of clotting, that is un-clotting of blood. 01:19 One could imagine the important of managing that because you don't want to start dissolving a clot until the tissue has repaired itself or else you are gonna start the bleeding process again. 01:30 So the synthesis of plasmin in an in active form as plasminogen allows the body to manage when that clot would be dissolved and how it would be dissolved. 01:44 Now there are also chemical modifications that affect enzymatic activity. In some of the other presentations you have seen some of those. 01:51 Those included phosphorylation of the enzymes in glycolysis and acetylation of histones that happened in the chromatin of DNA. 02:00 The other modifications are quite varied and have multiple affects on enzymes and other proteins. 02:08 Some of those affects can activate those and some of those affects can inactive those. 02:11 The very last one is another one I wanna mention about clotting proteins; because, it brings up yet another point about the importance of these changes. 02:20 Now the regulation of the last blood clotting protein is a very interesting one; because, it's chemical modification doesn't change the enzyme from an inactive form to an active form. 02:31 The protein involved in this called prothrombin and though it doesn't sound like it's a zymogen, it is, because it has an older nomenclature. 02:39 Prothrombin is an inactive form of a protease that is necessary to clot blood. 02:46 Now that protease like other proteases has to be a controlled. 02:49 But what you see on the screen happening is not the control of the catalytic activity. 02:55 But the control of where the enzyme will end up. 02:57 So in this case we see the side chain of one of the amino acids of prothrombin known as glutamate. 03:05 In the reaction that you see on the screen, the glutamate gains an extra carbon dioxide and that extra carbon dioxide gives the side chain an interesting property. 03:16 The interesting property is that with the extra carboxyl group it can bind to calcium. 03:22 Now calcium is present more at the side of the wound than it is elsewhere. 03:25 The modification of prothrombin in this way puts this inactive form of the enzyme close to the side of the wound so it can be activated very readily to help the clotting process happen. 03:38 And this is one of the steps in that cascading mechanism that I talked about.

Which of the following is true of prothrombin?

Which of the following modification is not correctly associated with the other part?