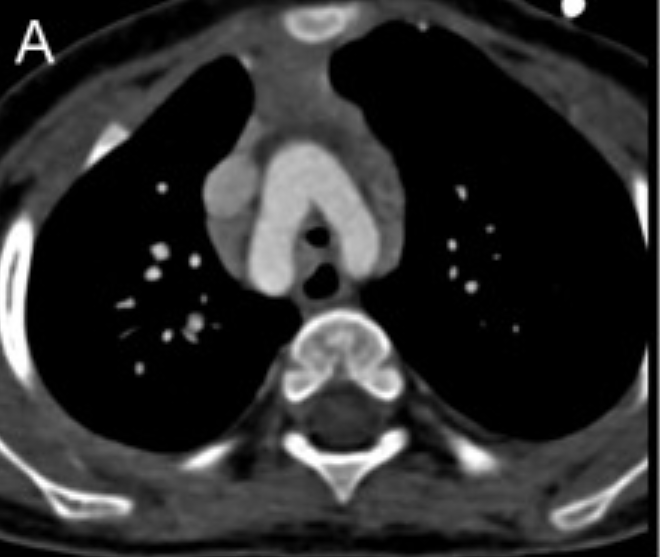 Vascular Rings
Vascular rings are a group of rare malformations featuring congenital abnormalities of the aortic arch. The aberrant arteries often form a ring around the esophagus and trachea, putting pressure on these structures. Clinical symptoms range from stridor, respiratory distress, and/or dysphagia in neonates, to asymptomatic forms, noted incidentally in adults. Diagnosis is confirmed through X-ray and echocardiography, but may be further defined with a computed tomographic (CT) scan. Definitive treatment is surgical, and the prognosis is excellent as clinical recovery is immediate.
read more

Coarctation of the Aorta
Coarctation of the aorta is a narrowing of the aorta between the aortic arch and the iliac bifurcation commonly around the point of insertion of the ductus arteriosus. Coarctation of the aorta is typically congenital and the clinical presentation depends on the age of the patient. Neonates present with heart failure upon the closure of the ductus arteriosus, while children and adults present with hypoperfusion and/or hypertension. Classic findings on physical exam include radio-/brachio-femoral delay and decreased blood pressure in the lower limbs. Diagnosis is confirmed by echocardiogram. Patients should be surgically managed as early as possible to avoid complications of hypertension. Close follow-up is required as the risk of hypertension and re-coarctation remain.
read more
Load more
Share
Ask Questions
Take Notes
Download Slides
Report Mistake
Comments
show all Show less
My Notes
show all Show less
Learning Material 2
show all Show less
Report mistake
Transcript
0 of 0

00:01 Welcome back to Vascular Medicine – Advanced. 00:04 In this segment, we’re going to discuss vascular malformations. Almost all of these are congenital and they’re noticed in early childhood. And indeed very few of these ever come to the attention of an adult cardiologist or an adult cardiac surgeon. They’re almost always taken care of by pediatricians and pediatric surgeons. We’ll go through the various types though for completeness sake. 00:32 We’ll talk about the definition of the various vascular malformations. We’ll talk about the difference between hemangiomas and so-called non-neoplastic – that is non-cancerous – vascular malformations. And we’ll come up with some examples. 00:48 So let’s start with the definition. Vascular malformations are developmental abnormalities of the vascular system. They involve systems that can be shown as dilated capillaries, as dilated venules or as dilated small arteries. And the taxonomy – that is the classification – differs depending upon which blood vessels are involved. 01:16 So here is the overall definitions and categorizations of vascular malformations. 01:25 The most common are, as you see, hemangiomas. These are often seen as we’ll talk in a moment in young children. Often, they’re noticed at birth. And they gradually involute with time, that is they disappear. And they’re totally benign. 01:42 Of the non-neoplastic vascular malformations – that is the non-cancerous ones – there are some that can actually cause quite severe illness. 01:52 One can have an AV malformation. That is an arterial venous connection in the brain that leaks and bleeds and can cause strokes or seizures. 02:02 Another form of these non-neoplastic vascular malformations is a cavernoma, which is a variety of tangled blood vessels that’s fed by the artery and the vein and usually a more discreet lesion. These can also bleed often in the brain and can also cause seizures and strokes. 02:24 One can have a variety of malformations of the aorta in the chest. And we’ll talk about how, in the embryonic development, there can be residual arches that are only seen in embryonic life and usually disappear in most people but are retained in certain people. And then we’ll talk a little bit about port wine stains, which do persist into adult life and are quite commonly seen and can be treated as well if they’re a cosmetic problem. 02:56 So let’s start with the most benign one: the hemangioma. 03:00 They are usually self-involuting. As I’ve said before, that means they go away on their own. They may have a little swelling over them. They may grow for a while in early childhood but then they go away. It occurs because of abnormalities in the endothelial cells that line the blood vessels. And it’s manifested by an increase number of normal or slightly abnormal vessels that are filled with blood and therefore usually, since they occur in the skin, they’re quite visible as you can see from the cartoons here. 03:39 There are a number of different forms of hemangioma depending upon which blood vessels are involved. 03:45 Many of them are just low flow. They don’t actually contain very much blood at a high velocity. They can involve just capillaries. Interestingly they can involve lymphatics. 03:58 We’ll talk a bit about that in the next lecture. Or they can involve veins or arteries. 04:04 The high-flow ones can be more of a clinical problem because there’s a blood shunt which can actually put a minor strain on the heart. But these are often more symptomatic, the combined arteriovenous AVMs. I’ll show you some examples. And those often need to be treated surgically. 04:26 Very rare are combinations of capillaries and hemangiomas, capillary and vein hemangiomas, lymph vein hemangiomas, capillary lymph venous hemangiomas. But these are very rare and usually are not much trouble and also involute. 04:48 So the life cycle usually goes through three phases. And you can see, by the way, the picture to the right: a number of young children with these hemangiomas on their face. 04:59 The first image of them is that they’re seen as an erythematous – that is a red – macular flat patch on the skin. And they often change a little bit, deepening in colour and grow a little faster than the growth of the child. And most are seen by about 12 months of age. 05:19 There’s a plateau phase where there’s no growth lasting between generally 9 to 12 months in most children and then there’s a slow process of involution. And most have disappeared by age 5 to age 9. 05:36 I know my own daughter was born with a little haemangioma on her thigh. And by age 2 or 3 it had disappeared. And that is almost always the course with haemangiomas. They’re very common. They’re very benign. Cosmetically, they are of concern but they almost always go away on their own.

Which of the following statements about hemangioma is NOT true?

Vascular malformations are generally noticed at what time?

Which of the following vascular malformations resolves on its own?