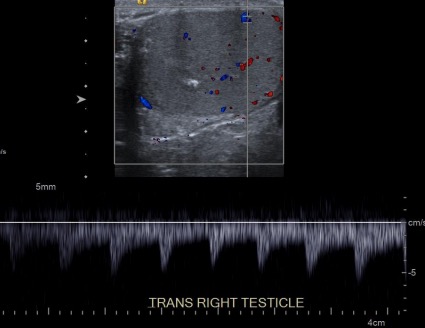 Ultrasound (Sonography)
Ultrasonography is an imaging technique used in medicine for the imaging of subcutaneous body structures, blood vessels, joints, and internal organs to exclude structural pathologies. This technique is based on the utilization of ultrasound (or high-frequency, inaudible sound waves). In medical imaging, the sound waves have a frequency of 2–18 megahertz (MHz). The equipment utilizes a transducer acting as the emitter and receptor of sound waves, and a central computer processes the electrical signals to generate the image. The general advantages of this type of imaging is its low cost, availability, and safety. Some specialties that rely heavily on ultrasound examination are cardiology, nephrology, general surgery, gastroenterology, emergency medicine, and obstetrics.
read more
Load more
Share
Ask Questions
Take Notes
Download Slides
Report Mistake
Comments
show all Show less
My Notes
show all Show less
Learning Material 2
show all Show less
Report mistake
Transcript
0 of 0

00:01 So let's talk a little bit about ultrasound. 00:03 I think it's important to have a good knowledge of the background of the modality before we talk about the essentials of anatomy and pathology. 00:13 So in this lecture we're gonna talk about how ultrasound images are created and we'll learn about the different techniques used for ultrasound imaging and also some of the common uses of ultrasound. 00:23 So ultrasound images are created by the production of a high frequency sound wave using a transducer or a probe which reflects off of the structure that's being evaluated. So the reflection that comes back to the probe is then created into an image. This allows for both real-time or a static evaluation. 00:42 Static images can be captured like a photograph. 00:47 Cine images are video images that can be captured during real-time scanning. 00:51 This is an example of an ultrasound transducer which is also called an ultrasound probe. 00:58 This is placed on the skin surface using a coupling gel that's applied to the skin first and this allows for the best contact between the skin and the probe. 01:06 Probes however can also be transvaginal, transrectal, or transesophageal. 01:11 Transducers produce sounds of many different frequencies and all of them are a lot higher than what humans can hear. 01:19 Higher frequency probes are used for more superficial structures and lower frequency probes are used to penetrate deeper structures. 01:27 So when there's an interface between two different types of tissue, some of the sound is reflected back and some of the sound is transmitted through and this is really the basic concept of ultrasound imaging. 01:38 The amount of sound that's transmitted or reflected really depends on the type of tissue that's encountered. 01:45 Almost all of the sound is transmitted through fluid, however, from bone and gas almost all of the sound is reflected back. 01:54 The reflected sound is encountered by the probe which then sends an electrical signal to the computer which then uses an algorithm and converts that signal into an image and this is what we see on our screens when we evaluate an ultrasound image. 02:10 So there 2 different planes of ultrasound imaging which are standard. 02:16 The sagittal or the longitudinal plane is along the long axis of the body or it's along the long axis of the structure that's being evaluated. 02:24 Transverse is the perpendicular plane and that's perpendicular to the sagittal plane whichever direction that sagittal plane will be in. 02:33 So this is an example of a sagittal orientation of the right kidney. 02:39 So we can see here, this is an outline of the kidney and you can see this kidney in its long dimensions so the hilum will be approximately here. 02:49 On this image, just to orient you a little bit more, this is near the patient's head and this is near the patient's feet. 02:58 And this is typical of a sagittal image. 03:01 On the left side of the image, we have the head and on the right side of the image, we have the feet. 03:08 Up here is anterior so this is the anterior abdominal wall and back here will be the spine. 03:14 Transverse orientation is essentially transverse or perpendicular to the longitudinal plane. So this is kind of a horizontal image of the right kidney so typical for this, this will be the right side of the patient, this will be the left side of the patient, and similar to a sagittal image this is anterior or the abdominal wall and this is posterior where the spine will be. 03:44 This right here is the outline of the kidney and adjacent to it is the liver. 03:51 So let's review ultrasound terminology. 03:55 Every modality in radiology uses different terminology and the terms that are used for ultrasound are echoic because it relates to the sound wave echoes that go back and forth. 04:04 So when something is hyperechoic or echogenic, it reflects many echoes and it appears white on ultrasound. 04:10 This is an example of a structure that is hyperechoic. 04:14 This is located within the left lobe of the thyroid and you can see these multiple, tiny punctate areas that are hyperechoic and they likely represent calcifications. 04:23 Hypoechoic means that it reflects some echoes but not all of them and it appears gray on ultrasound. 04:32 So let's take a look, this is an example of a lesion within the right breast and you can see that the lesion is gray in appearance which means that it is hypoechoic. 04:42 It's not brighter than the surrounding tissue and it's not completely black either. 04:46 It has an in between level of echoes. 04:48 Anechoic mean that reflects no echoes. 04:53 Everything is transmitted through and these structures will appear black on ultrasound. This is an example again of a right breast lesion which represents a cyst and you can see that the inside of this lesion is completely black or anechoic.

The lecture Ultrasound Imaging and Terminology by Hetal Verma, MD is from the course Introduction to Imaging.

A high-frequency ultrasound transducer would best evaluate which of the following body parts?

Which among the following is NOT a feature of the ultrasound probe and the images created?

Which statements regarding transmission and reflection of sound are TRUE?

Which of the following combinations is CORRECT?

Which are the two most commonly used planes for ultrasound imaging?

Dr. Verma is very clear in her explanations. I wish there were more videos on Ultrasound. I would like to learn about parasternal long, parasternal short, subxiphoid imaging of the heart. Thank you!

best explanation
By Abdul Haque A. on 06. July 2017 for Ultrasound Imaging and Terminology

Best explanation, with all basic principles. Way of presentation is very nice.

Dr. Verma is very clear in her explanations. I wish there were more videos on Ultrasound. I would like to learn about parasternal long, parasternal short, subxiphoid imaging of the heart. Thank you!

best explanation
By Abdul Haque A. on 06. July 2017 for Ultrasound Imaging and Terminology

Best explanation, with all basic principles. Way of presentation is very nice.