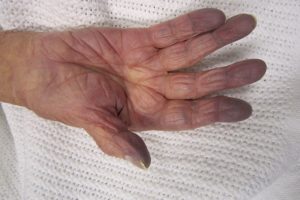 Respiratory Failure: Hypoxemia, Hypercapnia and Hypoxia
The inspiration of oxygen and expiration of carbon dioxide are vital functions of the human body. A decrease in PO2 and increase in PCO2 can alter many normal physiologic processes, and may eventually be fatal. The human body has various reflex mechanisms to manage such changes. Understanding of these reflexes and identification and management of any impairment in them is essential in the management of many respiratory and renal diseases.
read more
Load more
Share
Ask Questions
Take Notes
Download Slides
Report Mistake
Comments
show all Show less
My Notes
show all Show less
Learning Material 2
show all Show less
Report mistake
Transcript
0 of 0

00:00 Now, we also need to think about what is happening at the cellular level. 00:06 So each individual tissue in the body could experience low O2s and we call this hypoxia. 00:14 So tissue hypoxia can occur through many different ways. 00:19 Let’s talk through what the most common are. 00:22 One is it’s not getting enough blood. 00:25 So if cardiac output is low or if tissue perfusion is low, the tissues could become hypoxic. 00:33 Another way that tissues can become hypoxic is if the blood cells themselves aren’t carrying enough O2. 00:40 Such as if a person has anemia or if they have a carbon monoxide poisoning. 00:46 Because remember carbon monoxide binds to the O2 binding sites on hemoglobin with a greater affinity than O2 and thus replaces them. 00:56 So either of those will mean that the blood that gets to the tissues is not bringing as much oxygen with it. 01:03 The final way is a hypoxemia. 01:06 So hypoxemia is a low blood PO2. 01:13 That’s different than hypoxia, which is occurring at the level of the tissue. 01:18 So now let’s talk through the different hypoxia reasons and how the body tries to fix a hypoxia. 01:24 So we have hypoxia and in the kidney, this is sensed and a hypoxia-induced factor is produced. 01:33 What this does is then stimulate erythropoietin known as EPO, synthesize its proteins and it starts to form red blood cells. 01:44 So a hypoxia overtime is sensed by the kidney and it produces a hormone called erythropoietin, which then produces more red blood cells or erythrocytes. 01:56 You may have heard of EPO or erythropoietin before, because this is sometimes a drug that athletes might use to increase the amount of red blood cells such as what happened in some Tour de Frances a number of years back. 02:14 Hypoxemias. 02:16 You need to go through the different types of hypoxemias and there is a way in which you can talk through these to understand which particular one might be prevalent at a certain time. 02:27 So low arterial partial pressures of O2. 02:31 Low PaO2 can be induced by either hypoventilation or a low PIO2 or a low partial pressure of inspired oxygen. 02:44 It could be caused by a diffusional impairment by a right to left shunt or ventilation to perfusion inequality. 02:53 These are all four main mechanisms by which a hypoxemia can occur. 02:59 If we look at our diagram, here, you can see that the blood is going to be oxygenated as it goes through the lungs. 03:07 So where is the low PaO2? That’s in the red portion of the diagram. 03:12 So if you don’t have enough O2 being delivered to peripheral tissues, they will become hypoxic. 03:21 So let’s talk through first hypoventilation or low PIO2. 03:27 So you can decrease PIO2, one of two ways. 03:32 One is you could be in a low barometric pressure environment and that's usually at altitude. 03:37 Another way is if the fraction of O2 is lower in ambient air then you would expect. 03:44 We would expect it to be at 21%. 03:47 But let’s say you were in an enclosed room without very good circulation. 03:51 Eventually the O2 levels could decrease in that area. 03:56 Hypoventilation is another way in which you can create a hypoxemia and this is that you’re not ventilating or bringing enough air into the lungs and therefore, you’re not being able to fully oxygenate your blood.

The lecture Tissue Hypoxia – Causes – Hypoxemia and Hypercapnia by Thad Wilson, PhD is from the course Respiratory Physiology.

A patient comes to you with severely low cardiac output. Which of the following organs will produce hypoxia-inducible factor to overcome tissue hypoxia?

Which of the following hormones is produced in response to hypoxia?