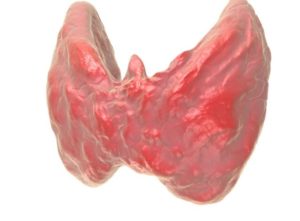 Anatomy of the Thyroid Gland
The thyroid gland is one of the largest and actively functioning endocrine glands. It is a highly vascular, brownish-red gland located in the visceral compartment of the anterior part of the neck, spanning between the C5 and T1 vertebrae.
read more
Load more
Share
Ask Questions
Take Notes
Download Slides
Report Mistake
Comments
show all Show less
My Notes
show all Show less
Learning Material 2
show all Show less
Report mistake
Transcript
0 of 0

00:01 Welcome to this presentation on the neck part II. During this presentation, we’re going to cover three subject areas. We’re going to begin by looking at the thyroid gland. Secondly, we'll visit the stellate ganglion. Then lastly, we’ll visit the thoracic outlet. As we move through each of these three topical areas, we’ll discuss clinical correlations. So here we begin with the thyroid. What I want you to understand here at the beginning is some really basic anatomy. 00:40 First, the thyroid is made up of lobes. Here, we see the right lobe. Next, we have the left lobe. 00:52 Lastly, both lobes are connected by an isthmus. This particular slide shows a very important clinical relationship or anatomic relationship. This is the relationship of the thyroid gland to the recurrent laryngeal nerves. Each laryngeal nerve here is the right recurrent laryngeal nerve. 01:22 It’s lying within the tracheoesophageal groove. We see that groove between the trachea and the esophagus which lies posteriorly. We also see the same relationship. However, it’s unlabelled on the opposite side. So here is your left recurrent laryngeal nerve. Again, it travels in the tracheoesophageal groove on that particular slide. Clinically, these are important during a thyroidectomy. The surgeon has to carefully identify these nerves and preserve them so they are not injured during the removal of the thyroid gland. We’ll also demonstrate another clinical correlation of the recurrence when we talk about thyroid goiter. Here are some important aspects about the recurrent laryngeal nerves. Both recurrent laryngeal nerves are branches of the vagus nerve. They will supply all the intrinsic laryngeal muscles with the exception of the cricothyroid. They are called recurrent as they come off the vagus nerve and then travel back upwards to either side of the trachea and ultimately, to their destination of the larynx. The left and right recurrent laryngeal nerves do have some anatomic relationship. The difference is the left recurrent laryngeal nerve loops around the aortic arch in the vicinity of the ligamentum arteriosum, whereas the right recurrent laryngeal nerve loops more superiorly on the right side and loops under the right subclavian artery. Here is an important clinical correlation. Here we’re looking at goiter. This particular individual has a very enlarged thyroid gland, very large mass that’s very visible. In this particular individual, there are multiple enlarged nodules. So this particular form of goiter is multinodular. Some of the symptoms that are associated with a goiter are as follows: one is coughing. This has a mass effect on the respiratory passageways and the larynx. Second symptom is hoarseness. Very large goiters can involve the recurrent laryngeal nerves and if they become involved, then they’re unable to effectively activate the muscles of the larynx and can then create the hoarseness. 04:42 Another symptom that can be associated with goiter is a difficulty swallowing, dysphagia. 04:49 This would be due to a mass effect, so the mass is compressing the structures that convey the bolus of food. Then lastly, again due to a mass effect, you can have compression of your respiratory passageways in the area of the trachea and making that a problem for some patients. 05:12 A very common procedure to demonstrate whether or not nodules are functional nodules or non-functional nodules is to utilize technetium-99m pertechnetate scan. We see here in the image the results of such a scan. Hot nodules are going to show up in this kind of coloration that we see here. This is due to the presence of functional thyroid nodules. 05:49 They’re taking up the technetium-99m. So these areas light up when you have a hot nodule region. A cold nodule is not a functional nodule so these types of nodules will not pick up the technetium. This area here represents a cold nodule in the scan. So here, we are demonstrating more specifically some of the aspects of a cold nodule. Again, it’s this area here, non-functional. These are usually benign. Then lastly, the odds of being malignant are going to be greater than the hot nodules. Here we’re looking at the thyroid gland with respect to a clinical procedure, its removal, a thyroidectomy. Some of the indications for a thyroidectomy are what we just went through, for example a goiter. Cancer of the thyroid gland would also be another indication for its removal and then lastly, persistent hyperthyroidism. Some complications associated with a thyroidectomy include bleeding from the vasculature, either arterial bleeding or venous bleeding. Infection is always a concern in any surgical procedure. As we discussed not too long ago, hoarseness of the voice can occur if there’s surgical injury to one of the recurrent laryngeal nerves. So again, it’s very important to isolate them and protect them during a thyroidectomy. The last complication to highlight for your information is that some patients can have hypoparathyroidism. This is due to not being able to adequately identify the parathyroid glands before the removal of the thyroid. 08:29 As a result, the parathyroids are also removed. Then you do not have enough functional parathyroid tissue remaining for them to carry out their function.

The lecture Thyroid Gland – Neck by Craig Canby, PhD is from the course Head and Neck Anatomy. It contains the following chapters:

Which of the following groups of muscles is supplied by the recurrent laryngeal nerve?

What is the anatomical location of the thyroid isthmus?

During a thyroidectomy, which of the following structures has to be assessed for its presence in the tracheoesophageal groove?

Which of the following is NOT a characteristic of cold nodules in the thyroid gland?

Which of the following complications results from unilateral damage to the recurrent laryngeal nerve during thyroidectomy ?

i like the videos very much because of the clear presentations

Excellent thank you. Thank you Dr. Craig, this video is very helpful.

I think is very useful and everyone can understand the information... Great!

i like the videos very much because of the clear presentations

Excellent thank you. Thank you Dr. Craig, this video is very helpful.

I think is very useful and everyone can understand the information... Great!

Very good topic with a nice concept
By Dvsvb R. on 30. December 2018 for Thyroid Gland – Neck

A realistic approach for educate all medical professionals . Acurate and elabotate , made it suitable for medical needs

Short and informative
By Bashar G. on 23. October 2018 for Thyroid Gland – Neck

Thank you very much, that was clear and to the point

Thank you Dr. Craig, this video is very helpful! I learned everything necessary that I need and I'm glad...

I found this very helpful. I don't mind if it's just a general review because if you cover them all it would take a long time. I can read books for more in-depth analysis. Great job !

Good pace, but information relating to the thyroid gland is lacking. This is more of a general overview.

introduction to thyroid
By Tara B. on 06. April 2017 for Thyroid Gland – Neck

it is extremely general and does not provide the important notes about the gland like its blood suplly, innervation and details about what could be damaged if a thyrodectomy was preformed wrongly.