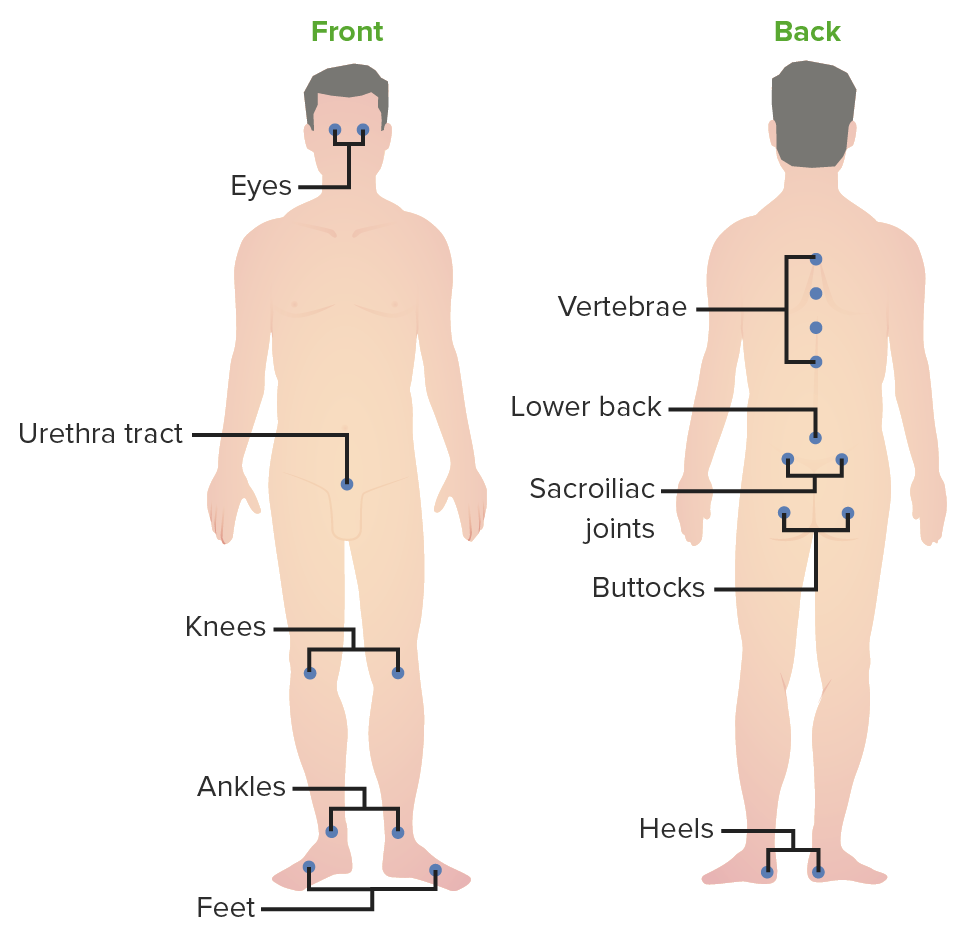 Reactive Arthritis
Reactive arthritis is a seronegative autoimmune spondyloarthropathy that occurs in response to a previous gastrointestinal (GI) or genitourinary (GU) infection. The pathophysiology of this disease is unclear, but a significant proportion of affected patients are positive for HLA-B27. The disease manifests as asymmetric oligoarthritis (particularly of large joints in the lower extremities), enthesopathy, dactylitis, and/or sacroiliitis. Ocular, mucocutaneous, GI, GU, and cardiac manifestations may also occur. The diagnosis is clinical, and efforts should be made to rule out alternative diagnoses. Management focuses on controlling symptoms, typically with nonsteroidal anti-inflammatory drugs. An active infection should also be treated, particularly Chlamydia trachomatis.
read more
Load more
Share
Ask Questions
Take Notes
Download Slides
Report Mistake
Comments
show all Show less
My Notes
show all Show less
Learning Material 2
show all Show less
Report mistake
Transcript
0 of 0

00:01 In this brief lecture, we’re going to discuss the swollen joint in children and then particularly the swollen joint where it is essentially a transient autoimmune condition. This would be either reactive arthritis or transient synovitis. This is an important lecture because these two entities appear quite commonly in children but they’re basically benign conditions. I’m going to go through them and explain the differences between them now. Reactive arthritis, at one point was also called Reiter syndrome, is an autoimmune attack on a joint typically after an infection and usually it’s more common in GU or GI infections. 00:47 The classic GU infection that can result in a reactive arthritis is chlamydia. In adolescents with chlamydia, they can, after the infection starts, then later develop an autoimmune attack on their joints. From a GI standpoint, there are some bugs that are implicated more likely in an autoimmune attack or a reactive arthritis. 01:11 These include Yersinia enterocolitica, Salmonella enteritis, Shigella, and Campylobacter, in other words, the bacteria or pathogens other than E. coli that are most likely to cause this problem. There’s also group A strep which perhaps we will consider as a different issue. Group A strep reactive arthritis is a part of rheumatic fever. We’ll discuss rheumatic fever in another lecture. Reactive arthritis typically is reactive. That means, first you have the infection, you make the antibodies against that bug and those antibodies through freakish occurrence also attack your joints later on down the line. 01:57 This usually happens one to four weeks after the first infection. It has acute onset and it may be migratory involving multiple joints. There’s a classic phrase for chlamydia: can’t see, can’t pee, can’t climb a tree. 02:14 What that is basically pointing out is these patients can get eye involvement. Can’t pee means they’re having the urethritis of chlamydia. Can’t climb a tree means their knees are swollen. That’s a classic thing for what we previously called Reiter syndrome but now we’re just calling reactive arthritis. 02:32 For reactive arthritis, the diagnosis is really usually made clinically. If there’s still something there, you could test for the causative disease. For example, certainly with chlamydia, a urine chlamydia test is positive. 02:47 Unless that patient’s been treated, that test will continue to be positive. In fact, it will be positive in a substantial number of cases where they have been treated and they might need to be treated again. 02:59 But in patients who’ve just had, say, Campylobacter, the Campylobacter is long gone usually by the time they’re developing the reactive arthritis, so testing isn’t possible. Most of the time, we don’t bother with testing. Up to 80% of patients who have reactive arthritis are HLA-B27. But knowing someone is HLA-B27 probably isn’t particularly beneficial. If they were to go on to develop, say, ankylosing spondylitis, we would be testing them anyway. So, it’s unclear that knowing their HLA type is particularly helpful. 03:38 We do like to rule out other potential causes that are more significant than reactive arthritis. For example, through history and physical exam, we can probably rule out lupus or an infected joint or the other things that are more significant and require more aggressive therapy. Reactive arthritis is managed typically through containing the inflammation. The good news is these children usually get better reasonably well and have a great prognosis. We usually start off with treating with NSAIDS. That’s the most important therapy and the standard of care. We often will use long-acting NSAIDS like twice a day naproxen or even once a day meloxicam as a way of controlling their inflammation without having to take medicines every six hours like you would with ibuprofen. The goal is to sustain the inflammation as much as it is to control the pain. Injected steroids can absolutely be done either systemically or intraarticularly if this is a very severe reactive arthritis. If there were multiple joints involved, I might go with the systemic steroids first. Children with rheumatic fever will go on to penicillin prophylaxis. 04:51 But we’ll discuss that more in the rheumatic fever lecture. Let’s switch gears now and talk about a disease which is very similar to reactive arthritis but is distinguishable because it happens during or just immediately after the infection as opposed to one or four weeks later. That is the key point that you should remember; high impact on the test. Reactive arthritis has one to four weeks after an infection. Transient synovitis happens either during or just after the infection. Also, the infection is usually in transient synovitis a viral syndrome. It’s usually an upper respiratory infection or URI. 05:36 Typically, the age of a child who is having transient synovitis is between two and twelve years of age. 05:42 Typically, this will affect one, maybe two joints and usually the hip is first choice then the knee then something else. This is usually monoarticular inflammation. It’s usually a child showing up with a swollen knee and that’s it, and oh yes, they had a cold yesterday. The problem is usually mild. 06:04 They may not be able to bear weight but will transiently be sick but then often be better in only one or two days. It may be completely resolved in three to four days. Because this is such a short-lived phenomenon, we usually just treat with NSAIDS. We may do a couple of days of naproxen or ibuprofen as needed. Remember, transient synovitis is transient. It’s an inflammation of the joint. It’s during the virus. This is incredibly common. It’s impossible to practise for a year as a pediatrician without seeing a case. That’s my summary of these two conditions. 06:45 Thanks for your attention.

The lecture Swollen Joint in Children: Reactive Arthritis & Transient Synovitis (TS) by Brian Alverson, MD is from the course Pediatric Rheumatology and Orthopedics. It contains the following chapters:

Which of the following pathogens is NOT a typical trigger for reactive arthritis?

Which of the following statements regarding reactive arthritis is FALSE?

A 12-year-old boy is brought by his parents to the pediatrician, stating that their child has been complaining of swollen joints, watery eyes, and a burning sensation when urinating. Upon further questioning, the parents note that their child had an episode of diarrhea due to Salmonella 2 weeks earlier. You suspect reactive arthritis. Which of the following is the MOST IMPORTANT initial therapy for this boy?

Great lecture. It's very useful for the differential diagnosis. Very clear differences between the two conditions.

Great lecture. It's very useful for the differential diagnosis. Very clear differences between the two conditions.