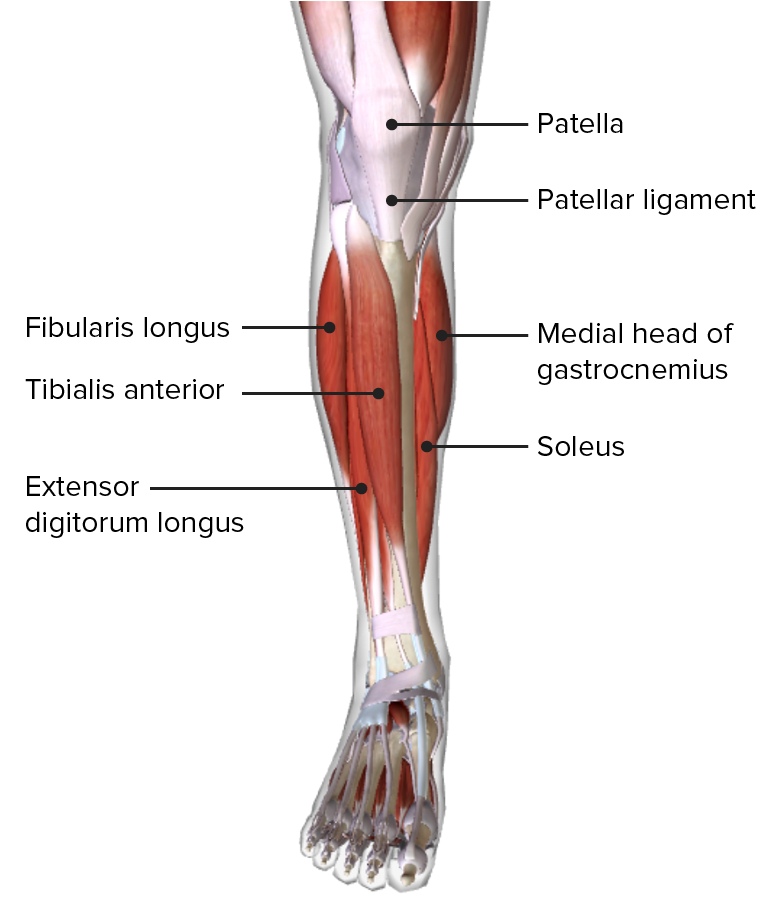 Leg
The lower leg, or just “leg” in anatomical terms, is the part of the lower limb between the knee and the ankle joint. The bony structure is composed of the tibia and fibula bones, which articulate with each other at the proximal and distal tibiofibular joints. The muscles of the leg are grouped into the anterior, lateral, and posterior compartments by extensions of fascia and exert their action on the ankle, foot, and toes.
read more 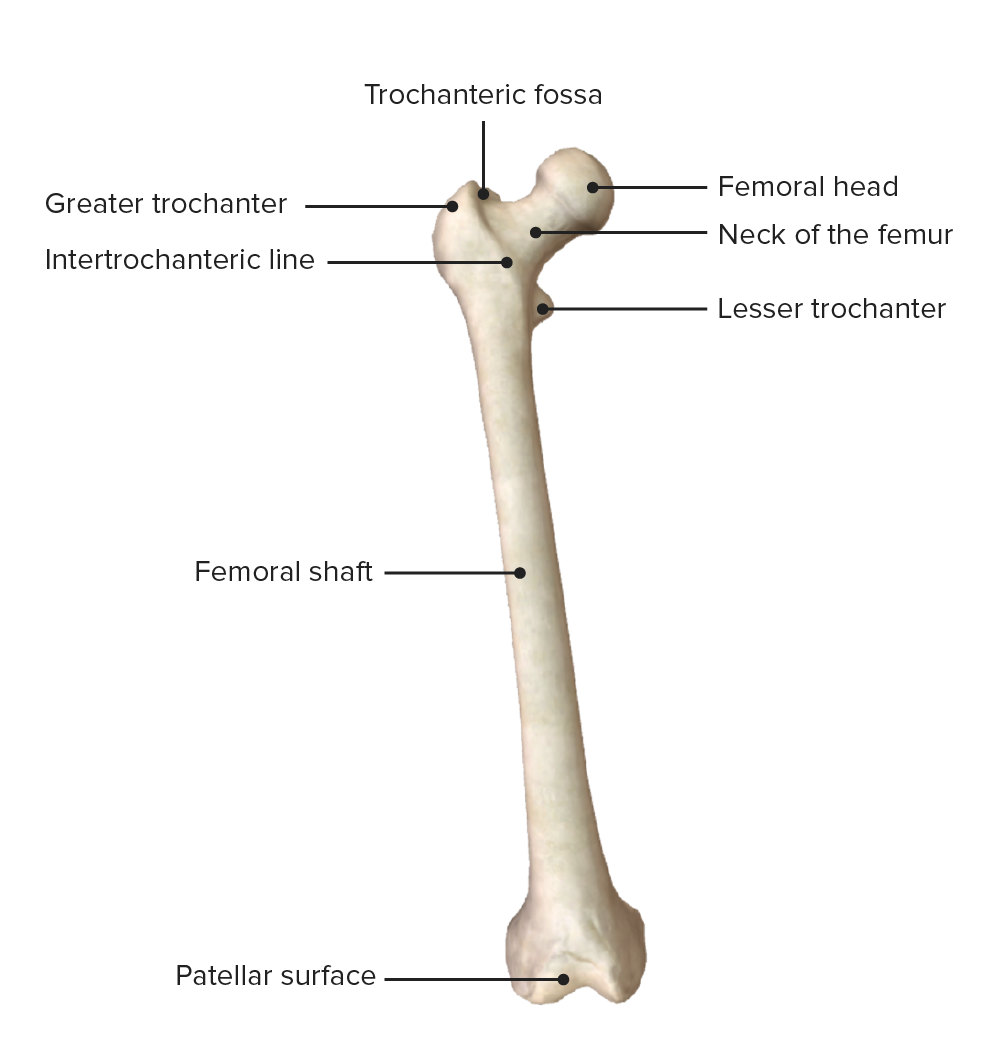 Thigh
The thigh is the region of the lower limb found between the hip and the knee joint. There is a single bone in the thigh called the femur, which is surrounded by large muscles grouped into 3 fascial compartments. The thigh is supplied primarily by the femoral artery and its branches, drained by deep and superficial venous networks, and innervated by branches of the lumbar and sacral plexuses.
read more
Load more
Share
Ask Questions
Take Notes
Download Slides
Report Mistake
Comments
show all Show less
My Notes
show all Show less
Learning Material 2
show all Show less
Report mistake
Transcript
0 of 0

00:01 In this lecture, we’re going to look at the surface anatomy and osteology of the lower limb, which will set you up to the remaining lectures in this part of the course which covers lower limb anatomy. So we’re going to, first of all, start with the surface anatomy and look at the various regions of the lower limb, the gluteal, thigh, leg, and foot. 00:23 And then we’re going to look at the bones that make up the lower limb. 00:27 We’ll look at the hip bone, the ischium, pubis, and ilium and then we’ll look at the femur, the tibia, fibula, the tarsal bones, the metatarsals, and phalanges. 00:38 We’ll look at a numerous bony landmarks on each of these individual bones and then we’ll consider some movements that are possible with the lower limb. So you should be familiar with the general body plan that we have and previously, we looked at the bones and the muscles that form the upper limb or the superior appendicular skeleton. And now, we’re really associated with the lower limb which we can see here. We’ve got the lower limb forming by the thigh and the leg which we’ll talk about. But what we can see on the screen here are some surface features of the lower limb, the inferior appendicular skeleton. So we have the anterior surface here and we have the posterior surface here. So we can see the inferior appendicular skeleton forms the lower limb, and it is specialized for locomotion, for movement. 01:34 It’s also specialized to maintain balance, maintaining posture, and supporting the body’s weight. 01:41 Unlike the upper limb, it contains a number of specialized joints. It is attached to the axial skeleton via the pelvic girdle. And we can see on the screen on this anterior and posterior view, we can see we have the gluteal region. This is really only observed on the posterior aspect here. We can imagine where the sacrum would be and we have the gluteal fold separating the inferior aspect of the gluteal region from the posterior aspect of the thigh. 02:12 And here, we have a small little protrusion which is the greater trochanter. You can see that on the posterior surface here laterally, and also laterally, here on this anterior surface. 02:24 And this is where we have the anterior region of the thigh. We can see sartorius muscle will be passing down in this direction, and we can see it’s originating from the anterior superior iliac spine. We can see the inguinal ligament is passing down towards the pubic tubercle. We can see we’ve got the impression of the knee and the patella anteriorly in this lower limb, and we can see where we have the head of the fibula and the tibial tuberosity. 02:52 We can also see the fibula head protruding laterally on this posterior view. 02:58 We can see the bulk of muscle on the posterior leg formed by gastrocnemius and we can also appreciate a very sharp anterior border of the tibia. And then we pass down into the foot. 03:11 We go past both the medial and the lateral malleolus which can be palpated. And then we move on to the dorsum of the foot, and underneath, we have the sole. So some regions and some key surface landmarks. Now, the axial skeleton, remember, is what supports the body, the core of the body. And attached to the axial skeleton, we have the appendicular skeleton, the superior appendicular skeleton being for the upper limb, and the inferior appendicular skeleton being for the lower limb. We can see on the skeleton here the inferior appendicular skeleton. 03:49 We have the femur, which articulates with the hip bone via the head of the femur. 03:53 And we can see this is deviated medially towards the midline. So we have this obliquely running long bone, the femur. We can see it articulates the knee joints with the tibia, which is orientated vertically. And we have this running down towards the ankle joint. Running anterior to the femur, we have the patella which we can see here and running lateral to the tibia, we have the fibula. The fibula isn’t necessarily involved in weight bearing, but the fibula alongside the interosseous membrane joining the two bones offers a large surface area for muscle attachments. We then have a whole series of tarsal bones. These are analogous to the carpal bones in the wrist. And then we have metatarsals just like we had metacarpals. Then finally, the digits of the foot are formed by the phalanges. So let’s move on to looking at some of the

From which structure does the sartorius muscle originate?