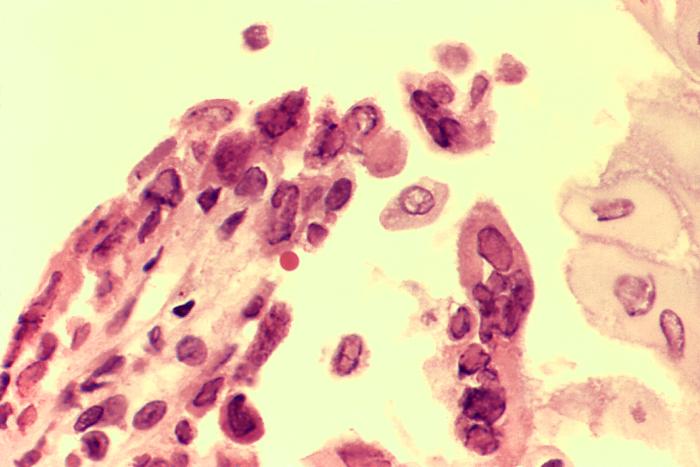 Herpes Simplex Virus 1 & 2
Herpes simplex virus (HSV) is a double-stranded DNA virus belonging to the family Herpesviridae. Herpes simplex virus commonly causes recurrent infections involving the skin and mucosal surfaces, including the mouth, lips, eyes, and genitals. Typical mucocutaneous infections are characterized by an acute localized appearance of clusters of small, painful vesicles on an erythematous base. Although overlap exists, HSV-1 is classically associated with oropharyngeal lesions, whereas HSV-2 is mostly responsible for genital herpes, an STI. Systemic and severe infections including encephalitis, meningitis, and neonatal herpes may also occur. The diagnosis is made based on clinical presentation and history, which can be confirmed by the microscopic examination of a stained smear of a fresh vesicle, nucleic amplification test using PCR, direct immunofluorescence, or serologic tests. The therapy for mucocutaneous lesions is usually symptomatic, but antiviral therapies involving acyclovir, valacyclovir, or famciclovir are useful if given early, and are always part of the therapy for serious systemic infections.
read more 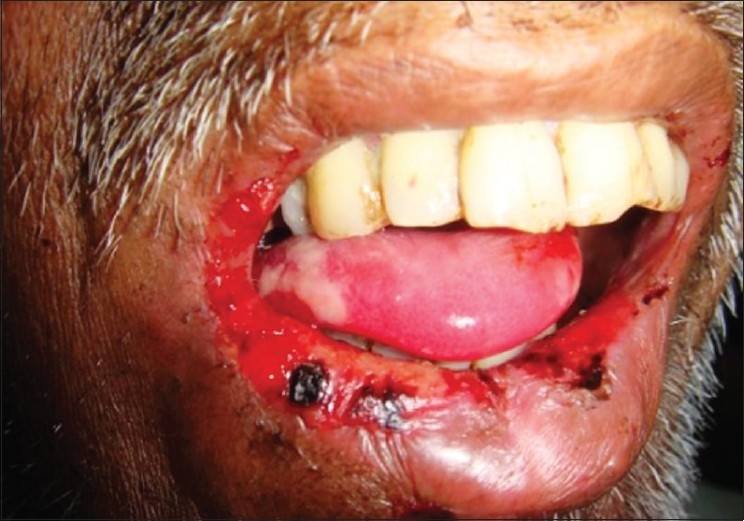 Stomatitis
Stomatitis is a general term referring to inflammation of the mucous membranes of the mouth, which may include sores. Stomatitis can be caused by infections, autoimmune disorders, allergic reactions, or exposure to irritants. The typical presentation may be either solitary or a group of painful oral lesions. The etiology of the lesion is diagnosed based on appearance and associated symptoms. Treatment involves symptomatic relief, but infectious causes may require antivirals/antibiotics and autoimmune etiologies may require steroid therapy.
read more
Load more
Share
Ask Questions
Take Notes
Download Slides
Report Mistake
Comments
show all Show less
My Notes
show all Show less
Learning Material 2
show all Show less
Report mistake
Transcript
0 of 0

00:00 In this lecture, we're going to discuss Infections of the Upper Airway in children and specifically we'll drill down on a few key examples of common infections that children can have in the upper airway. Let's start with the most anterior one which is stomatitis. We see this a lot. This is generally an infection of the mouth and most commonly is caused by the HSV virus. Remember, HSV is ubiquitous in the population. 95% of us have had HSV of the anterior mouth. The first time you get it, it can be particularly severe because you haven't already made antibodies that can fight off the virus as it recurs and regenerates out of your nerves. So, that first infection can be severe and the children won't want to eat rather than dehydrated and at risk for dehydration and not drinking and so we sometimes have to admit them for care. It can also be caused by Coxsackie, which as we know, causes hand, foot and mouth disease and in particular the mouth can be involved although usually Coxsackie virus lesions are more posterior and the HSV virus lesions are more anterior. Very rarely, it can be a fungal disease such as severe oral candidiasis Typically we might be worried about the immune system and in particular the T-cell function in these patients. So, we also see stomatitis in particular clinical situations. In the United States it's less common but it is known to happen in patients with Kwashiorkor, it may happen with chemotherapy, it can happen in older children with autoimmune disease such as lupus or Behcet's disease is very common. Patients may have Stevens-Johnson syndrome. Remember, that can involve 2 areas of mucous membrane such as this patient who has eye and mouth involvement and may happen in certain immune deficiencies. So with stomatitis, key is pain management. We have to give them pain management that can allow them to drink so that they can maintain their hydration. 02:07 In older children, we can use "magic mouthwash" which is a topical numbing medicine with a little bit of topical lidocaine in it. In younger kids, we may require morphine or ibuprofen and other therapies along those lines. In general, if a child can't drink they may require IV hydration. 02:26 If you suspect this is HSV, acyclovir may be a little bit beneficial if it's given very early. So within 48 hours of onset of symptoms, acyclovir may shorten the course of all these by a day or so. Again, we'll treat them with that "magic mouthwash" which is an equal mix of viscous lidocaine, Maalox and Benadryl. They shouldn't swallow it, they should spit it out. We don't want to do ingest too much Lidocaine. That can cause arrhythmias. We may use rectal ibuprofen or Tylenol. 02:59 This is a neat trick. We can take liquid ibuprofen and Tylenol and squirt it into the rectum because they won't want to be swallowing pain medicines. That can be very effective. An interesting clinical pearl is that rectal ibuprofen bypasses the liver because of the inferior rectal veins they drain systemically so there may be a little bit benefit for rectal ibuprofen and often will give oral opiates or IV opiates if they really won't take anything at all. Remember, titrate opiates carefully in children. We don't want to make them too somnolent or have problems with their airway and breathing.

The lecture Infections of the Upper Pediatric Airway: Stomatitis (Oral Mucositis) by Brian Alverson, MD is from the course Pediatric Infectious Diseases. It contains the following chapters:

Which of the following is the most common cause of viral stomatitis in children?

Which of the following is NOT commonly used to treat stomatitis?

(1) 5,0 of 5 stars
Excellent lecture
By Jalil Z. on 28. July 2020 for Infections of the Upper Pediatric Airway: Stomatitis (Oral Mucositis)

(1) 5,0 of 5 stars
Excellent lecture
By Jalil Z. on 28. July 2020 for Infections of the Upper Pediatric Airway: Stomatitis (Oral Mucositis)