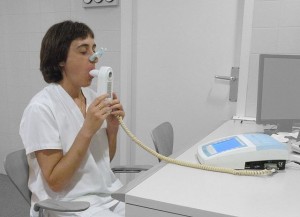 Pulmonary Function Tests (PFT)
Pulmonary function tests (PFT) are a battery of tests that measure lung function and aid in the management of patients with respiratory disease. They are performed using standardized equipment and can be used for diagnosis, prognostication, management and follow-up of patients with pulmonary pathology. Although PFT may not identify the exact pathology, it broadly classifies respiratory disorders as either obstructive or restrictive. In this article, the role of PFT in the measurement of lung mechanics and diagnosis of various diseases will be discussed in detail.
read more
Load more
Share
Ask Questions
Take Notes
Download Slides
Report Mistake
Comments
show all Show less
My Notes
show all Show less
Learning Material 2
show all Show less
Report mistake
Transcript
0 of 0

00:01 Spirometry, what the patient doing? Takes a deep breath and then begins breathing out. 00:05 That breath which is then coming out at one second is known as FEV1 and the forced vital capacity is the air that you are getting out without being timed. The ratio here of FEV1 over FVC ratio should be approximately 0.8. Now, if there is obstructive, what does that mean to you? Difficulty with getting air out, then you can only imagine which one of these parameters of the ratio has been affected severely. It’s your FEV1. Your FEV1, the amount of air that you are able to get at one second is severely obstructed. So therefore, you expect your ratio to decrease and that would give you something dramatically less than 0, 0.7. You are on the side of getting less, may be 0, 0.25. Without a doubt, your diagnosis, obstructive category. Your next step after you put yourself into obstructive category is to figure out which of the four. Is it emphysema? Is it chronic bronchitis? Is it bronchiectasis? Or is it asthma? And that part becomes fun. 01:14 Restrictive. What does this mean? Well, let me put this out here. Please understand that with any type of lung disease, your FVC is going to be decreased. "But, Dr. Raj, you just said that the ratio is decreased with obstructive." Exactly, that is true. But your FVC is decreased, but who is decreased even more so? There you go. Your FEV1. That is the quantitative dramatic decrease that truly decreases the ratio. I don’t care what kind of lung disease, your FVC is always going to be decreased. Then what is it that determines the ratio? The FEV1. Do not get your vital capacity confused with functional residual capacity. Is that clear? Functional residual capacity is this, at control. Let me demonstrate. Well, actually I cannot, I will kill myself. I will sacrifice myself for medicine, but I am not ready to completely give myself up. But anyhow, point is, theoretically, FRC is your epiglottis open with absolutely no air moving in and out. I could try, but I think I would just look really bizarre. So, that is your theoretical FRC, ground zero. And do not get your FRC confused with FVC. And in any lung disease, FVC will be decreased. 02:38 In obstructive, what is my FRC? Increased. Good. What about restrictive? What is my FRC? Decreased. I hope that is clear before moving on. If not, make sure you know your definition for some of these capacities that we have been talking about. Now, restriction is suggested by low FVC. Okay, fine. So, why is it that the ratio is either normal or perhaps even increased in restrictive? Because the FVC might be decreased, but FEV1 is definitely not as decreased as what we found in obstructive. So if that's the case, then please understand as that, well, you have a higher FEV1 number. You can actually have PFT, pulmonary function test, and its percentage being greater than 80%. So, I can say this to you factually that you will never, in restrictive lung disease, have a decreased ratio. I can tell you factually, that are both obstructive and restrictive will have a decrease in FVC. Is that clear? So, restriction is suggested by low FVC, but needs lung volumes testing to confirm because the residual volume is not measured by spirometry. So, confirmation comes from the fact that, well, you need to see as to whether or not residual volume or you tell me. Do you think residual volume is increased or decreased if we are dealing with restrictive? Give yourself one big example. A fibrosed lung. That is a lung that is absolutely non-compliant. It is very stiff. You can expect total lung capacity and you can expect your residual volume to be decreased in restrictive. Clear? For example, spirometry may show the findings of obstructive, but the decreased vital capacity. 04:32 This could mean two possible clinical outcomes. What does that mean? For example, let’s do scenario A. CO, stop there, obstructive. What does this mean to you? You know that you have a severe decreased in FEV1. Your FVC is decreased, overall the ratio is decreased. 04:52 You know that the TLC is increased and you know that your residual volume is increased. 04:58 Now, COPD patient experiencing super imposed restrictive, stop there. Is that common? Yeah, it is. So, COPD experiencing superimposed restrictive disease, in which case the lung volume, the TLC, will also be decreased. Amazing, huh? So now, you have patient with spirometry that is now shown to have a decreased FEV1 to FVC ratio. But then all of a sudden, guess what? You need to further diagnose. Now that you start seeing your lung volumes and TLC being decreased, chances are pretty good that your patient with an obstructive disease had a superimposed restrictive. Fascinating, isn’t it? Exacerbations are always taking place. Do not forget that. 05:41 What about scenario B? A COPD patient experiencing decreased VC. Okay, we know that. Due to hyperinflated lung trapping, without a superimposed restrictive condition. Therefore, what happens? Ah, confirmation by an increase in lung volume of TLC. So, priority number 1, confirm obstructive. 06:07 You got yourself a decreased ratio. Fantastic! Well, you never know. There could be super imposement of restrictive disease, hence the lung volumes. In your particular case, may be you only need to go as far as obstructive. However, be careful, because you are going through answer choices and you do find restrictive disease, see to make sure that the lung volumes correlate with your initial diagnosis.

Which of the following would be suggested by an FEV1/FVC ratio of less than 0.7?

What does a low FVC suggest?

A patient with COPD has noted improvement in their condition. Their FVC has decreased. Which of the following better explains this scenario?

Which of the following is NOT measured by spirometry?