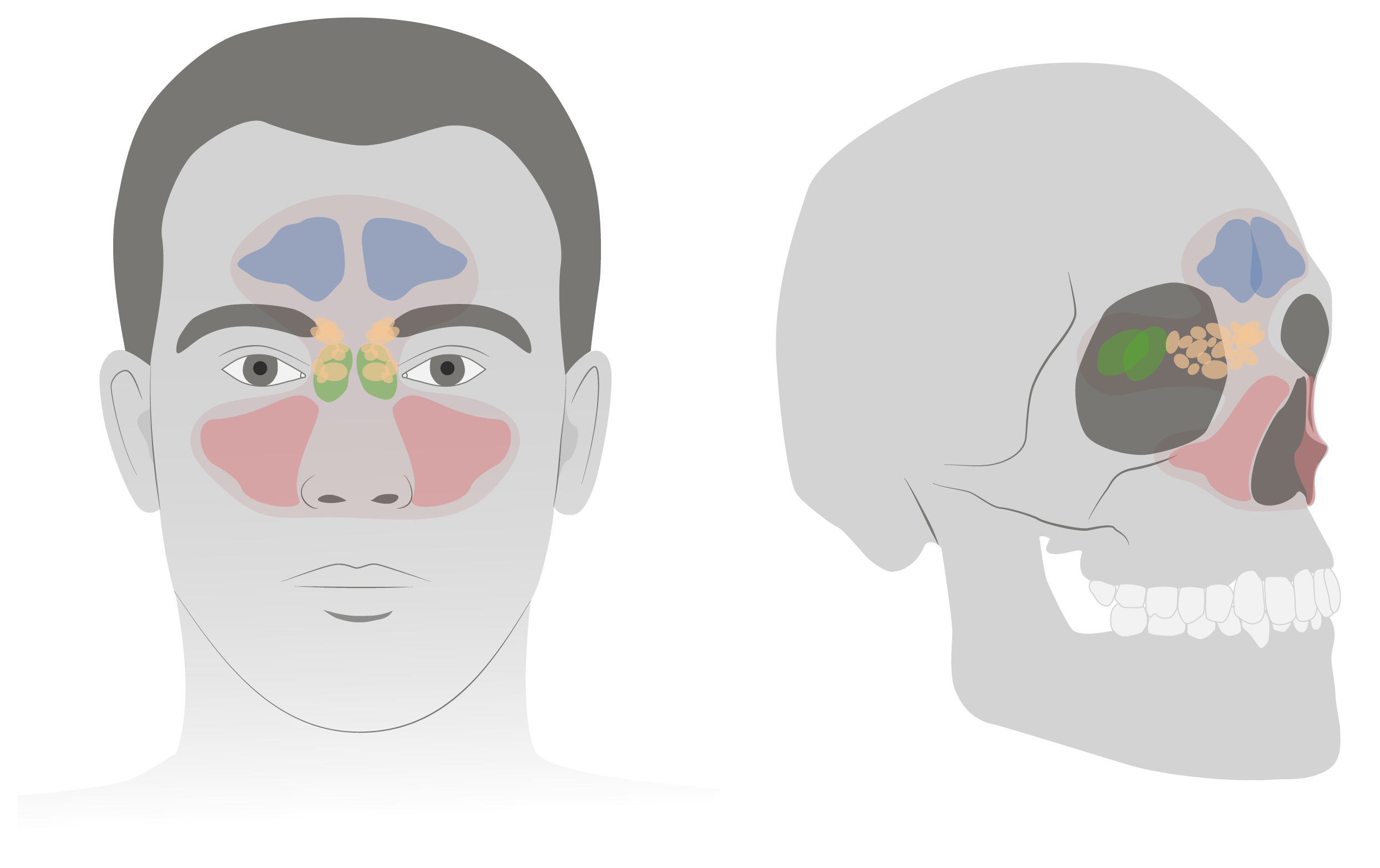 Sinusitis
Sinusitis refers to inflammation of the mucosal lining of the paranasal sinuses. The condition usually occurs concurrently with inflammation of the nasal mucosa (rhinitis), a condition known as rhinosinusitis. Acute sinusitis is due to an upper respiratory infection caused by a viral, bacterial, or fungal agent. Viral etiologies are the most common cause. Sinusitis presents with facial pain over the affected sinus and purulent rhinorrhea. Diagnosis is usually clinical and management is supportive, although it may require antibiotics.
read more
Load more
Share
Ask Questions
Take Notes
Download Slides
Report Mistake
Comments
show all Show less
My Notes
show all Show less
Learning Material 2
show all Show less
Report mistake
Transcript
0 of 0

00:01 Let’s switch fro noses to sinuses. 00:04 So the sinuses can get infected and this is sinusitis. 00:09 So this is an infection of the mucosal lining of any of the paranasal sinuses. 00:14 Remember that sinuses are different in children and adults. 00:18 You’re not born with all your sinuses. 00:21 Let’s go through them. 00:22 The ethmoid sinuses are those tiny ones right there on middle, those are present at birth. 00:28 The maxillary sinus will usually show up sometime in the first year of age. 00:34 And the sphenoid sinus will show up shortly thereafter. 00:37 But the frontal sinuses don’t show up typically until after 10 years of age. 00:42 So if a patient is complaining of a frontal headache, it’s probably not a sinusitis if they’re under 10. 00:49 So how do we diagnose sinusitis? Typically, what we do is we assume in acute sinusitis if a patient has had more than 10 days of nasal drainage and irritation or less than 30 days of symptoms. 01:05 That’s acute sinusitis, but it has to be more than 10 days of symptoms and it has to be sort of unrelenting. 01:11 It’s continuing on, not about to get better. 01:15 A subacute sinusitis is typically a patient with 4 to 12 weeks of symptoms and chronic sinusitis is typically more than three months of symptoms. 01:25 So what are the organisms in bacterial sinusitis? Well, strep pneumoniae, non-typeable H. flu, and Moraxella catarrhalis, which are your classic ear infection organisms, can also affect the sinuses. 01:39 But the sinuses can also have staph aureus and a variety of anaerobes. 01:44 So it’s generally a very mixed picture of an infection. 01:49 There are certain diseases that are more associated with sinusitis than others. 01:54 So patients with cystic fibrosis are often cursed with recurrent sinusitis. 01:59 Patients with Kartagener syndrome are at increased risk for sinusitis. 02:04 And certain immune deficiencies are also at risk. 02:07 Typically, humeral immune deficiency such as low IgA, low IgG or Job’s syndrome, which is hyper IgE syndrome or patients with common variable immunodeficiency which usually shows up a little bit later. 02:22 So those are the immunodeficiencies that are typically associated with sinusitis. 02:26 And these patients usually get recurrent episodes. 02:31 So what are some other risk factors for sinusitis? Well, smoke exposure certainly like these children, you’d have a risk factor, but also second hand smoke exposure is a common risk factor for sinusitis. 02:45 Also, frequent URI symptoms is a risk factor for sinusitis as is chronic allergic inflammation. 02:52 So these very allergic kids may be at more risk for sinusitis. 02:57 So how do we diagnose it? Well, they have to have nasal discharge for more than 10 days. 03:02 They need to have purulent discharge and/or high fever. 03:06 And you should have generally, facial pain and headache, but that is less common in children than it is in adults. 03:14 Sinus films are really not useful. 03:17 They’re really not useful and a CT is diagnostic, but there’s a high false positive rate in that many people who are asymptomatic will show up with sinusitis, like you can see in this patient with extensive sinus disease. 03:31 Or you might be unnecessarily irradiating the patient. 03:35 So remember, children are at increased risk for cancer with radiation exposure because they’re doing more mitosis. 03:42 So we really want to avoid radiation exposure in kids. 03:45 And so a CT of the sinuses is really not indicated. 03:49 This is a clinical diagnosis. 03:52 More than 10 days of purulent congestion and there’s your diagnosis. 03:58 What do we give them? Well, typically, because of the broad nature of the organisms that can cause the disease, you start with amoxicillin/clavulanic acid. 04:07 If they’re allergic to penicillin, you can also do clindamycin. 04:10 If there’s no improvement in 72 hours, discontinue the antibiotic and consider another cause like virus or underlying problems. 04:19 Therapy for seven days after resolution of symptoms is indicated so it’s usually up to 10-day course. 04:24 In other words, start antibiotics. 04:26 On day three, if they’re not getting better, it’s probably not bacterial sinusitis, you can stop the med. 04:33 If they are getting better, continue for a 10-day course. 04:37 There’s no evidence that nasal washers or steroid sprays or anything like that is beneficial. 04:43 Also, consider ear, nose and throat referral for endoscopy for severe or chronic or unresolved cases. 04:51 They might have problem in there like polyps or they might have an underlying disorder, which can be diagnosed by biopsy, like Kartagener syndrome. 04:59 So that’s my review of nasal problems in kids. 05:03 Thanks for your time.

The lecture Sinusitis (Sinus Infection) in Children by Brian Alverson, MD is from the course Pediatric Emergency Medicine.

Which of the following sinuses is least developed before the age of 10 years?

Which of the following is not a common pathogen in bacterial sinusitis?

Which of the following best defines acute sinusitis in chlildren?

Which of the following typical symptoms of acute sinusitis is more commonly found in adults than in children?

Which of the following is the initial antibiotic of choice in children with acute uncomplicated bacterial sinusitis?