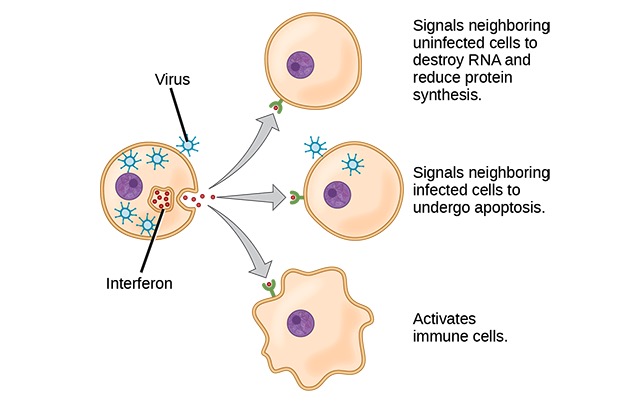 Interferons
Interferon (IFN) is a cytokine with antiviral properties (it interferes with viral infections) and various roles in immunoregulation. The different types are type I IFN (IFN-ɑ and IFN-β), type II IFN (IFN-ɣ), and type III IFN (IFN-ƛ). Type I IFNs have been extensively studied; these proteins bind to cell-surface receptors when triggered by a viral infection. After stimulation, pathways are activated to produce proteins (e.g., ribonuclease) that inhibit viral replication. An antiviral state is created in both infected and uninfected cells. Type I IFN also has antitumor properties. The antiviral activity of type II IFN (IFN-ɣ) is not as potent as that of type I, but IFN- ɣ is crucial in macrophage activation. The recently discovered IFN-ƛ is noted to have activity against intestinal viruses. With a wide range of biologic effects, interferons are used in therapy for malignancies, infections, and other immune-related conditions (e.g., multiple sclerosis).
read more
Load more
Share
Ask Questions
Take Notes
Download Slides
Report Mistake
Comments
show all Show less
My Notes
show all Show less
Learning Material 2
show all Show less
Report mistake
Transcript
0 of 0

Which of the following is responsible for recruiting macrophages to the site of inflammation?

Which of the following secretes interferon-gamma?

What is the function of interferon-gamma?

Which of the histological changes manifests 5 days after myocardial infarction?