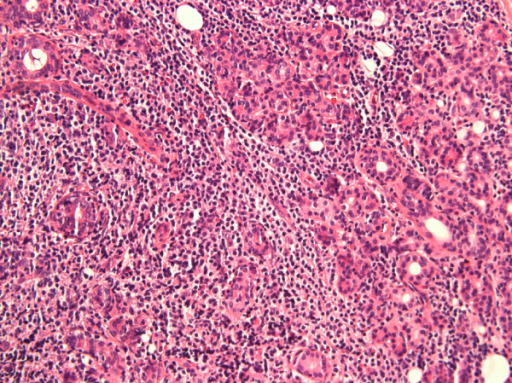 Sjögren's Syndrome
Sjögren syndrome (SS) is an autoimmune, inflammatory condition where glandular tissues, such as the salivary and lacrimal glands, are infiltrated by lymphocytes, resulting in decreased tear and saliva production. The disease mainly affects middle-aged women, and is associated with other autoimmune conditions. Patients may experience symptoms and complications related to dry eyes and mouth. There is a wide range of extraglandular manifestations, including Raynaud's phenomenon, neuropathy, and cutaneous vasculitis. Patients are also at an increased risk of developing non-Hodgkin's lymphoma. Diagnosis is based on the presence of symptoms, and is validated by the clinical examination, serologic studies, or salivary gland biopsy. A multidisciplinary approach is needed to manage patients and targets symptomatic relief, with immunosuppressive therapy reserved for severe symptoms.
read more
Load more
Share
Ask Questions
Take Notes
Download Slides
Report Mistake
Comments
show all Show less
My Notes
show all Show less
Learning Material 2
show all Show less
Report mistake
Transcript
0 of 0

00:01 Alright, so let's do a quick review. 00:02 I'll ask some questions, feel free to pause the screen, come up with your own answer, and then unpause the screen and we'll see what we came up with. 00:10 First off, all of the following are commonly associated with Sjogren's syndrome except: alright, so we talked about the family of autoimmune diseases with Sjogren's syndrome. 00:24 One of which is definitely Raynaud's phenomenon. 00:27 Again, along with lupus, scleroderma, and others. 00:31 Next stop, Hodgkin's lymphoma, I know we said something about Hodgkin's, it was non-Hodgkin's lymphoma, that's the one that's associated with Sjogren's so that's gonna be our answer and by virtue of it being an incorrect choice. 00:43 Just to round things out, sublingual gland enlargement; definitely a feature of Sjogren's syndrome. 00:49 Oral thrush as we mentioned, by virtue of having a dry mouth and not having saliva. 00:54 And then the dental caries along the same lines. 00:57 Okay, the answer should be non-Hodgkin's lymphoma. 01:00 Question two, which of the following is not typically found in Sjogren's syndrome? Okay, the first two; anti-Ro and anti-La, SSA and SSB, guess what the SS stands for? Both of those can definitely be found in Sjogren's syndrome even if they're not perfectly specific for that condition. 01:22 Anti-Scl-70 antibody however, that is for diffused cutaneous systemic scleroderma, so that's not associated with Sjogren's syndrome. 01:33 It's also not in that family of autoimmune conditions that we were talking about before. 01:37 Rheumatoid factor as we saw in our patient is often positive. 01:40 And elevated ESR or CRP would not be unusual either. 01:44 So our answer in this case is definitely number three. 01:47 And with that, I think we've come to the end.

A 46-year-old woman presents to the clinic with recurrent oral thrush and dry eyes. Physical examination is significant for scrapable white patches on the tongue, dental caries, bilaterally enlarged parotid glands, and bilateral conjunctival injection. What is the most likely diagnosis?

Amazing, live saving; it made Sjorgren so easy and memorable

Amazing, live saving; it made Sjorgren so easy and memorable