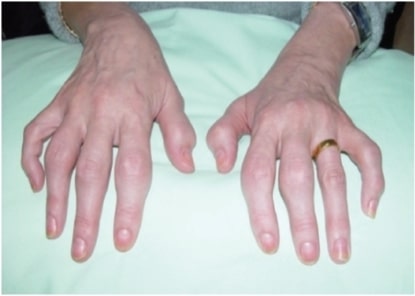 Psoriasis
Psoriasis is a common T-cell–mediated inflammatory skin condition. The etiology is unknown, but is thought to be due to genetic inheritance and environmental triggers. There are 4 major subtypes, with the most common form being chronic plaque psoriasis. Plaques are well-circumscribed and salmon-colored, with silvery scales. Plaques commonly appear on the scalp and extensor surfaces of the extremities. Diagnosis is clinical. Treatment options are determined by the percentage of body surface area (BSA) affected and include topical corticosteroids, retinoids, calcineurin inhibitors, disease-modifying antirheumatic drugs (DMARDs), biologics, and phototherapy.
read more
Load more
Share
Ask Questions
Take Notes
Download Slides
Report Mistake
Comments
show all Show less
My Notes
show all Show less
Learning Material 2
show all Show less
Report mistake
Transcript
0 of 0

00:00 Alright, so we're seeing here in indolent course six months of increasing pain and swelling. 00:06 That is a pretty typical picture of psoriatic arthritis. 00:10 It's going to involve the fingers, the spine and the sacred iliac joints. 00:15 Remember, we talked about that finding on the finger that was swollen the dactylitis. 00:20 Well, that feature is also sometimes called sausage shaped digits. If we were to look at an MRI of that digit, as shown here, on the bottom right, we would see bone marrow edema. 00:30 You might see some interphalangeal joint synovitis, soft tissue, edema, and inflammation. What we're really seeing in this patient with a shortened index finger is something called telescoping, where the distal phalanx actually collapses onto the middle or proximal phalanx. This is a late finding of psoriatic arthritis, sometimes also known as arthritis mutilans. Psoriatic arthritis, the key point here is that it's particularly destructive relative to the other spondyloarthritides and you can really have some progressive joining deformities if this disease goes untreated. 01:05 Highlighting again just some key sites where we see psoriatic arthritis involvement. It's going to be the DIPs and then perhaps some of the PIPs, but not the MCPs or the wrists. 01:15 In addition, as shown in the right picture by Vesalius, you're going to see some involvement of the lumbar spine and the SI joints. 01:23 Management pretty similar to the other spondyloarthritides, you want to keep these people moving with PT and OT, get some NSAIDs on board, you're probably going to add on some disease modifying anti-rheumatic drugs and likely some TNF inhibitors, especially with a guy who's got such advanced disease. 01:39 You want to move on beyond NSAID and start being more aggressive. 01:45 All right now our key points for psoriatic arthritis. 01:48 This is a chronic, progressive, peripheral arthritis. 01:52 The classic features involved the DIP joints, the SI joints and you're going to see some destructive erosive lesions when you go looking for them on X-ray. 02:00 More than 60% of patients have concomitant skin psoriasis at the time of diagnosis. More than 80% of them will have had psoriasis at some point in the recent past. It is a seronegative spondyloarthritis most of the time, remember that our patient actually did have a low grade rheumatoid factor. 02:19 The HLA b 27 positivity is associated with psoriatic arthritis though not quite as strongly as with the other spondyloarthritides and like all of the other ones you're going to use NSAIDs and next line would be TNF inhibitors.

The lecture Psoriatic Arthritis: Diagnosis and Management by Stephen Holt, MD, MS is from the course Spondyloarthritides.

Which of the following clinical signs is associated with psoriatic arthritis?