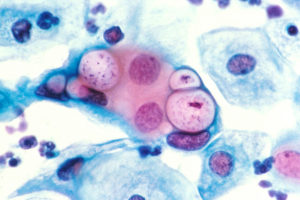 00:01 We turn our attention now to what is really a complication of a sexually transmitted infection, and that is pelvic inflammatory disease. 00:14 We would define it as a sexually transmitted infection which leads to a clinical syndrome of inflammation from the cervix to the endometrium, and involving the fallopian tubes and the contiguous pelvic structures. 00:28 It can be quite a serious process. 00:36 The numbers are pretty serious as well. 00:39 A million women in the United States each year present with pelvic inflammatory disease. 00:47 We call it PID. 00:52 You can expect it in about 40% of women who develop endocervicitis, and get no treatment, whether it's due to Neisseria gonorrhoeae or Chlamydia trachamatis. 01:08 The women who are likely to get PID are often teenagers -- three times more than women of the age 25 to 29 women who have multiple sexual partners someone with a new sexual partner within the previous 30 days, or frequent sexual intercourse with a single partner. 01:35 These are also risky types of behavior for pelvic inflammatory disease. 01:42 There are some other associations some of which, we don't clearly understand, and one of these is bacterial vaginosis. 01:52 Women with this process are more prone to developing PID. 02:00 For reasons that are probably a little more obvious, a woman who has an intrauterine device is more likely to have organisms track up the genital tract. 02:14 Women who douche a lot also may be subject to pelvic inflammatory disease, and the process seems to occur during menses. 02:29 It's fascinating that women who smoke cigarettes have an increased incidence of pelvic inflammatory disease in virtually all studies. 02:40 The mechanism is not very clear. 02:43 Some speculate that the cigarette smoke makes the cilia of the fallopian tubes, dysfunctional. 02:54 perhaps allowing organisms to move up the fallopian tubes. 03:00 And there is an association that's not well explained with substance abuse and PID. 03:07 So the causes of pelvic inflammatory disease are these notorious pathogens again -- Neisseria gonorrhoeae, Chlamydia trachomatis, and a wide variety of other bugs as well. 03:23 These include anaerobic bacteria, and it should be pointed out, that in human beings life on man and woman is anaerobic. 03:34 Anaerobes actually outnumber aerobes, for example, in the colon, by a thousand to one. 03:42 Aerobic Gram-negative rods other colonic type organisms Streptococci and Mycoplasma can be involved. 03:52 So very often when you have infection that's pelvic inflammatory disease, you actually have mixed organisms on a Gram-stain smear. 04:05 So a little about the pathogenesis. 04:10 We have direct, canalicular spread of organisms from the endocervix to the endometrial mucosa and to the fallopian tubes. 04:22 And this is not proven, but it is speculated that sexually transmitted organisms like Neisseria gonorrhoeae cause this inflammation of the tubal mucosa and they facilitate other organisms, say, from the GI tract moving up into the female genital tract. 04:44 But as I mentioned, the mechanisms are rather poorly understood but unfortunately, pelvic inflammatory disease comes with some long-term sequelae, like scarring. 04:57 And when the fallopian tubes are scarred things like ectopic pregnancy can develop.

The lecture Pelvic Inflammatory Disease (PID): Definition and Pathology by John Fisher, MD is from the course Genital and Sexually Transmitted Infections. It contains the following chapters:

Which of the following is LEAST likely to increase the risk of pelvic inflammatory disease (PID)?

Which of the following is a chronic complication of pelvic inflammatory disease?

Which of the following conditions most likely disrupts the barrier that protects the normally sterile upper genital tract from vaginal organisms?

Inflammation of which of the following anatomical structures is NOT pelvic inflammatory disease?