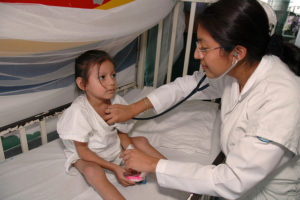 00:02 So, let’s turn now away from the pathophysiology and look more practically at how patients present. 00:09 Typically, they’ll have upper or diffuse abdominal pain that may radiate to the back and usually worsens with meals, especially fatty meals as the pancreas is more responsive to the ingestion of fat than for example clear liquids. 00:25 There may be a slight delay in the pain because the pancreas is going to wait to constrict and shoot out its exocrine materials when the stomach sends the signal that it’s going to be releasing a fatty bolus. 00:40 These patients may have nausea, they may have vomiting, and they often have fever as well, especially when an infection is involved. 00:51 On your exam of a patient with pancreatitis, you will usually notice tachycardia. 00:55 That may be both from pain, and also from dehydration because these patients typically don’t want to drink. 01:02 They may develop hypotension either from primary dehydration or from sepsis as a result of infection. 01:11 Typically, we will see a small degree of abdominal distention, more maybe in the epigastric region. 01:19 And you may well notice decreased bowel sounds. 01:23 What’s key is palpable abdominal mass if there’s a pseudocyst. 01:29 So, if there’s a mass in that pancreas, you may well be able to palpate it. 01:34 Patients may also have jaundice. 01:37 If you’re suspecting pancreatitis, the key enzyme to obtain is the lipase. 01:43 We used to get amylase and lipase but the amylase is less specific because it also is produced by the salivary glands. 01:51 We will typically see patients with an elevated CRP, especially in severe disease. 01:58 Patients may have an elevated alk phos, GGT, and ALT and AST, especially if the whole system is involved as opposed to just the pancreas. 02:09 They may have elevated bilirubin, especially if these are gallstones, and there’s a lot of backup and they’re starting to get congested liver. 02:19 There are some findings that indicate a poor prognosis with pancreatitis. 02:24 The first is hypocalcemia. 02:27 Patients with hyperglycemia may have involvement of their endocrine as opposed to just exocrine function of the pancreas. 02:35 This implies a more severe illness. 02:37 Patients with coagulopathy probably have liver involvement and are in a bit of trouble. 02:44 And if a patient has a metabolic acidosis, they’re likely fairly sick and we have to be more worried about them. 02:53 So, if we get some labs, we might want to confirm exactly what’s going on. 02:57 Is there a pseudocyst? Is there a mass? What is the cause of this pancreatitis? And the test of choice for imaging is the abdominal ultrasound. 03:06 Again, in children, we’re trying to move away from irradiation as a method of imaging. 03:13 If the abdominal ultrasound is not able to be obtained, which might happen in a patient who’s more overweight or has a thicker body habitus, we will usually proceed to MRI, or if we can’t get them to hold still, a contrast, CT. 03:30 Here, you can see a very significant involvement of the pancreas on this scan. 03:37 Alternatively, patients can get endoscopic retrograde cholangiopancreatography or ERCP. 03:45 However, this modality is very rarely used because the ERCP itself can in fact cause pancreatitis. 03:53 This is not a benign intervention. 03:58 Treatment of pancreatitis really depends on severity. 04:02 For acute uncomplicated pancreatitis, which is the vast majority in children, pain control is key. 04:11 We often will give NSAIDS, and we may give opiates as well. 04:16 IV hydration is critical for maintaining their hydration and preventing a metabolic acidosis. 04:22 Mostly, we will have them NPO while vomiting. 04:28 Maybe 20 years ago, we would maintain NPO status well past the stage at which they were having pain and vomiting. 04:36 But now, we really limit the NPO period during active vomiting, and we’re a little bit more aggressive in advancing the diet, starting with clears and gradually moving into a low-fat diet. 04:49 We like low-fat diet because it’s less stressful on the pancreas, which is responsible for making the lipase that will digest the fat. 04:01 Patients can get complications of pancreatitis, and this includes pseudocysts. 05:07 Patients can very rarely get splenic vein thrombosis. 05:12 They may get sepsis. 05:14 They may get ARDS or develop a systemic inflammatory response as a result of the infection and the autodigestion of the pancreas, and they may eventually develop multi-organ failure. 05:27 So this can be a very severe disease. 05:30 But as I said, majority of patients are simple acute pancreatitis who get better, and many of these complications are mostly in older people. 05:41 The prognosis in children is reasonably good. 05:45 Uncomplicated cases typically resolve in three to seven days, and patients can be discharged from the hospital when they’re able to maintain hydration and their pain is under control. 05:56 There is a slightly increased risk of carcinoma in patients with hereditary pancreatitis. 06:02 So we want to keep an eye on those patients because pancreatic carcinoma can be very hard to detect and has a high mortality rate because of that problem. 06:14 Associated conditions may affect your prognosis, if a patient has systemic disease or trauma. 06:21 Patients with systemic inflammatory response syndrome have a much worse prognosis than patients who have simple pancreatitis. 06:31 Prevention. 06:32 Well, in most cases, this is an idiosyncratic event. 06:36 It just happens and there’s not much that you can do for prevention. 06:39 But certainly, if you have a patient who’s abusing alcohol, for example, addressing that is important. 06:46 A low-fat diet is important for all of us, but it’s especially important for people with problems with their pancreas. 06:53 Remember, low-fat diet will result in a shorter gastric transit time and will be less stressful on the pancreas and will prevent recurrent acute episodes.

The lecture Pancreatitis in Children: Signs, Symptoms, Diagnosis & Management by Brian Alverson, MD is from the course Pediatric Gastroenterology. It contains the following chapters:

Which of the following findings does NOT indicate a poor prognosis for pancreatitis?

The pain in pancreatitis typically increases with with what kind of meal?

A 17-year-old is rushed to the ER with complaints of abdominal pain and vomiting. You suspect pancreatitis and send blood samples to the lab for biochemical testing. Which of the following additional imaging would be helpful to confirm your suspicion?

Which of the following is NOT included in the treatment of acute uncomplicated pancreatitis?