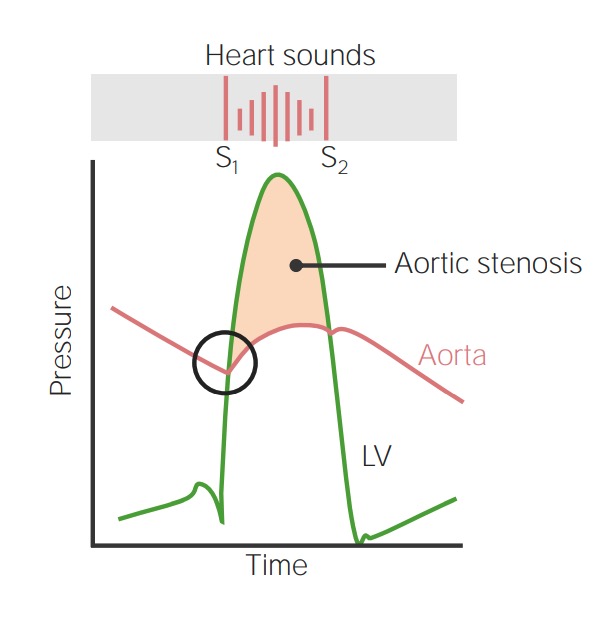 Aortic Stenosis
Aortic stenosis (AS), or the narrowing of the aortic valve aperture, is the most common valvular heart disease. While rheumatic heart disease remains the most frequent etiology worldwide, degenerative AS and congenital bicuspid valve defect are the 2 usual causes in developed countries. Aortic stenosis gradually progresses to heart failure, producing exertional dyspnea, angina, and/or syncope. A crescendo-decrescendo systolic murmur is audible in the right upper sternal border. Doppler echocardiography is the imaging of choice, showing structural and flow changes in the valvular area. Valve replacement is the only effective treatment for symptomatic severe AS. Indications for the procedure depend on the patient's symptoms, degree of AS severity, exercise tolerance, concurrent cardiac abnormalities, surgical risk, and life expectancy.
read more
Load more
Share
Ask Questions
Take Notes
Download Slides
Report Mistake
Comments
show all Show less
My Notes
show all Show less
Learning Material 2
show all Show less
Report mistake
Transcript
0 of 0

The lecture Pathophysiology and Clinical Manifestations – Calcific Aortic Stenosis by Richard Mitchell, MD is from the course Valvular and Hypertensive Heart Disease.

Which of the following risk factors is NOT related to calcific valvular degeneration?

Which aspect of the aortic valve system is typically affected by calcific degeneration?

Which of the following statements about patients with bicuspid aortic valves is TRUE?

At what aortic valve orifice diameter do most patients become symptomatic from calcific aortic stenosis?

What three conditions or symptoms are associated with increased mortality within 2–5 years in patients with calcific aortic stenosis?

What is the current treatment for symptomatic calcific aortic valve stenosis?