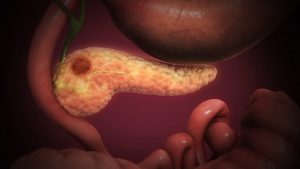 The lecture Pancreatic Abnormalities by Hetal Verma, MD is from the course Abdominal Radiology. It contains the following chapters:

Which of the following is an accurate statement about acute pancreatic fluid collections?

A 52-year-old male presents to the emergency room with complaints of pain in the abdomen which started gradually, now reaching 8/10 in intensity. Past medical history reveals a similar episode a year ago. The patient is a chronic alcoholic with heavy consumption the previous day. A CT scan of the abdomen revealed ductal dilatation, peripancreatic inflammatory changes, and diffuse enlargement of the pancreas. What is the most likely reason behind this patient’s current symptoms?

Which of the following is NOT a complication of acute pancreatitis?

Which statement helps to differentiate a pseudocyst from an acute fluid collection?

Which artery is most commonly damaged resulting in pseudoaneurysm?

Which of the following is NOT attributed to chronic pancreatitis?