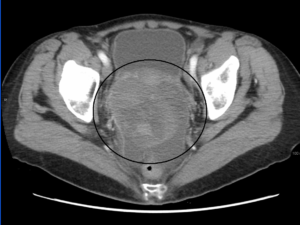 00:01 So let?s move on to endometriomas. 00:03 An endometrioma is an endometrial tissue implant that repeatedly hemorrhages because of hormonal stimulation. 00:10 It?s referred to as a ?chocolate cyst? because of its appearance as a dark cystic lesion. 00:16 It contains homogeneous low level internal echoes on ultrasound. 00:20 So it?s somewhat similar in appearance to a hemorrhagic cyst. 00:23 On MRI however, it has a more classic appearance. 00:26 So it?s bright on the T1 weighted images and it remains bright on the T1 fat saturated images and it has what we call T2 shading. 00:34 So T2 shading is loss of signal on the T2 weighted images in a cyst that is actually bright on T1. 00:41 It has a very similar appearance as I said to a hemorrhagic cyst on ultrasound. 00:45 However, MRI is where we can differentiate the two. 00:48 So an endometrioma is bright on T1 but it?s dark on T2 weighted images or the T2 shading as we mentioned. 00:55 A hemorrhagic cyst however is bright on both T1 and T2 weighted images. 00:59 So let?s discuss ovarian tumors a little bit. 01:02 We can have both serous and mucinous cystadenomas and cystadenocarcinomas within the ovary. 01:08 These are primarily cystic but they do contain an irregular solid component usually and they?re best evaluated on CT or MRI. 01:17 You can see a solid mass on ultrasound but we really can?t characterize it any further until we do either a CT or MRI for better evaluation. 01:24 Ovarian torsion is one of the most common findings on an ovarian ultrasound. 01:29 This is twisting of the ovary and fallopian tubes that results in a lack of blood flow to the ovary. 01:34 It commonly occurs associated with an ovarian mass that acts as a lead point. 01:39 So this could be a dermoid, this could be a solid mass. 01:41 It could be a cystic lesion but some kind of mass that results, that acts as a lead point. Most commonly, torsion presents as severe unrelenting pelvic pain clinically and these patients come in and have a pelvic ultrasound for further evaluation. 01:55 So what are some of the imaging findings that you need to look for in ovarian torsion? The ovary maybe enlarged, is usually greather than about 4cm in size. 02:04 It can be very heterogeneous and echogenic-appearing because of the edema flowing into it. 02:09 You may have pelvic free fluid. 02:11 Again, because of the edema and inflammation within the ovary that leaks out and results in free fluid within the pelvis and the blood flow may actually be preserved because the ovary has a dual blood supply from both the ovarian and uterine arteries. 02:23 So you don?t wanna be fooled by preservation of blood flow. 02:26 However, blood flow becomes absent as time progresses and that usually indicates infarction. 02:32 So ovarian torsion is treated usually by open or laparoscopic surgery and the adnexa is untwisted prior to the ovary becoming infarcted. 02:41 If the ovary has infarcted, then the treatment is usually unilateral salpingooophorectomy. 02:46 So at that point, you can no longer salvage the ovary. 02:49 So let?s go back to the case that we started off the lecture with. 02:52 This is our 23-year old with right pelvic and abdominal pain. 02:56 We have a couple of ultrasound images and we have a couple of CT images on this patient. So let?s take a look. 03:03 These are the two ultrasound images that we have. 03:05 This is an image of the ovary and then we have an image of the uterus right here. 03:11 So what do you see on these? So on the ultrasound image, we actually have an ovarian cyst that has low level internal echoes. 03:25 You can see that a portion of this cyst has these internal echoes while a small portion of it doesn?t have any echoes. 03:31 In addition, we have echogenic free fluid within the pelvis. 03:35 On the CT images, we actually see what appears to be a cyst in the pelvis. 03:41 We have a little bit of fluid within the endometrial cavity and we have fluid that tracks up to the upper abdomen on both sides. 03:49 So this is actually an example of a ruptured hemorrhagic cyst. 03:53 When a hemorrhagic cyst ruptures, it can cause hemorrhagic free fluid to accumulate within the pelvis and abdomen and actually can track to the upper abdomen bilaterally and that?s what happened in this patient. 04:03 However, hemorrhagic cysts are benign and no further follow-up is usually indicated. 04:07 This should resolve on its own. 04:09 So in this lecture, we?ve discussed some common ovarian pathology. 04:13 Let?s move on to other topics in RGU section now.

The lecture Ovarian Abnormalities: Endometrioma and Ovarian Tumors by Hetal Verma, MD is from the course Abdominal Radiology. It contains the following chapters:

What are the imaging characteristics of an endometrioma?

What is the most common presenting complaint in an ovarian torsion?

Which of the following is NOT an imaging finding in ovarian torsion?