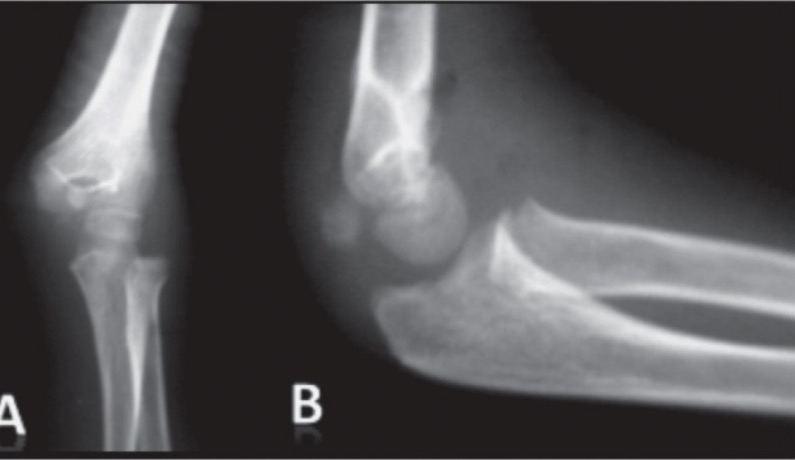 Elbow Dislocation
Elbow dislocation is the displacement of either the radius or the ulna relative to the humerus. The most common mechanism of injury is falling on an outstretched hand. Elbow dislocation presents with joint swelling, pain, and restricted range of motion. Dislocation of the elbow can be classified into simple or complex depending on the absence or presence, respectively, of a concomitant fracture. Dislocations are diagnosed with an X-ray. Management depends on whether the dislocation is simple or complex. Simple dislocations are managed with joint immobilization and casting, while complex dislocations require open reduction and internal fixation. Elbow dislocations can be complicated by joint contractures, which are due to fibrotic changes in the joint capsule, or permanent joint instability, which are due to loose ligaments.
read more 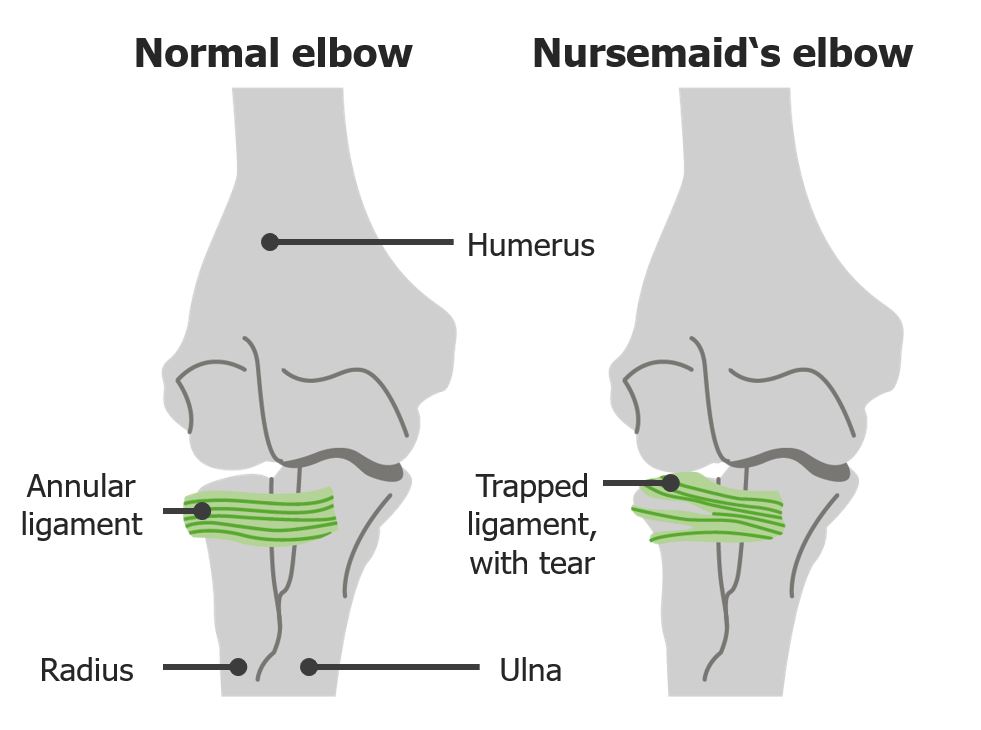 Radial Head Subluxation (Nursemaid’s Elbow)
Radial head subluxation, also known as nursemaid’s elbow or babysitter’s elbow, is a frequent injury seen in children under 4 years of age and describes the subluxation of the radial head under the annular ligament at the elbow. The injury primarily occurs when a child is pulled, swung, or lifted by 1 arm. Patients present holding their injured upper limb in a guarded and pronated position. Diagnosis is made clinically and the condition is managed by a closed-reduction maneuver. Prognosis is excellent when diagnosed in a timely manner.
read more 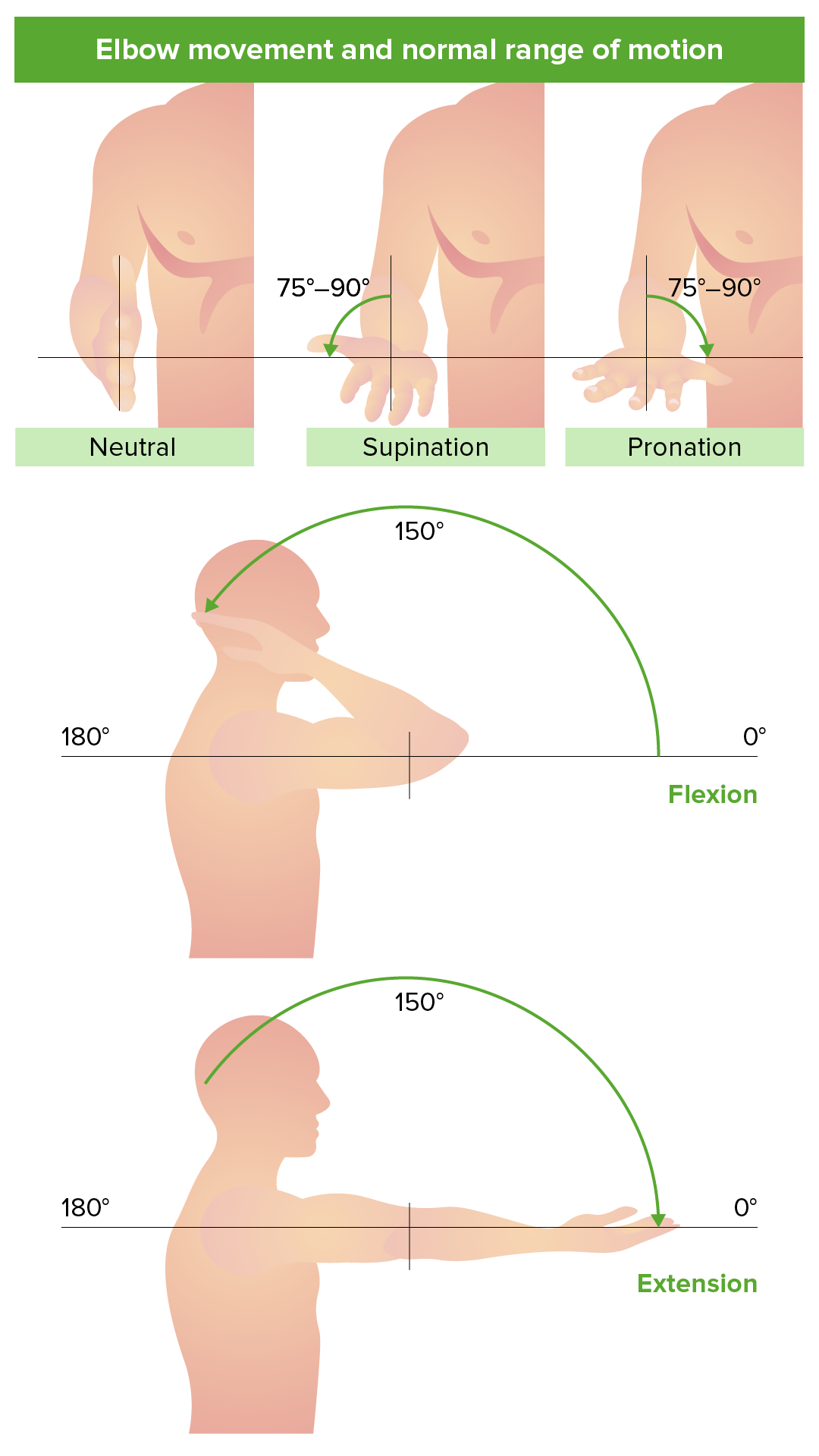 00:01 In this brief lecture, I’m going to review Nursemaid's elbow. This is a relatively benign condition that happens very frequently. So, we should definitely review it. This is the most common upper arm injury that's specific to toddlers. Basically, the idea is and the reason it is called a Nursemaid's elbow is a person who is caring for a toddler is leading the child across the street and then holds the child’s arm aggressively as the child perhaps tries to run across the street too soon. This outward yanking on the arm will cause a dislocation of the radial head, not really a dislocation perhaps but a subluxation, a very slight external pressure which slightly aggravates the radial head and moves it just out of joint. 00:51 So, all we do is the radial head is pulled. It caused it to slip partially through the annular ligament. 01:00 When the pull is released, the radial head snaps back but that traps a ligament between it and the capitellum. 01:09 So, an X-ray is usually read as normal because it snapped back. So, an X-ray isn’t going to tell you very much. 01:17 Generally, if you have a history of a brief yanking on the arm and the child is holding their arm in the traditional position, you don't require an X-ray. However, if there’s a confusion as to what exactly the injury was, we may get an X-ray to rule out other fracture or injury if the story is unclear. 01:38 Typically, a child with a Nursemaid’s elbow will be holding their arm in a pronated and mildly fixed position like I am now with my right arm. You can see it's slightly pronated and slightly bent at the elbow. 01:51 They won’t want to move it. So, you can fix a Nursemaid’s elbow. It’s very easy. I’ll walk you through the steps. 02:00 First, warn the mom that this is going to hurt a little bit and the child is likely to cry. Then, fully extend the elbow. 02:10 Then fully supinate the forearm. Then fully flex the elbow. If you have your hand in the correct place, you often will feel a little click as the ligament and the whole system there is fixed. The child is now cured but the child still won’t want to move their arm. So now, you walk out of the room. Come back in 15 minutes with a popsicle or some sort of thing the child wants. But don't let them grab it with their good arm. 02:42 Make them grab it with their bad arm. Eventually, their desire for the popsicle will overwhelm their fear of moving their arm. Once they notice they’re cured, they’ll be all back to normal. Let me walk you through the steps with my own arm. What we’re going to do is we’re going to have me, and I’m the child in a flexed and pronated position, first, we’re going to extend my elbow then we’re going to supinate my elbow. 03:09 You’re going to have your free arm right here on my elbows. So, you can feel that click that’s about to happen. 03:15 Then you will flex my elbow all the way up. You want to do this pretty quickly. You just go like that. 03:23 Then you feel that click, you walk out of the room. Sometimes it takes a couple of tries to get it right but eventually, you’re going to relocate that elbow if you do this. That’s about it for nursemaid’s elbow. 03:36 Thanks for your attention.

The lecture Nursemaid's Elbow by Brian Alverson, MD is from the course Pediatric Rheumatology and Orthopedics.

Which of the following is TRUE of nursemaid’s elbow?

Excellent lecture. All the key points are mentioned, including the maneuver and the behaviour to check the arm. Great explanation of the pathophysiology. Once more, my teachers and supervisors could learn a lot from you.

The popsicle walk back in the room is the best trick I heard so far!

Excellent lecture. All the key points are mentioned, including the maneuver and the behaviour to check the arm. Great explanation of the pathophysiology. Once more, my teachers and supervisors could learn a lot from you.

The popsicle walk back in the room is the best trick I heard so far!