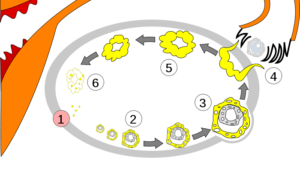 Physiological Effects of Estradiol and Progesterone & Menstrual and Endometrial Cycle
The female reproductive system consists of two ovaries, two fallopian tubes, the uterus, cervix and external genitalia. Every female undergoes a monthly cycle of 28 days, in which an egg is released from either ovary and the lining of the uterus is prepared for the implantation of an embryo, which eventually sheds off in case fertilization does not occur. This normal physiological mechanism is controlled by a number of hormones, secreted by the hypothalamus, pituitary gland and ovaries themselves. Any aberration in the release of these hormones may result in menstrual cycle abnormalities or infertility.
read more
Load more
Share
Ask Questions
Take Notes
Download Slides
Report Mistake
Comments
show all Show less
My Notes
show all Show less
Learning Material 2
show all Show less
Report mistake
Transcript
0 of 0

00:00 In this lecture, we're going to review the normal menstrual cycle. This is essential for you to understand so you don't have to memorize things and can figure out questions on the USMLE just by understanding the normal menstrual cycle. First, if you're getting a little tired during your studying that's normal. I wanted to leave you with an inspirational quote. "If sometimes you feel yourself a little useless, offended, and depressed always remember that you were once the fastest and most victorious sperm out of hundreds of millions." Are you ready to get started? First let's review oogenesis. In the first trimester already oogonium are making other oogonium through mitosis. Into the second trimester, there becomes an arrest period or arrest phase. The oocyte is suspended in. This is the depleting phase. In the third trimester actually nothing changes, not until puberty when we start to ovulate do we ovulate a metaphase II egg. This egg losses its first polar body. Then, if that egg undergoes fertilization, a second polar body is lost. Only then is the egg haploid. This haploid cell then is fused with the sperm making another haploid cell to together deploy. Let's review the normal menstrual cycle. There are 2 phases: follicular and luteal. 01:39 In the midcycle, we typically have ovulation. Here you'll see a 28-day cycle which is commonly used to test on the USMLE. We have a rise in FSH so that we have recruitment of follicles from the ovary. Then, we have a midcycle rise of luteinizing hormone. This causes the oocyte, which which has been arrested in development, to resume meiosis and complete meiosis I. Then we also have a corresponding rise in estradiol. Once the corpus luteum is made after ovulation, progesterone increases in the luteal phase. How long do you think it takes to make an egg? It's okay if you don't know, that won’t be an exam question. It takes nearly 300 days. I just want you to appreciate that there are different stages of follicles within the ovary. The immature follicles in the resting phase that constitute our ovarian reserve are primordial follicles. The next stage are preantral follicles followed by antral follicles. As you can see here in C, there is an antrum or a fluid-filled cavity. As the oocyte gets larger, it becomes a mature follicle ready for ovulation. How does this occur? Well, we get LH input to LH receptors on granulosa cells after ovulation. This causes luteinization of the granulosa cell. This happens because cholesterol is a precursor for estradiol and progesterone. Now let's talk about fertilization and implantation. So, if you have normal ovulation you'll release an MII egg or metaphase II egg. That egg has already released a polar body and is receptive to fertilization. This is what it looks like when we take them out artificially for IVF or in vitro fertilization. In the tube, the fallopian tube that is, sperm will swim to this egg and fertilize it. Then, after fertilization, you have 2 pronuclei: 1 from the egg and 1 from the sperm and you can see here there are 2 polar bodies. This is a sign of fertilization. After this time, the zygote will split into a 2-cell embryo, then it will become a 4-cell embryo and on to an 8-cell embryo. This is an example of 2 beautiful 8-cell embryos. Then it will become a morula. 04:30 Next, a blastocyst. A blastocyst is an important type of embryo. Here, we can already see an inner cell mass. This is kind of like a little tight ball of cells that will become the fetus. The cells that surround the blastocyst will become placenta. They are called trophectoderm. This is essentially what fertilization looks like using electron microscopy. Again, let's review normal fertility. If you're ovulatory you will have an LH surge followed by ovulation, followed by fertilization in the oviduct or in the fallopian tube, then a morula will occur in the uterus. Implantation will be done by the blastocyst and hopefully we can now review some stages of implantation. There are 3 stages to be correct. There's apposition which is essentially the blastocyst finding the endometrium and staying there. Then there is a process called adhesion where there are certain molecules that cause the blastocyst to actually adhere to the endometrium. Then there's invasion. Here are several cartoons to show you how that occurs. Thank you for listening and good luck on your exam.

Which of the following is NOT seen in the second trimester?

Which of the following hormones significantly increases in the follicular phase of the menstrual cycle?

Which phase of the menstrual cycle will most likely remain constant even if the cycle is prolonged?

Which of the following is the earliest sign of fertilization in an in vitro environment?

Which of the following stages of development tolerates the in vitro removal of cells without altering the outcome of the baby?

Great Review, simple and concise. Entertaining, and yes I was the fastest

Excellent and to the point
By aparajeya s. on 27. April 2020 for Normal Menstrual Cycle

It is very well explained, especially when studying ObGyn, as it is important to review the most basic facts first before moving to the pathology of ObGyn disorders.

This lecture is far too basic. No depth into the how the hormones interact, no explanation for why the hormone levels at each day appear the way they do.

Great Review, simple and concise. Entertaining, and yes I was the fastest

Excellent and to the point
By aparajeya s. on 27. April 2020 for Normal Menstrual Cycle

It is very well explained, especially when studying ObGyn, as it is important to review the most basic facts first before moving to the pathology of ObGyn disorders.

This lecture is far too basic. No depth into the how the hormones interact, no explanation for why the hormone levels at each day appear the way they do.