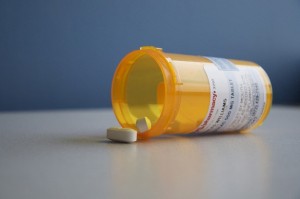 00:01 Nonsteroidal anti-inflammatory drugs are some of the most prolifically prescribed and prolifically used drugs in the world. 00:09 They are used in inflammation and for pain. They also may be used for a mild anti-fever or antipyretic effect, and they've been used to inhibit polyp formation in patients who have familial adenomatous polyp. 00:21 The long term use of these medications actually reduces the risk of colon cancer through an unknown mechanism. 00:31 Let's talk about some commonly used nonsteroidal anti-inflammatory agents. Every single patient that you see will have some kind of exposure to these drugs. So it's important that you know them. 00:42 Ibuprofen is a low potency, short acting agent. Naproxen is a low potency, long acting agent. Indomethacin is a medium potency. 00:55 And ketorolac, is a medium potency agent. Indomethacin and ketorolac have greater anti-inflammatory effects than the other two. And ketorolac is a very good anti-pain medication. Side effects can occur with these medications. 01:15 Predominantly their uses include headache and acute pain. So it depends on what type of pain you are describing. 01:21 That will generally determine what kind of anti-inflammatory agent we're going to use. 01:26 Ibuprofen is used predominantly for headache and acute pain. Naproxen is generally used for joint pain and gout. 01:33 Indocid or indomethacin is generally used for arthritis, and that's severe arthritis. It can be used for pericarditis. 01:40 We use to use it 50 milligrams three times a day for pericarditis. And ketorolac is a very potent arthritic medication. 01:50 And we also use it in athletes who have been injured. Now remember that this ketorolac is the only agent that's available in an IV or IM or subcutaneous form. So it's the only NSAID available in parenteral form. 02:06 In terms of adverse events, they have a shorter duration of antiplatelet effect than aspirin does. 02:11 However, the bleeding risk is almost the same as aspirin. There is an increased GI toxicity with these patients, and in fact you can still get reduced gastric mucoprotection just like aspirin. There is a general consensus though that they are not as bad as aspirin. There is an increased renal risk, once again prostaglandin mediated autoregulation issues can cause kidney function issues. Remember this drug also is excreted via the kidney. 02:41 So patients who have chronic renal failure, are at risk for toxicity from these pills. 02:48 Renal damage and GI damage can occur with high dose parenteral ketorolac prescription. And that's usually after 72 hours. 02:57 So you have to watch these patients fairly closely. Now there are some hematologic reactions associated with indomethacin. 03:04 So once again you have to look at blood work on these patients that you're prescribing indomethacin to.

The lecture Nonsteroidal Anti-Inflammatory Drugs (NSAIDs) by Pravin Shukle, MD is from the course Inflammation Pharmacology.

Which of the following is NOT classified as an NSAID?

Which is NOT a side effect of most NSAIDs?

I love your lectures, you are such a talented proffesor. Great work.

I love your lectures, you are such a talented proffesor. Great work.